Why Trump’s Refugee Ban is Stupid 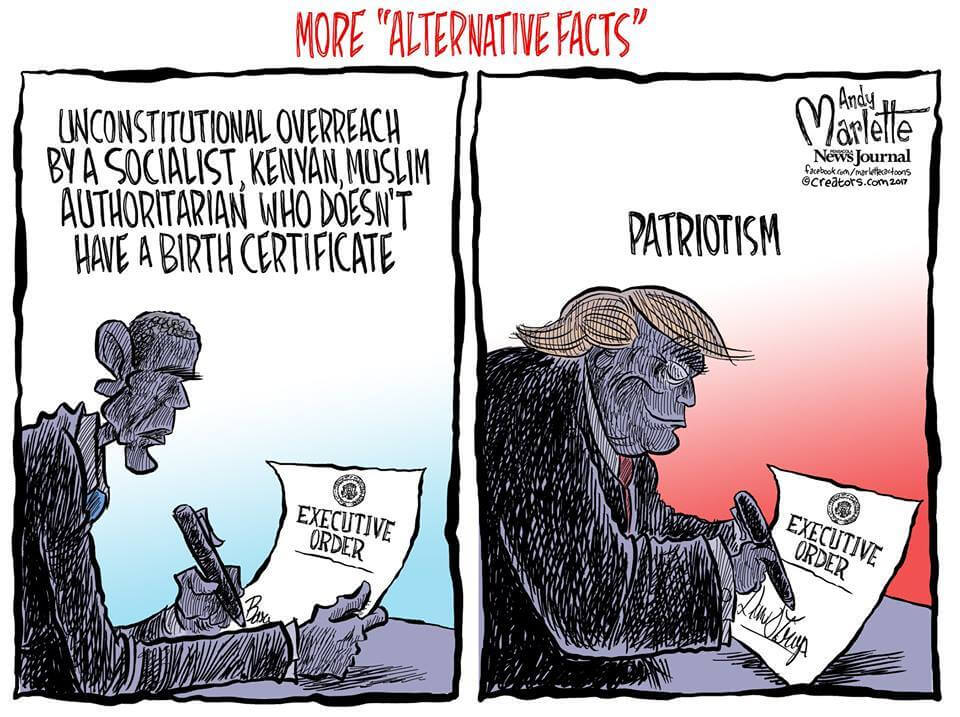 In short, it’s stupid because refugees are the safest of all immigrants to the country and it creates animosity where relationships most need development. Once again, Trump is building walls where he should be building bridges.

During the election, Donald Trump made all sorts of promises that appealed to a certain constituency. They had had a fear of Muslims whipped into them, and were left feeling desperately unsafe. Now he’s keeping those promises.

To be fair, it’s a good thing when a politician keeps their campaign promises.

The problem is, some of those promises are misguided and based on false premises and outright lies. In addition, some of the executive orders he’s making to keep those promises are unconstitutional. The most egregious example so far was late Friday afternoon US time. The order, among others things, bans all refugees for four months and indefinitely bans all Syrian refugees. (Full text here.)

Section 1 of the executive order includes the following sentences:

The visa-issuance process plays a crucial role in detecting individuals with terrorist ties and stopping them from entering the United States. Perhaps in no instance was that more apparent than the terrorist attacks of September 11, 2001, when State Department policy prevented consular officers from properly scrutinizing the visa applications of several of the 19 foreign nationals who went on to murder nearly 3,000 Americans. …

This makes it clear that it is previous terrorist attacks, especially 9/11, that are the basis for the order. The problem is, the countries those terrorists came from are not the ones the order bans. Most terrorists are US citizens that were radicalized at home. The others come from countries others than the seven in question.

Origin of US Terrorists

An analysis of the worst terrorists illustrates this point:

The 9/11 attackers came from Saudi Arabia (19), the United Arab Emirates (2), Egypt (1), and Lebanon (1). The Boston bombers (the Tsarnaev brothers) were born in Russia and brought up in the United States; their parents were not refugees but asylum seekers. The Florida nightclub shooter, Omar Mateen, was born in New York, the son of immigrants from Afghanistan. The couple who perpetrated the San Bernardino terrorist massacre were also not refugees. The husband was a USian born in Chicago (his parents were immigrants from Pakistan) and his wife was born in Pakistan though lived most of her life with her wealthy family in Saudi Arabia. She was admitted to the US as the wife of a citizen. Major Nidal Hasan, who killed thirteen fellow soldiers at Fort Hood was born in Arlington County, Virginia, the son of Palestinian immigrants.

Not a refugee in sight, and no mention of the countries Trump has targeted.

During the election campaign Trump famously announced that he was going to ban all Muslims from the country. He also spoke of plans for a Muslim registry.

There’s been some backing away from those positions, at least in public. Defenders of this latest move point to the fact there are dozens of other Muslim-majority countries with no ban-order as proof it’s not about Muslims.

However, although Trump is insisting it’s not a Muslim ban, Ana Navarro (CNN political commentator) says former KKK leader David Duke is celebrating this move as a Muslim ban.

Islamist Extremists are Laughing at Trump

Jihadist groups on Sunday celebrated the Trump administration’s ban on travel from seven Muslim-majority countries, saying the new policy validates their claim that the United States is at war with Islam.

Comments posted to pro-Islamic State social media accounts predicted that President Trump’s executive order would persuade American Muslims to side with the extremists. One posting hailed the U.S. president as “the best caller to Islam,” while others predicted that Trump would soon launch a new war in the Middle East.

“[Islamic State leader Abu Bakr] al-Baghdadi has the right to come out and inform Trump that banning Muslims from entering America is a ‘blessed ban,’” said one posting to a pro-Islamic State channel on Telegram, a social-media platform. The writer compared the executive order to the U.S. invasion of Iraq in 2003, which Islamic militant leaders at the time hailed as a “blessed invasion” that ignited anti-Western fervor across the Islamic world.

Warrick gives many other examples in his article.

And as recently as last week Trump was indicating that favouring Christians was part of the plan.

Watch this interview (below) with CBN’s David Brody. It starts with Trump announcing, “I’ve always felt the need to pray,” among other equally unbelievable statements, and also includes Trump talking about refugees.

(Note: Originally this was a YouTube clip of just the relevant part of the Brody interview. That YouTube account was later taken down. On 12 February I therefore changed it to this much longer video, which is the full interview from CBN.)

The portion on refugees includes this exchange:

Brody: … do you see them [persecuted Christians] as kind of a priority here?

Trump: Yes, yes. They’ve been horribly treated. You know, if you were a Christian in Syria, it was impossible, very, very, at least very, very tough to get into the United States. If you were a Muslim you could come in, but if you were a Christian it was almost impossible. And the reason that was so unfair is that the, everybody was persecuted in all fairness, but they were chopping off the heads of everybody, but more so the Christians, and I thought it was very, very unfair. So we are going to help them.

As is so often the case, Trump’s facts are “alternative”. It is not easier to get into the United States as a Muslim refugee. It appears that actually religion makes absolutely no difference to whether someone receives refugee status. (Of course, that’s the way it should be.) 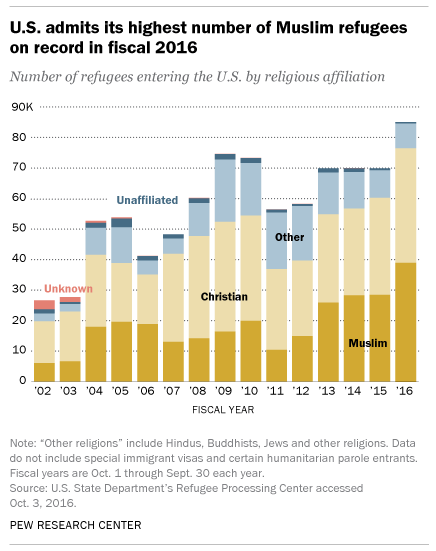 This executive order is a pretty major move which has far-reaching consequences. However, there was no consultation with the State Department (US equivalent of Ministry of Foreign Affairs) or Homeland Security before its drafting. Even the Trump appointee at Homeland Security, General Kelly, was apparently not spoken to. Further, they weren’t even informed about it until a few hours before it was implemented.

In addition, the chairman of the Joint Chiefs of Staff and the Director of National Intelligence are no longer Trump’s National Security Council. Their replacement is Trump’s chief strategist Steve Bannon. (See here.) That seems to me to be not just ill-advised, but outright dangerous.

Farah Pandith is a former State Department official for both President GW Bush and Obama. She is now a senior fellow of the Council on Foreign Relations. Pandith was the first ever Special Representative to Muslim Communities for the US State Department.

… strategy is flawed and doesn’t have any intellectual rigour. You have to get to the actual meat of the issue, which is ideas matter. Their ideas have no borders and you can’t build an “idea wall”. You can’t ban all the countries in the world in which the bad ideas are sprouting. So when you look at what is actually taking place and you think about what this is going to do, it really takes away from the goal that he has set out for himself. [To abolish Islamist extremism.] It doesn’t have the rationale that we need it to.

And it is very important to understand that both in the Bush administration and in the Obama administration we understood that the power to stop recruitment came from civil society. You can’t set up an “Us vs Them”. We need to have Muslims around the world working with us to stop recruitment. And the way to do that is to engage them. If you don’t have trust with a government you can’t engage them, you can’t galvanize the movement that we need, and I’m afraid what has happened here is that it has stoked the idea of a “Us and Them”, it has given power to the extremists, and it will not get us where we need to go.

Why Refugees to the US aren’t Dangerous

US politicians constantly conflate the two very different issues of refuges in Europe and the USA. In Europe, refugees can be dangerous. They come directly into Europe and the potential for terrorists to infiltrate them is high.

On 20 September, Trump’s eldest son sent out the famous “Skittles” tweet. The image on it is no longer available because of complaints from the makers of Skittles, but here’s what he said: 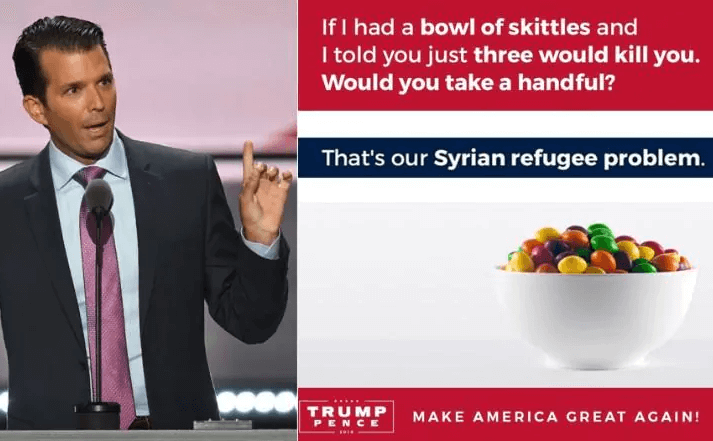 I prefer this version: 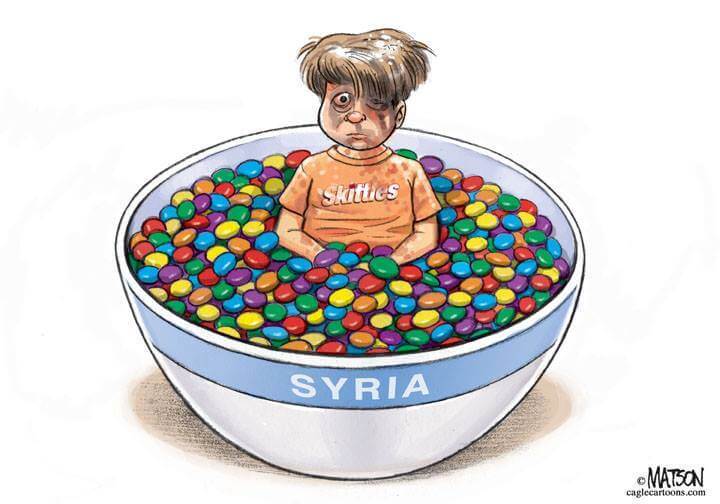 Either way, the analogy is flawed. A report from the Cato Institute in mid-September found, according to Vox:

As the Washington Post’s Philip Bump points out, adhering to Trump’s analogy, a bowl with three deadly Skittles (refugees) in it would need to contain 10.93 billion Skittles.

The Danger of Refugees

Chuck Todd presented this report on ‘Meet the Press’ back in November 2015, but it’s still relevant.

However, even he makes it seem easier than it is to get into the US – like there was just one interview and they could be on their way. The reality though is very different. Like New Zealand, Australia, and Canada, the US get their refugees via the UNHCR process. That process takes around 18 months to two years and involves multiple interviews by multiple agencies, all while living in a UN refugee camp.

All refugees are already undergo what any reasonable person would consider “extreme vetting”.

There is an extensive registration process for all refugees in UN camps. Those who want to go to a new country rather than return to their home register with the UNHCR. That registration includes in-depth interviews, reference checks, health screening and more. They even get iris scans for identification. Anyone who has been in the military is not eligible. Only a very small number get through this process.

This all takes several months. The few who have got this far then go through additional screening by the country they wish to enter. This is also carried out in the refugee camp.

Refugees that want to go to the USA

Our government performs its own intensive screening, a process that includes consultation from nine different government agencies. They meet weekly to review a refugee’s case file and, if appropriate, determine where in the U.S. the individual should be placed. When choosing where to place a refugee, officials consider factors such as existing family in the U.S., employment possibilities and special factors like access to needed medical treatment.

Every refugee goes through an intensive vetting process, but the precautions are increased for Syrians. Multiple law enforcement, intelligence and security agencies perform “the most rigorous screening of any traveler to the U.S.,” says a senior administration official. Among the agencies involved are the State Department, the FBI’s Terrorist Screening Center, the Department of Defense and the Department of Homeland Security. A DHS officer conducts in-person interviews with every applicant. Biometric information such as fingerprints are collected and matched against criminal databases. Biographical information such as past visa applications are scrutinized to ensure the applicant’s story coheres.

As is the case with several of Trump’s executive orders this week, it’s all about window dressing. This time though, the reality is going to have the opposite effect to what he wants to achieve. It is making the country, and the world, more dangerous not less.

Of course, it’s not working out nicely. There are protests all over the country and the world. Lawyers are providing help pro bono. Judges in multiple jurisdictions have issued stays to prevent parts of the order being enacted.

We can only hope that no one dies because of this latest stupidity.