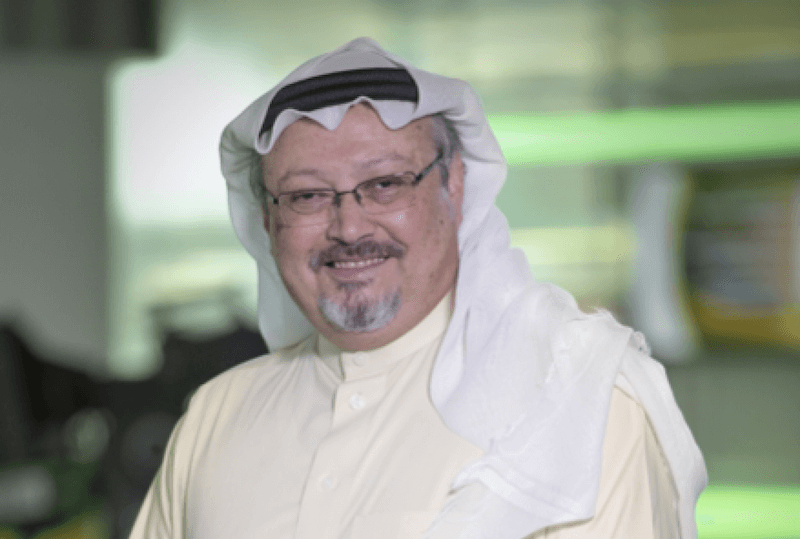 Each day for the last couple of weeks, I’ve been tweaking a post about Jamal Khashoggi. The post never quite gets to the completion stage, and developments overnight mean much of the post is redundant. Now, the story has been headline news for so long, as it should be, that there’s nothing I can say most people don’t already know.

The whole situation is absolutely appalling. It seems clear to me that there was a murder in the Saudi Arabian consulate, and from the start the Saudis have been trying to cover that up.

It also seems clear that the Turkish government knows exactly what went on, though they are not admitting to that. From the beginning they’ve been leaking details to friendly media, but not saying outright what they know. My assumption is this is because they have electronic surveillance inside the consulate. They can’t, of course, admit to that.

Turkey probably has human assets in the consulate too, but they would not be much help in this situation because it was an outside group that committed this atrocity.

What Happened to Jamal Khashoggi?

My guess is that the consulate staff in Turkey were under orders to detain Khashoggi, but were not part of the next part of the operation. It’s now common knowledge the murder squad came directly from Saudi Arabia for the job.

Initially it was possible to question what we were hearing about what happened for two reasons. Firstly, it was like a plot from a movie – it just didn’t seem real. Secondly, the source of all information appeared to be the Turkish government, which has reason to paint the Saudi government in the worst light possible. Therefore, Trump supporters had valid excuses for Trump’s reaction, or rather non-reaction.

However, since then the New York Times in particular has given us independent verification of much of he detail. They have evidence of who at least nine of the murder squad are, and their senior positions in the security services, military, and similar occupations in Saudi Arabia. In particular, that the head of the Saudi Scientific Council of Forensics, Dr Tubaigy, was part of the squad and did indeed take his BONE SAW on the trip to Turkey. Unless it’s his equivalent of a security blanket that he needs to take everywhere, I can’t see the need for a bone saw on a rendition operation!

If you have a spare seventeen minutes, this video from Rachel Maddow/MSNBC includes a good summary of what happened and includes the information from the New York Times.

Since those in charge in Saudi Arabia began to realize they’re not getting away with the story that Khashoggi left the consulate by another door where the cameras weren’t working, they’re trying a new story. That, as we know, is that Khashoggi accidentally died following the injection of a tranquilizer. Why did he need a tranquilizer? So he could be taken back to Saudi Arabia against his will. Because that, in the eyes of a government that does whatever it wants to its people, would be okay. This shows an appalling attitude to Press Freedom and explains why Saudi Arabia ranks at 169/180 on the World Press Freedom list. (Just think though – eleven countries are even worse!)

President Trump’s reaction to this situation is about as weak as it gets. For someone who has such an obsession with letting everyone know how strong he is, he is signalling the exact opposite.

Trump “has had harsher words in the last week or so for Stormy Daniels, Senator Elizabeth Warren and Taylor Swift, than he has had for the Saudis responsible for the likely butcher and slaughter of a Washington Post columnist,” points out @jaketapper https://t.co/12qaYjEPmU pic.twitter.com/Cmd8slnG8k

In what little he has said publicly, and only once it became impossible to deny that Khashoggi was likely dead, Trump has tried to blame “rogue killers” for the incident. Seriously? A fifteen-man team flew in two private jets with special clearance from Saudi Arabia virtually as soon as Khashoggi got to the consulate. Khashoggi was killed INSIDE the consulate, his body dismembered, and it was taken to an OFFICIAL residence for disposal. Then the men got back on the private jets and went back to Saudi Arabia. The Saudi government knows who the men were, and none appears to have suffered any consequences for their actions. This is Trump’s idea of “rogue killers.”

Of course, despite what he says, he is beholden to the Saudis. There aren’t that many people in the world who can afford apartments in Trump Tower. Most of those who aren’t Russian mafia and actually want to live in a building emblazoned with the “TRUMP” in big, gold, letters, are corrupt Saudis. Further, there was plenty of boasting about Saudi money on the campaign trail and since. It’s only now that it matters that suddenly he says he doesn’t have any financial connections to them.

Trump fans can make all the noises they like about arms deals, but surely a man’s life is more important than selling a few killing machines?

International View of US Leadership

Donald Trump has an obsession with appearing strong. In his opinion, before he came along the US didn’t have the respect of the rest of the world because it was weak. Now, he thinks that thanks to his leadership the US appears strong again. 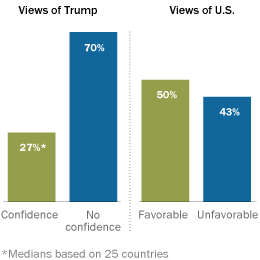 It’s hard to know where he gets that impression. Polling by respected organisations like Pew Research and Gallup show the opposite is true. Respect for US leadership is currently lower than it has ever been.

In January this year, Newsweek published a piece with the title, ‘GLOBAL RESPECT FOR U.S. LEADERSHIP DROPPED SHARPLY UNDER TRUMP—THE OPPOSITE HAPPENED UNDER OBAMA‘. It got its data from Gallup.

There are plenty of other surveys I could quote, and they all have the same result. The opinion of the rest of the world towards the US has gone down since Trump became president. And, it’s because of Trump. It’s specifically him that’s the problem as the graphic from Pew Research shows.

Before Trump became president, the US had the respect of the world for the stance they took on human rights. Even if they didn’t always do the right thing, they always spoke up for what was right. Other world leaders felt that the most powerful voice in the world, whether he was a Democrat or Republican, was on the side of protecting human rights and freedom of speech. They no longer feel that. 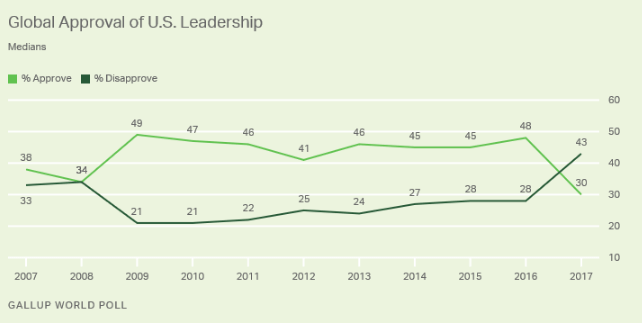 By aligning himself with the world’s dictators, Trump frequently appears like a gang prospect, willing to demean himself in any way to get in with the group. They use him to make themselves appear more legitimate, as he imagines he appears stronger for being in their company.

Trump Attitude to Freedom of Speech

Trump took an oath to “… preserve, protect and defend the Constitution of the United States”. He has not been living up to that.

Trump’s commitment to one of the core values of his country – freedom of speech – appears to be lacking. There was plenty of evidence of this before he became president. His people should be able to expect that would change on swearing his oath of office. It seems it hasn’t. He is siding with the leader of a foreign country against the principles of his country’s constitution. Jamal Khashoggi may not have been a US citizen, but he was living and working there and entitled to the protection of its laws. Khashoggi’s fiance, who waited outside the Saudi consulate for eleven hours before calling authorities, has a right to expect the US president to at least speak up on his behalf.

Today PEN America is suing President Trump for using the power of the state to retaliate against the press, in violation of the First Amendment. https://t.co/eiYitnOqeI

In the three years that Donald Trump rocketed from candidate to president, the PEN American Center has criticized him as a bully, an autocrat, a user of hate speech and an enemy of free expression. It has published studies, organized petitions and established a Press Freedom Incentive Fund.

Now the literary and human rights organization, which includes thousands of authors and journalists, is taking a more direct step: PEN is suing the president.

In a suit filed Tuesday in federal court in Manhattan, the center, also known as PEN America, alleges that “official acts” by Trump have “violated the First Amendment and his oath to uphold the Constitution.” PEN cites such examples as reports that Trump was meddling in the proposed merger of AT&T and CNN, a frequent target of Trump’s anger (The Justice Department has sought to block the merger).

The suit also notes Trump’s comments on Washington Post owner and Amazon.com founder Jeff Bezos. Trump, unhappy with the Post’s coverage, has threatened antitrust action against Amazon and suggested raising its shipping costs. According to the Post, he has pressured U.S. Postmaster General Megan Brennan to double the rates. (Last week, the United States Postal Service proposed some hikes for 2019, among them increases which would affect Amazon. Shipping costs have been raised several times over the past decade).

The Legacy of Jamal Khashoggi

Khashoggi was working for the Washington Post while living in the US. Today they published his last column. His editor received it the day after his disappearance. She says:

I received this column from Jamal Khashoggi’s translator and assistant the day after Jamal was reported missing in Istanbul. The Post held off publishing it because we hoped Jamal would come back to us so that he and I could edit it together. Now I have to accept: That is not going to happen. 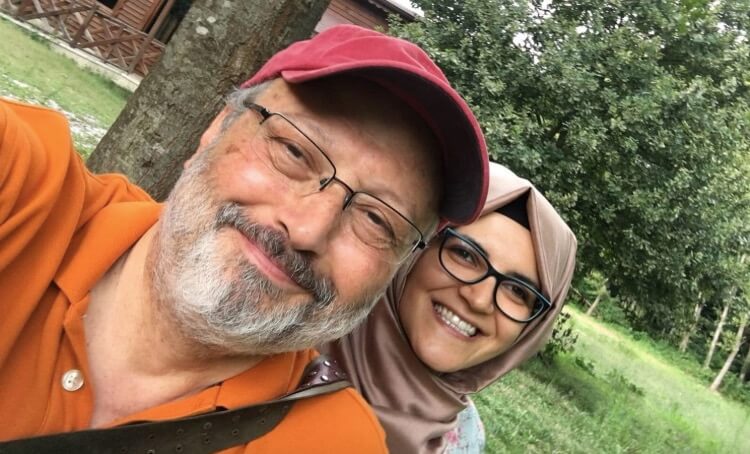 Jamal Khashoggi with his fiance Hatice Cengiz in happier times.

The title of the column is ‘What the Arab world needs most is free expression’. It was for writing columns like this that Khashoggi fell afoul of the current Saudi regime. In the long run, “the pen is mightier than the sword”. However, Khashoggi is another writer who gave his life to the cause of Freedom of Speech. We must stand up to those who try to silence free speech, especially those of us lucky enough to live in a country where there is no fear attached to expressing our opinions openly. They cannot kill us all. 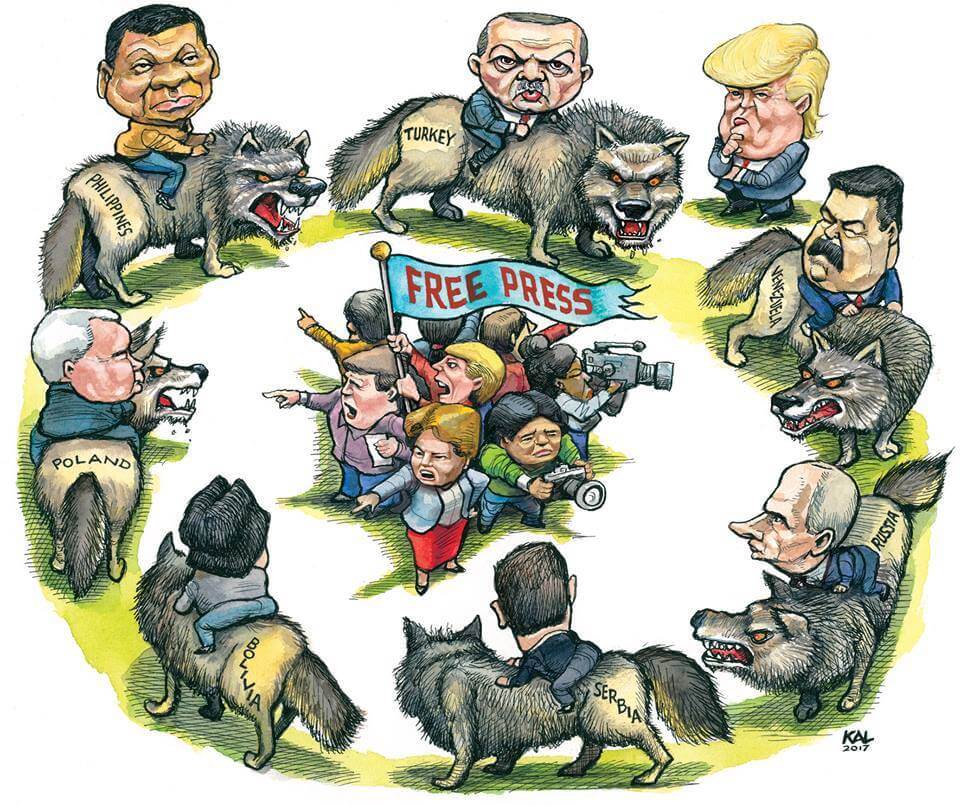