On 26 January 2016 (US Time), Bret Baier, host of Fox News’s Special Report, announced who had qualified for the final Republican debate on Thursday 28th January 2016 US time before the Iowa Caucuses on Monday 1 February. The line-up was to look like this:

However, within a short time Donald Trump was making an announcement of his own – he would not be taking part. The problem? He thinks Megyn Kelly asked him an unfair question in the 1st GOP Debate back in August. He considers that proof she is opposed to him and demanded she be removed from her job as moderator. When Fox refused, Trump issued this statement on Instagram, and did a poll of his Twitter followers to decide whether he would attend the debate. 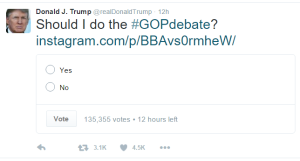 We learned from a secret back channel that the Ayatollah and Putin both intend to treat Donald Trump unfairly when they meet with him if he becomes president — a nefarious source tells us that Trump has his own secret plan to replace the Cabinet with his Twitter followers to see if he should even go to those meetings.

Fox is right to mock him. I saw an interview this afternoon that Bret Baier did with Donald Trump after the above statement was released but before he’d made his final decision not to attend the debate. Trump was really angry – I seriously would not have wanted to be anywhere near him. He looked like if he had been in the same room as Baier he would have attacked him. Trump barely held it together.

I’ve never been able to understand his problem with Kelly’s question either. Yes, it was tough, but from the start he seems to have expected that he should get special treatment, especially from a Republican-supporting network like Fox. This is the guy who’s apparently going to show DAESH a new tough attitude, and do great deals with Iran, but he can’t handle a supposedly unfair question from a journalist.

And quite apart from anything else, the question wasn’t unfair. Judge for yourself:

The fallout from this question is still with Trump. In December I wrote a post going over Trump’s abuses of various groups of people, all of which he dismisses as people being too politically correct. My paragraph about the Kelly incident went like this:

The earlier Fox News Republican debate was another occasion that revealed Trump’s anti-women stance. He didn’t like a question from moderator Megyn Kelly who asked him: “You have called women you don’t like ‘fat pigs’, ‘dogs’, ‘slobs’, and ‘disgusting animals.” His initial response was, “Only Rosie O’ Donnell,” as if that made it okay. He later said that the reason he had a problem with Kelly’s question was he didn’t recognize any of the quotes as his. (The Huffington Post found them all and more.) Then he insinuated that the reason for what he considered bad questions was she must be menstruating. He tried to lie his way out of that one too by mumbling about nose bleeds.

Other women Trump as made negative personal comments about or insulted are fellow Republican candidate Carly Fiorina as well as Angelina Jolie, Cher, Bette Midler, and Sarah Jessica Parker. The Huffington Post article also describes some of the general anti-women comments Trump has made in the media.

We’ve already had him threaten not to turn up to a debate. On 1 December 2015, he demanded US$5 million to attend the CNN debate, which he said would be donated to veterans’ charities. He apparently sent a letter to CNN president Jeff Zucker writing:

While I refuse to brag, and you know very well, this tremendous increase in viewer interest is due 100% to Donald J. Trump. … I won’t do the debate unless they pay me 5 million dollars.

On 3 December 2015, Jeff Zucker announced that CNN wouldn’t be paying the money. From CBS News:

CNN President Jeff Zucker said Thursday that the network will not pay Republican front runner Donald Trump $5 million in order to secure presence at their upcoming debate, despite Trump’s demands.

“We do not pay candidates to appear,” Zucker said during an interview with BuzzFeed editor Ben Smith at the Paley Center for Media.

Trump appeared at the debate.

People who know (I don’t) say Trump has Narcissistic Personality Disorder. Psychology Today has a couple of articles discussing whether this is the case.

Candidate debates are job interviews. They’re about choosing the best candidate to run the country – in this case the most powerful nation in the world.

This is going to be a great opportunity for the other seven candidates on the stage. They will get more speaking time, they’ll be able to go after Trump without him having the opportunity to respond, and all that will be seen by millions of voters just before the first caucus.

Trump has made the following statement a pinned tweet (meaning it’s the first thing anyone sees when they go to his account: 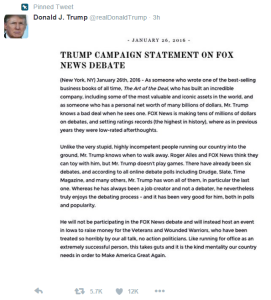 This looks like it was written by Trump himself – it sounds just the way he talks. Here’s another tweet he’s sent out since the announcement:

I despair at the number of Republicans who planning to vote for Trump. They appear completely blind to the character of the man – in fact many admire him for the his ignorance, sexism, and bigotry. He’s made that sort of behaviour acceptable for a large cohort of USians. In an ABC/Washington Post poll released Tuesday, Trump was at 37%, 16 points ahead of his nearest rival. A CNN/ORC poll released the day before has Trump at 41% – 22 points ahead of his nearest rival. His ongoing success at the polls leaves me seriously terrified that this man could be in charge of the most powerful country on earth in a year’s time.