Trump is a Fu€ki₦g Moron re JCPOA 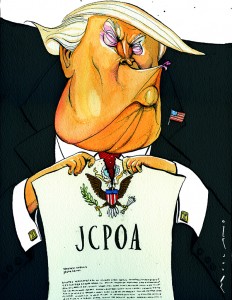 I can’t believe this is happening. Well I can. But I held onto hope overnight that someone would talk him out of this. However, I awoke to the news that President Trump has actually announced that he’s pulling the US out of the JCPOA (Joint Comprehensive Plan of Action) aka the Iran Nuclear Agreement.

The man is a complete fu€ki₦g moron.

Trump’s announcement in support of his decision was a series of lies and erroneous conclusions. I suppose though if he was honest he would not only be retaining the JCPOA, he’d be endorsing it.

As I should have expected, one of the first lies was a repeat of the one that the Obama Administration GAVE Iran billions in cash. See my two posts about the JCPOA here and here to see the reality of that situation.

The next lie was was this statement:

A constructive deal could easily have been struck at the time, but it wasn’t.

The truth is negotiations were ongoing for nine years before the JCPOA was signed. There was nothing easy about getting a deal, and it is extremely unlikely a better deal could be had.

He even referred to Netanyahu’s joke of a presentation last week. He said of it, that it provided proof that Iran was lying at the time of the deal. As I wrote just a couple of days ago, everyone knew that. That’s the very reason the IAEA (International Atomic Energy Agency) inspections of Iran are the toughest put in place for any country, ever. This was precisely because the US and others signing the deal KNEW that Iran was lying about the existence of a nuclear programme. 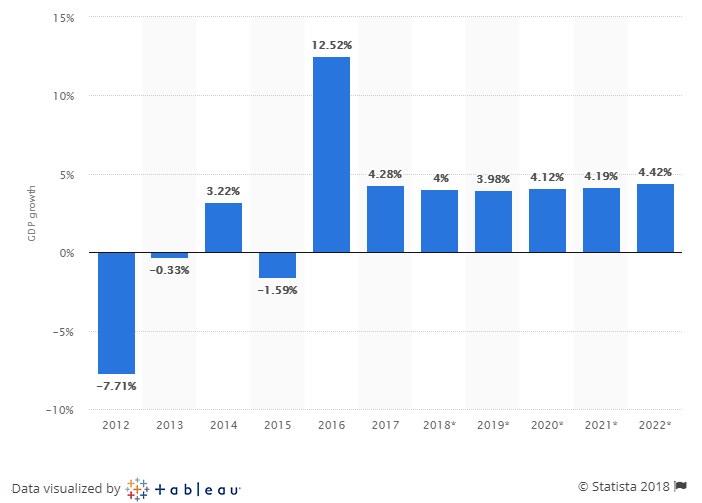 Another lie in Trump’s presentation is that Iran’s economy is doing “very badly.” That is important, because one of the hopes of the negotiators was that integrating Iran more into the world economy would restore it’s good international relationships.

Since the signing of the JCPOA in 2015, Iran’s economy has been improving. In their economy grew a massive 12.52%. Before 2015, Iran frequently had negative economic growth. Figures for 2017 are not yet available, but estimates are that GDP grew 3.46%, and that growth will continue to maintain a good rate.

Of course, that has now been put at risk by Trump’s decision. He is on record as saying that countries can get in via trade whatever else is going on between them. I guess he’s ignoring that when he wants to, as usual. 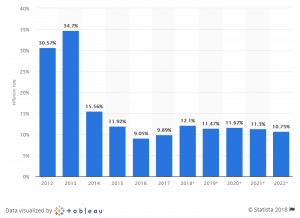 Iran’s inflation rate has also dropped significantly since it once again became part of the international economy.

In 2012 it was 30.57%, and in 2013 it was even worse at 34.7%. At that point, there was a lifting of some of the international sanctions as Iran were complying with some preliminary agreements under the JCPOA. These preliminary conditions were there to encourage Iran to see the positive benefits of the full JCPOA. This saw the 2014 inflation rate drop to 15.56%.

Since the signing of the full JCPOA, the inflation rate has dropped further still. It currently fluctuates between 9% and 12%. That’s still very high of course, but significantly better than five years ago. 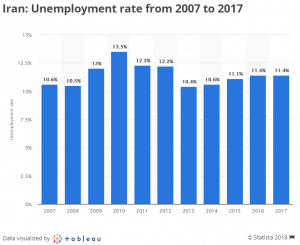 So far the trend of the unemployment rate since the implementation of the JCPOA is hard to determine. It’s gone down, but then up again (though not as high as before), and doesn’t appear to have settled. However, the unemployment rate is almost always the last economic indicator to improve when the economy improves.

Trump’s plan to put strong economic sanctions back on Iran will have a negative effect on their economy. It will not stop them doing anything they wish in relation to military developments. As everyone with any sense knows, isolating and threatening a country makes them spend more on their military, not less. The extreme example of course is North Korea, who starved their people rather than reduce what they spent on nuclear weapons development.

Trump says the Iranian government made use of some the extra money it had following 2015 to build nuclear-capable missiles and fund terrorism. That is probably true. However, Iran was doing that before the signing of the JCPOA

Funding terrorism is against international law, and if the US government (or anyone else) can provide proof, they should provide it to the international courts. It is not a reason to pull out of the JCPOA, which currently makes it all but impossible for Iran to get a nuclear weapon. The region and the world would be much less safe if Iran was also able to provide nuclear weapons to terrorists.

The agreement was so poorly negotiated that even if Iran fully complies, the regime can still be on the verge of a nuclear breakout in just a short period of time.

This is simply not true. Trump also refers to the “sunset clause” in the agreement. Some of the agreement, such as the IAEA inspections for example, are to continue in perpetuity. Here’s Obama’s comment (see below for his full statement) in relation to Trump’s claim that the JCPOA expires:

… the JCPOA does not expire. The prohibition on Iran ever obtaining a nuclear weapon is permanent. Some of the most important and intrusive inspections codified by the JCPOA are permanent. Even as some of the provisions in the JCPOA do become less strict with time, this won’t happen until ten, fifteen, twenty, or twenty-five years into the deal, so there is little reason to put those restrictions at risk today.

If I allowed this deal to stand, there would soon be a nuclear arms race in the Middle East. Everyone would want their weapons ready by the time Iran had theirs.

Trump goes on to say:

Making matters worse, the deal’s inspection provisions lack adequate mechanisms to prevent, detect, and punish cheating and don’t even have the unqualified right to inspect many important locations, including military facilities.

Again, this is a lie. The inspection provisions are the toughest ever put in place. They include the inspection of military facilities. They do have to give notice before inspecting military facilities, but the residue of nukes isn’t that easy to get rid of even if they’re removed. The IAEA states they are confident that if Iran cheats on the provisions of the JCPOA, they will find out. Further, by getting rid of the agreement, there will be no inspections at all! How is that an improvement?

Trump is correct that the JCPOA doesn’t address Iran’s development of missiles that could be capable of delivering nuclear warheads. It never pretended to. Rather than disposing of the JCPOA because it doesn’t include Iran’s missile development programme, which is currently completely legal, he could work on a new agreement which tackles that. He could be the hero to many on the West he wants to be if he was to negotiate a deal that did something about Iran’s missile development programme.

Trump is also correct with his statement, “… the deal does nothing to constrain Iran’s destabilizing activities, including its support for terrorism.” As mentioned above, Iran’s activities such as their support for Hamas and Hezbollah are illegal under international law. However, there are international laws, such as banking laws relating to transfer of funds for the purpose of terrorism, that are in place to stop such things. There would be no point putting them in the JCPOA too. I’m sure that if such activity was able to be proven, the US would be taking Iran to the ICC. This is not a reason to pull out of the JCPOA.

Trump’s understanding of the JCPOA appears to be completely flawed. But even if all his criticisms of the agreement were accurate, he’s still doing the wrong thing. He believes that when the deal expires in 2025, Iran will immediately have nuclear weapons. So he thinks that instead the correct thing to do is trash the agreement now, meaning they would have nuclear weapons now. Trump is a fu€ki₦g moron.

The country with the most to fear from Iran is clearly Israel. President Netanyahu is completely paranoid about the country, although I can understand why. He has made an announcement supporting Trump’s announcement. There are plenty of others though, including a large group of military and security officials within Israel, who support the retention of the JCPOA. Netanyahu is the ONLY international leader to support Trump. All others who have made statements have condemned the move.

Further there is a US group calling themselves The Iran Project. They describe themselves as:

Dedicated to a balanced, objective, and bipartisan approach to preventing Iran from acquiring a nuclear weapon.

On 27 March 2018 they released a statement urging Trump to retain the JCPOA. This was their announcement about the release, which you can read at the link (pdf):

It’s an excellent summary of the reasons for retaining the JCPOA, and I urge you to read it. It is especially good on the importance of US leadership and reputation, which Trump is damaging by this action.

Trump announces himself “ready, willing, and able” to negotiate a new deal. Who the fu€k does he think he is? The rest of the world does not want a new deal. We are all quite happy with the old one negotiated in conjunction with China, France, Germany, Great Britain, and Russia. It took nine years. He’s just destroyed all that on a whim. So much for the US not interfering in the activities of the rest of the world. He’s just taken the ball away that the rest of the world was playing with happily, and says he will give everyone a new one of his choosing if they are nice to him. I repeat, who the fu€k does he think he is? 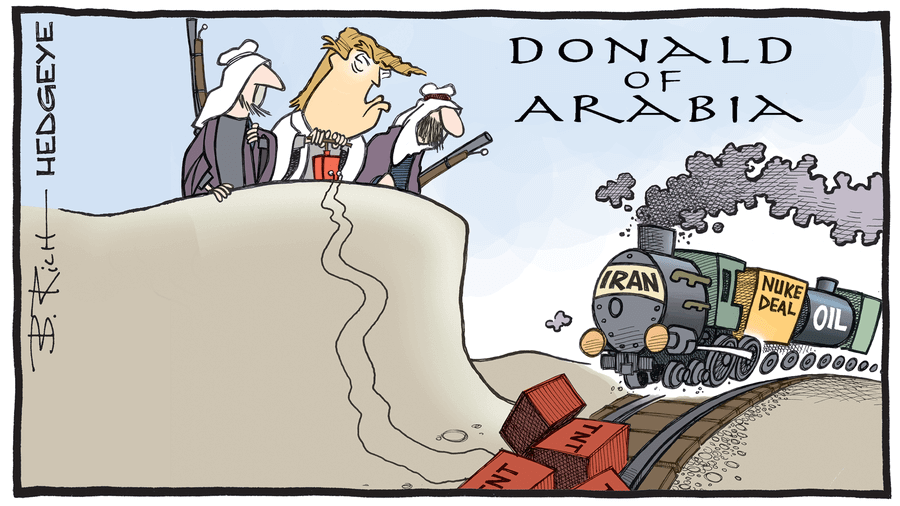 If World War III starts in the Middle East, it will be his fault. That will be his legacy. Maybe this is why the Evangelicals like him so much. They think his actions will result in the return of Jesus. Their delusion becomes the death of millions.

You probably think I’m being too dramatic, and maybe I am. After all, despite being a complete a$$ho£€, the Ayatollah is not a fool. He is actually unlikely to start a nuclear war, and will try to keep the JCPOA going with the remaining partners.

Remember though: this Islamic fundamentalist is now in a position to take the moral high ground. I imagine he’ll take full advantage of the situation. We should be wary of that.

Here’s the full transcript of Trump’s announcement from the New York Times.

It’s not usual for a previous president to comment on the actions of a current president, and that’s as it should be. Normally I would not support Barack Obama speaking out on a situation the current regime was facing unless it was to be supportive. In this case though I think he’s done the right thing. Here’s Obama’s Facebook post relating to Trump’s actions regarding the JCPOA.