Why is Trump is Expanding the Use of Asbestos in US? 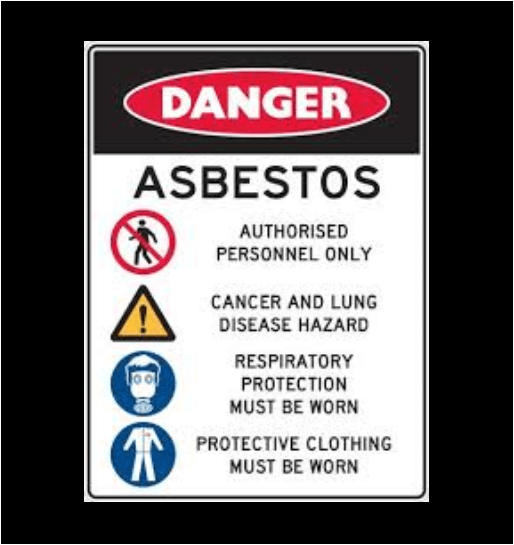 This quick post about Trump and asbestos is mainly to let you know I’m still here, as well as to bring an un-effing-believable situation to your attention. I’ve had my new chair for about ten days. I assumed everything would be hunky-dory as soon as I got it, but it’s not working out that way. Unfortunately, my body is having trouble adjusting, and writing is still difficult.

Anyway, Ann German sent me a tweet about Trump allowing asbestos back into the manufacturing process in the US for some products. Reading about it led me down a rabbit hole. The more I read, the more outrageous the situation looked to me.

In fact, I really can’t believe it’s real. Except it is. It’s the sort of thing you’d expect to read in The Onion!

I’m sure most of you are aware of what asbestos is, and what it does. New Zealand banned blue and brown asbestos in 1984, and white asbestos in 1999. 54 other nations also ban it. Another fifteen, including the US, place tight restrictions on its use.

According to mesothelioma.com (Mesothelioma is a cancer asbestos causes), “… 107,000 workers die each year from a[n asbestos] related disease. In addition, several thousand people die from asbestos in the environment each year.” 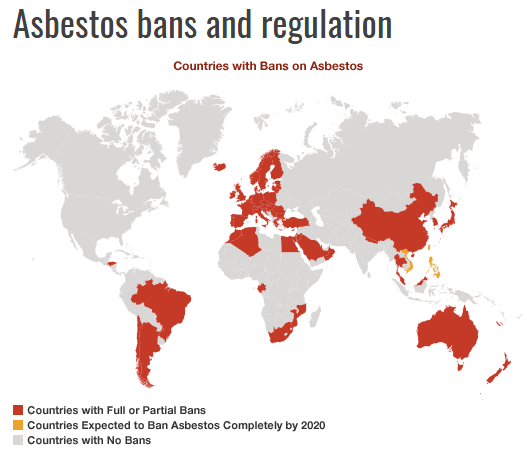 This video describes what asbestos is, and what it does.

So hopefully, we’re all agreed. Despite all its amazing benefits, we shouldn’t be using asbestos in our home and work environments.

However, President Trump has just loosened what restrictions there were in the US. He’s therefore putting the health of USians at risk. Some may even die because of his action. Worse, the reason why may be about personally enriching himself, and therefore fraudulent. Further, he may be breaching the Emoluments Clause of the US Constitution.

President Trump apparently does not believe the science when it comes to mesothelioma, asbestosis, and the other causes of death related to this mineral. The Washington Post reports:

… Trump has long expressed skepticism about its potential health effects after it is applied. In his 1997 book, “The Art of the Comeback,” he wrote that he believed that anti-asbestos efforts were “led by the mob.” In 2012, he tweeted that the World Trade Center would not have burned down had asbestos, which is known for fire-resistant properties, not been removed from the towers.

I’ve got no idea how “the mob” would benefit from protecting people from mesothelioma and the rest, but then I’m not a conspiracy theorist.

Just like he believes climate change science is a hoax created by the Chinese, this too is apparently a conspiracy. I guess that’s why he’s happy to take away the healthcare benefits of many of the sufferers of conditions like mesothelioma that they got via Obamacare.

Where does the US get its Asbestos?

Until recently, the US bought most of its asbestos from Brazil. However, because of the dangers, they stopped their mining operations recently. Now, there’s only one major miner of the mineral in the world, and it’s in Russia. So, by this move, Trump has just made a Russian company more profitable. That might be a coincidence, except for a post on Facebook from that company.

Uralasbest, or Ураласбест, put this on it’s Facebook page on 25 June. The first words, “Дональд на нашей стороне!” mean, “Donald is on our side.” And yes, that’s his picture on their product.

According to the Washington Post again, the words on the seal read:

“Approved by Donald Trump, 45th President of the United States,” … according to a translation supplied by the Environmental Working Group, a nonprofit focused on human health and the environment that flagged the posting.

The Factory ” Uralasbest ” released an unusual batch of chrysotile: on the package of palletov with the mineral, the stamp ” approved by Donald Trump, the 45th President of the united states “. in such an unusual way, the workers of the asbestoobogatitelʹnoj factory of the factory thanked us President Donald .

He supported the head of the U.S. Environmental Protection Agency Scott Pruitt, who stated that his office would no longer deal with the negative effects potentially derived from products containing asbestos. Donald Trump supported a specialist and called asbestos “100 percent safe after application”.

” we have come out with the initiative – to support our hrizotilovuû industry in this way and to remind that our ” Mountain Len ” is an important mineral for the world. Management Approved!”,-told at the factory.

Not exactly perfect English, but you get the gist. The (former) Administrator of the US Environmental Protection Agency (EPA), Scott Pruitt, has found a “specialist” who says asbestos is “100 percent safe after application”. Trump is supporting that specialist. Not only that, Trump’s seal of approval is on pallets of the product! 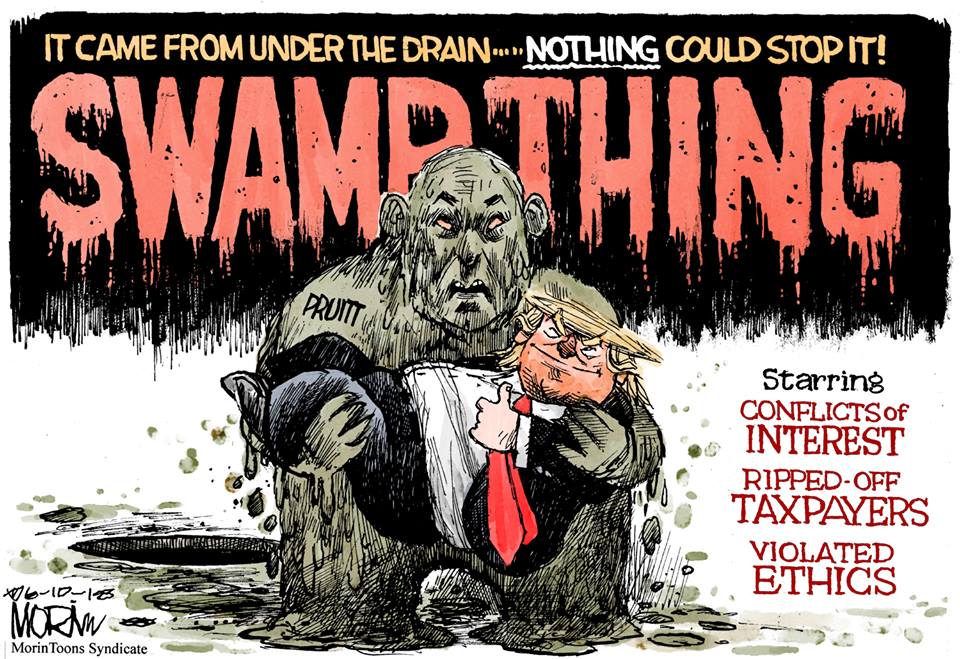 Pruitt resigned on 6 July, facing at least 14 separate investigations by the Government Accountability Office (GPO). As far as I know, none were related to this issue.

Trump, of course, is currently being investigated by an FBI team led by Robert Mueller. We do not know what, if anything, Mueller has on Trump, and we do not know if this situation is part of the investigation. In my opinion, this whole situation looks dodgy at best. A US president should not be endorsing a commercial product, especially one produced by another country that has known health risks. WTF is going on here?

I found a cartoon about this situation.

If you’re missing the tweets, check out the ‘Hili Dialogue’ on the Why Evolution is True website each morning. I send some to Jerry Coyne most days, and that’s where he puts them, along with a few from other friends.