The Vigilant Christian’s Response to the New Harry Potter Prequel 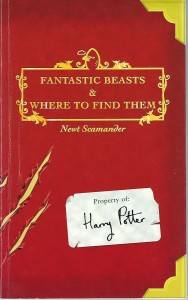 I saw something I consider falls into the category of “great news” yesterday: in 2016 the new Harry Potter prequel is coming out. I love the Harry Potter books and movies and I’ve been looking forward to Fantastic Beasts and Where to Find Them for a while. Fantastic Beasts and Where to Find Them by the fictional Newt Scamander is, you may remember a text book at the equally fictional Hogwarts School of Witchcraft and Wizardry.

The book (actually by JK Rowling of course) was published for real back in 2001 along with Quidditch Through the Ages ostensibly by Kennilworthy Whisp, supposedly a Hogwarts School library book. All the royalties from the two book were donated to Comic Relief. Now the title of that book is being used for for the new movie.

It’s only 1:56 long, but it’s prompted a 15:38 response from someone who calls himself “The Vigilant Christian.” You won’t believe what he’s managed to “deduce” from this trailer. The Vigilant Christian tells us, “This is a movie that no Christian should be watching,” and, “… you just need to look at the title to know this.” Apparently, “This is part of the agenda to bring about the anti-Christ kingdom.”

Anyway, you can check out his bizarre analysis for yourself:

I had to break up my viewing into a couple of parts – I couldn’t cope with it all in one go! The mind of a conspiracy theorist is a very strange thing.

He starts off with the title. “Obviously ‘Beasts’,” he says, “is something that references the Bible.” Calling beasts, which he informs us are really devils/fallen angels and are “real entities”, fantastic is just too much for the poor man to bear. And it gets worse! The first “s” in “Beasts” is in the shape of a snake, or dragon, a symbol for Satan from the Bible. “It’s not [a] coincidence that we see the devil hiding in plain sight in ‘Fantastic Beasts’,” he warns.

He goes on, “They want to teach us about the fantastic demons that come from Satan and where to find them in a movie that is pure satanic witchcraft?” The poor bloke is horrified. He spends some time on a few verses from Deuteronomy (where else!) that have the words “wizard” and “abomination” near one another to make his point about how evil wizards are.

He then moves onto the symbolism he sees in the trailer’s images, drawing his bow longer and longer. The sight of a pentagram he seems to find particularly shocking, and dismisses the idea that the one in the trailer is the original meaning of the symbol. (It was initially a sign of good.) “They believe that by standing in this [pentagram] they can receive power from the entities that reside on the other side – the ‘Fantastic Beasts’!”

Even one of the characters opening a suitcase is significant – it’s a symbol of “them” looking for demons so they can break through into “the third dimensional reality.” We warned to keep the picture of the character sitting on a bed in mind as “… this is literally a sign of spiritual darkness breaking through.” And The Vigilant Christian knows – he was into contacting these evil entities “just like JK Rowling … before he knew the Lord Jesus Christ.” Well, that settles it! Now I’m convinced! :-/

According to The Vigilant Christian, this is all about depraved man “in opposition to the Lord” and in league with Satan trying to bring about an evil kingdom. We’ve already got children into this via the Harry Potter books, and now we’re doing it again.

He predicts that because of this movie brainwashing children with “occultism and this type of propaganda” we’re going to see “a surge, an uprising of demons that are now going to be summoned to our realm.” This, he believes, “… is going to create the atmosphere necessary for the End Times.”

Brothers and sisters in Christ, join me in prayer in these End Times against this spirit of anti-Christ that is now manifesting in the world today. We speak not against flesh and blood but against principalities and powers. It is not JK Rowling that is the enemy; it is spiritual entities. She is the seed. Satan deceives all of his minions. He is the father of lies, and is completely incapable of telling the truth to those who decide to follow him.

Those who have decided to follow them are being deceived by the father of lies, the greatest deceiver and liar that has ever existed. That serpent, the Devil, who leads the whole world astray with his well-crafted, subtle deceptions. So we need to have a heart of compassion and seek to pray for those that are in this deception, as I once was deceived by the fantastic beasts who reside on the other realm. But the Bible says not to contact, not to summon, not to dabble in occultist stuff and somehow in our End Times generation this is going to be one of the biggest movies I bet.

Thanks for taking the time. This is The Vigilant Christian saying God Bless each and every one of you. And when we can so clearly see the spirit of anti-Christ manifesting in the world, turning things that are an abomination to the Lord into entertainment for the masses, to de-sensitize them to the occult, and also to create a desire to dabble in these things, we need to stay one hundred percent vigilant and fear no evil.

I kept thinking he was finished, but he had to make sure we know Satan is a liar. At least he’s not calling for JK Rowling to be killed as other extremist religions do in the same situations. After the above, you still have to get through a few Bible verses to get through accompanied by music before the video is finished.

This would all be a joke, except these people have control over the minds of children.

The Landover Baptist Church website has a section called:

Focus on Family – Christian Parenting: A place where parents can get good Godly advice on how to raise a family: how to properly administer corporal punishment, which movies to avoid, and more!

On there is a post called 12 Reasons Harry Potter Should be Banned. New Zealanders will be interested to know that our own (self-proclaimed) Bishop Brian Tamaki is a forum member on the website. At the end of the post, which mainly focuses on the supposed occultist and Satinist elements of Harry Potter, a commenter called Pastor Ezekiel (who describes himself as “putting the ‘stud’ back into Bible study”) adds:

I’ll add one more to your list, Brother Jeb. In addition to their promotion of witchcraft, the Harry Potter books also promote HOMERSEXURALITY! It’s true! The old hag who wrote the books even admitted it HERE!

Now I ask you; if the headmaster of their witch school is an old queer, why shouldn’t everyone else be a queer too?

Won’t someone please think of the children!?

I bet Dumbledore thought of the children!

Eww, I think I just grossed myself out.

Enough said really. As so often with religious extremists, they’re obsessed with the sex lives of others and seem to be abnormally psychologically developed in regards to sexuality.

They then re-post an article called Harry Potter Books Spark Rise In Satanism Among Children! This article, which they appear to be taking seriously, comes from The Onion!

Proud supporter of Anyone But Obama For President/Exorcist-in-chief 2016!

I’d think this was all a joke, except I know that Focus on the Family is a real organization, with a branch in New Zealand. 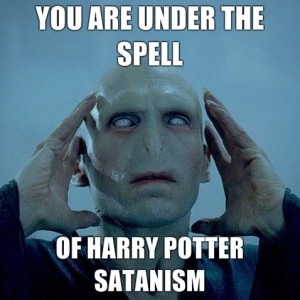 I obviously don’t agree with what these people believe about the Harry Potter franchise. In fact, not only do I think they’re wrong, I think this part of their beliefs is really stupid. However, they are, of course, entitled to them and (unfortunately) to pass them on to their children.

But I think a far better approach would be to let their children read the books and see the movies if they want to, and explain why they’re in contradiction with their beliefs. They should do that calmly and openly and especially without scaring them with tales of demons and evil entities.