The NRA Bait and Switch (plus Tweets) 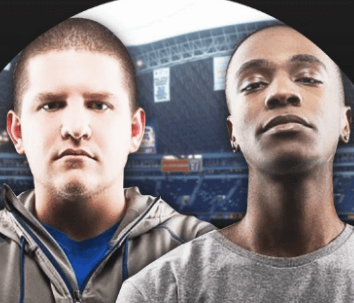 Since the horrific killings of Eli Clayton (21) and Taylor Robertson (27) (pictured left) at a gamer tournament in Florida, the media is full of stories about the problem with video games. We’re being led to believe that it’s gamer culture that’s the issue here. That, apparently, is what led to 24-year-old David Katz opening fire on fellow gamers, killing two and wounding eleven others. I think that’s just the NRA getting the focus off the real problem: the guns themselves.

I just don’t buy that video games are what made Katz a killer. If anything, I think they’re an outlet for (especially, but not exclusively) young men. The rise of video games correlates with a fall in youth violence, and it’s possible there’s a connection.

The stories all start with how big the gaming community is. A billion people watch top tournaments. That’s multiple times any Superbowl. I don’t see anyone blaming football or any other sport for violence away from the game. But suddenly we get one death, and all of a sudden the focus is on how terrible video games are.

But interviews with other leading gamers, as well as other comments tell a different story in my judgement. Commentators are quick to point to the loneliness of gaming. But the gamers in TV interviews said there was great camaraderie between the players. Katz always kept himself separate from the others and wasn’t part of the normal culture. 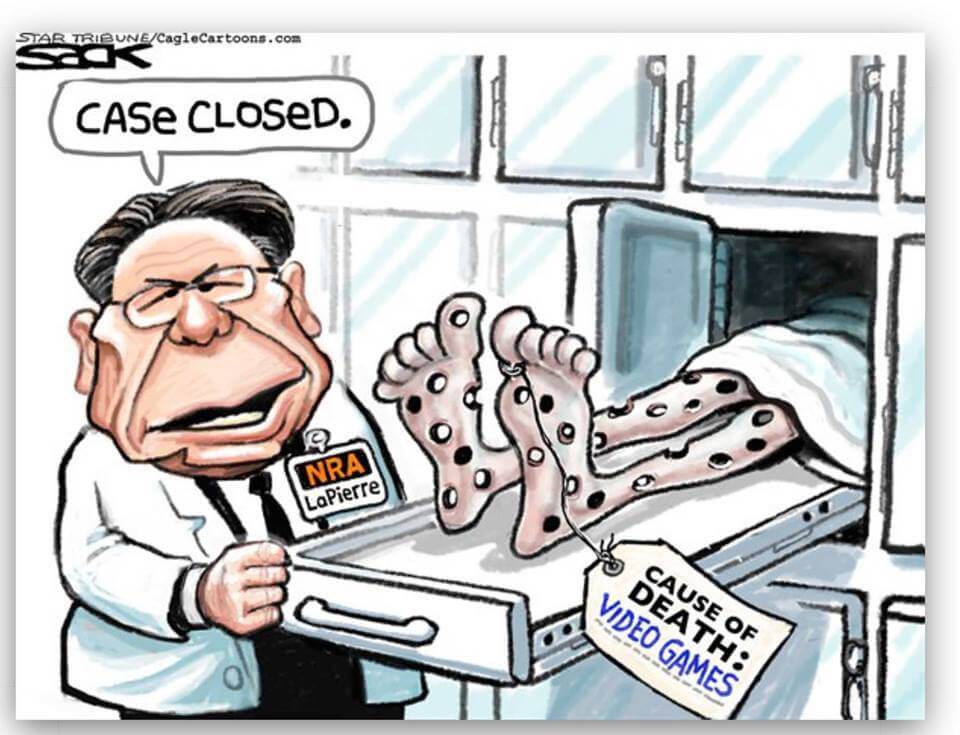 What seems clear is that Katz has a history of mental health issues. Of course, most people with mental health issues are a bigger danger to themselves than anyone else, so we must be careful here. He has been an inpatient, and there are unconfirmed suggestions of self-harm. If that is the case, he should not have been able to buy a weapon. However, this is the USA, and so this young man bought a gun with ease. Apparently it’s the responsibility of the buyer to voluntarily tell the seller if they have mental health issues that mean they shouldn’t own a gun!

Most gun deaths in the US are the result of suicide. Mental Health professionals tell us that if people try to kill themselves and fail, or cannot find an easy way to die, most often they can be brought back from that dark place. But if they have a gun, there’s a pretty good chance they will be successful. Thousands of people die in the US each year that might live, just because they have easy access to a gun.

What Causes Mass Shootings (According to the NRA)

Whenever there’s a well-publicized shooting in the US, those who support the idea that everyone has the right to own any sort of gun begin the Blame Game. Leading the Blame Game is the NRA, who feed the Blame Game machine. 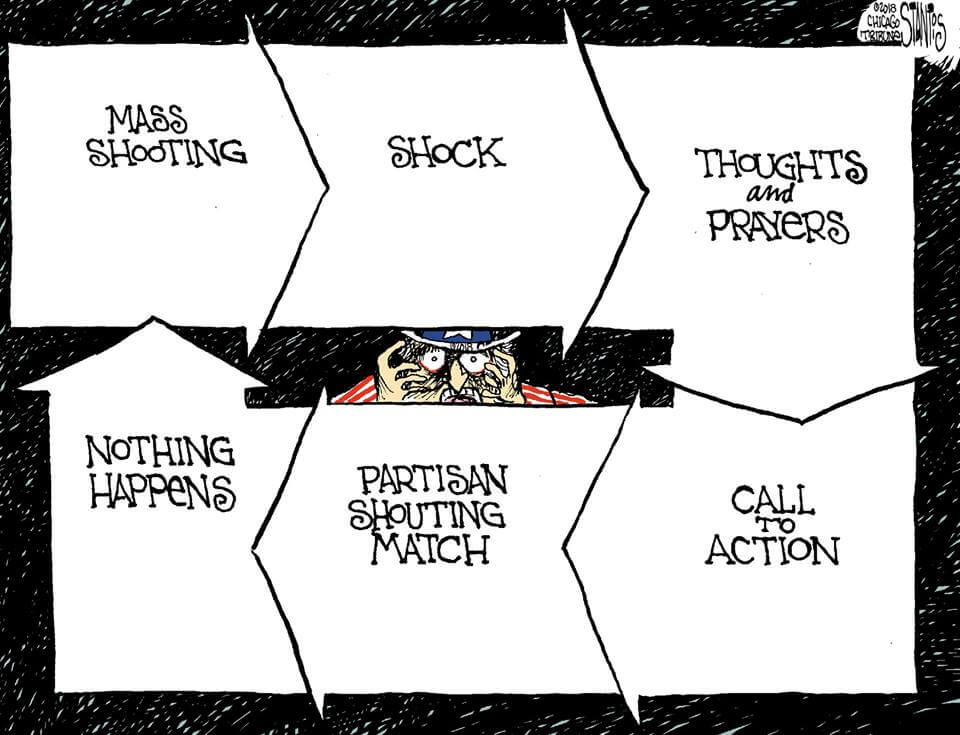 What causes mass shootings? The NRA has the answer ready when people inevitably ask that question. The reasons they provide are:

The problem with these reasons is that they exist in every other culture in the developed world. Many of us have a very similar culture to the US, but we don’t have the same issues with mass shootings. In fact, the rest of us don’t have the same issue with shootings of any kind. The only real difference between the US and the rest of us is the availability of guns. And sometimes, even that isn’t the problem. Canada has just as many guns as the US. However, they don’t use them to shoot themselves or each other at the same rate as their neighbours south of the border.

Why Doesn’t Congress Change the Law?

I have literally hundreds of cartoons and memes in relation to guns and the USA. The standard line of those that support the idea of everyone being able to have a gun is, “Only a good guy with a gun can stop a bad guy with a gun.” Therefore, of all of them, I think this one is the best:

The whole situation around guns in the USA is one that baffles me. There are surveys that show more people think there should be universal background checks than like kittens (!!!), and still Congress fails to act. There’s a good reason for that of course: money from gun manufacturers channeled through the NRA. That money is then spent both on huge donations to political campaigns and advertising against candidates who don’t toe the NRA line.

There’s a lot more I could write about this. However, I’ve written a lot about it in the past, and I will again in the future. This time, I’m just going to let a few of the cartoons and other pics from my collection do the speaking. 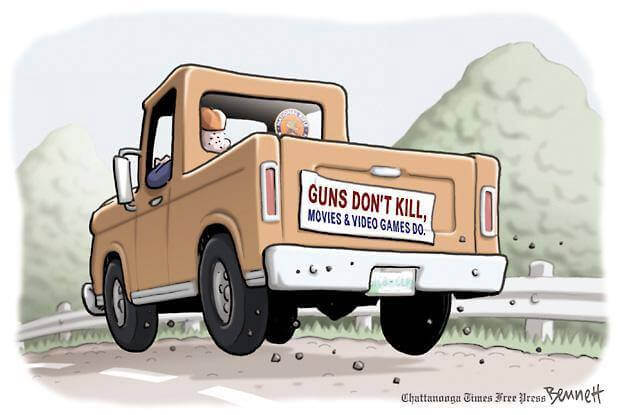 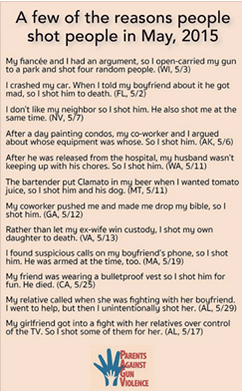 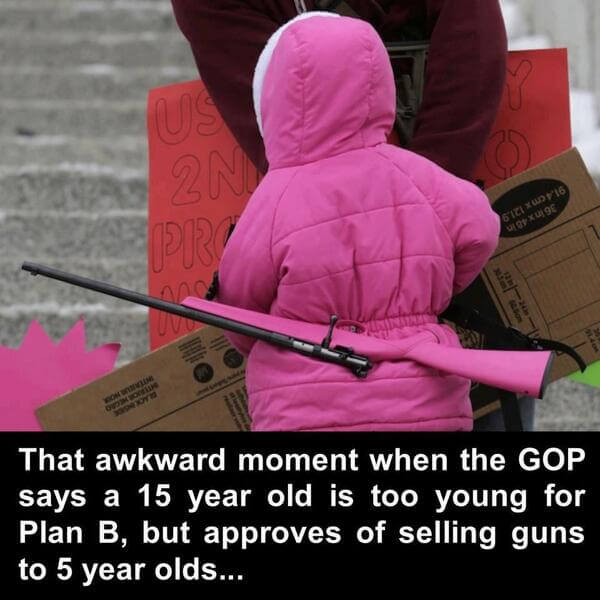 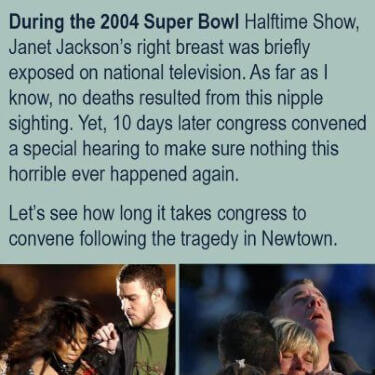 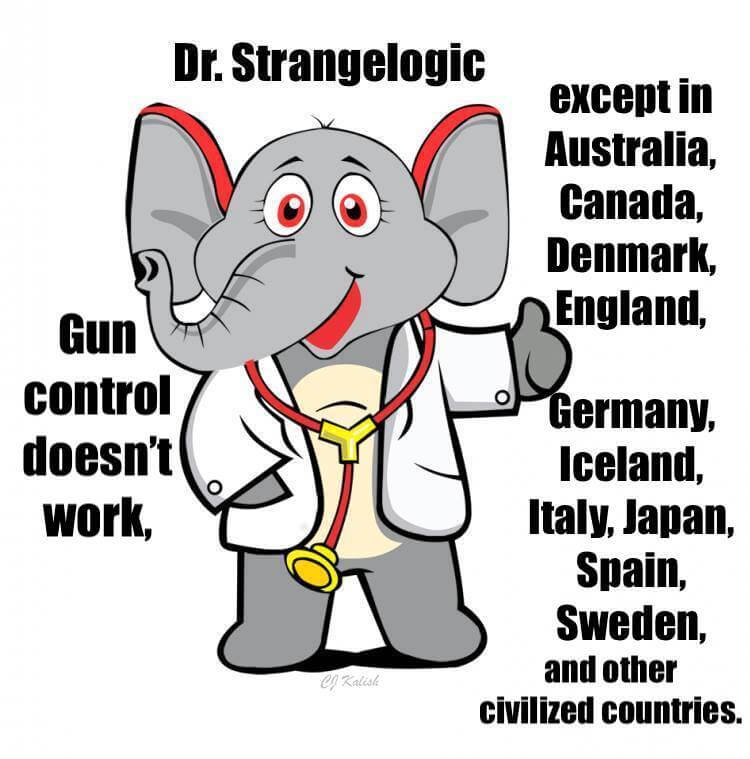 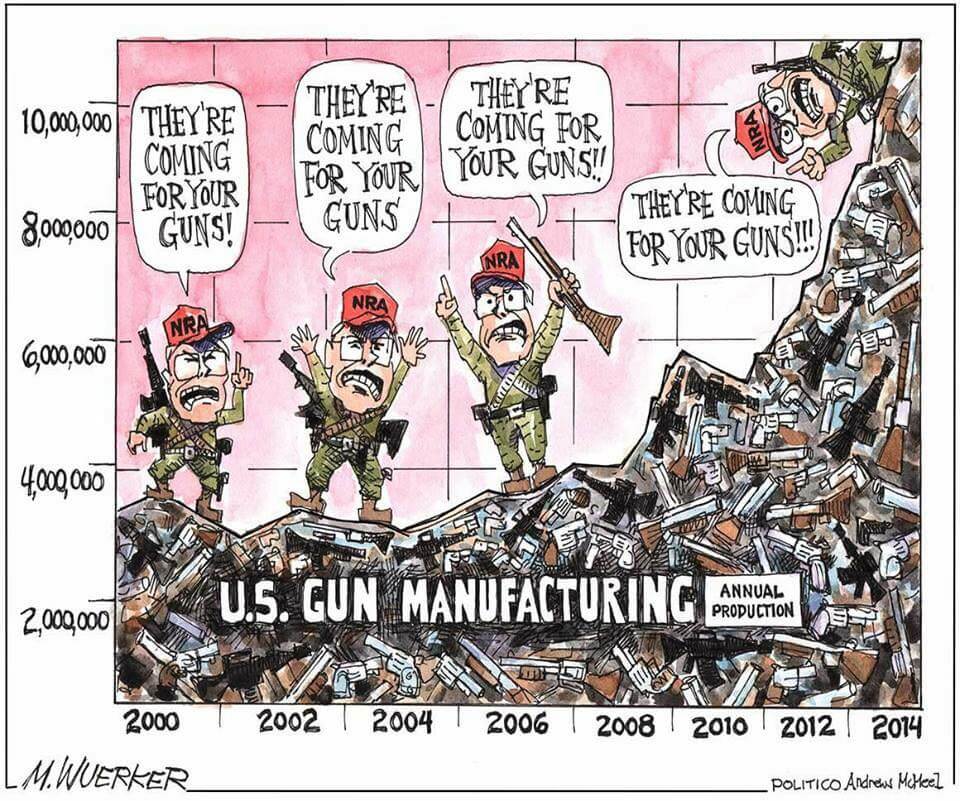 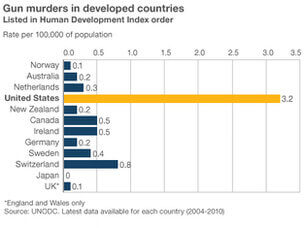 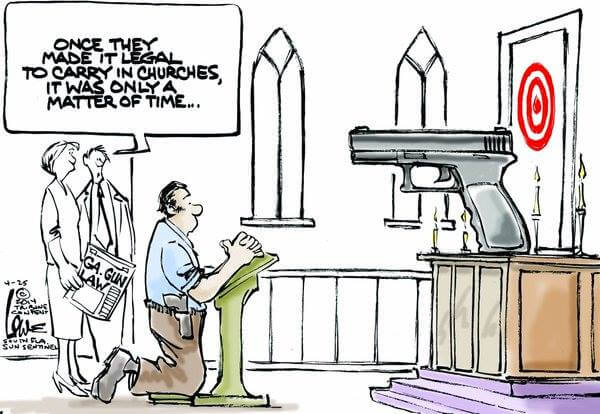 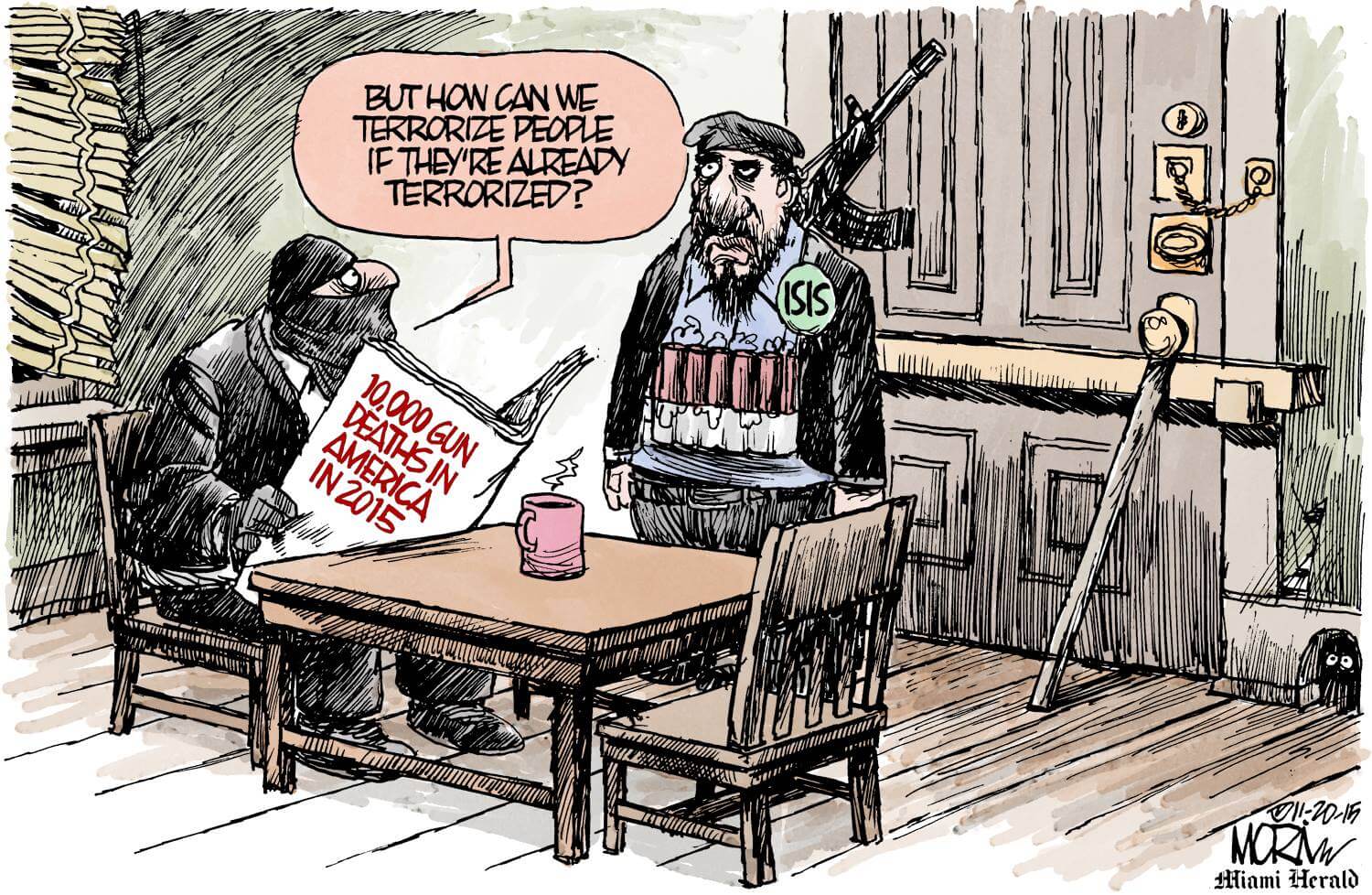 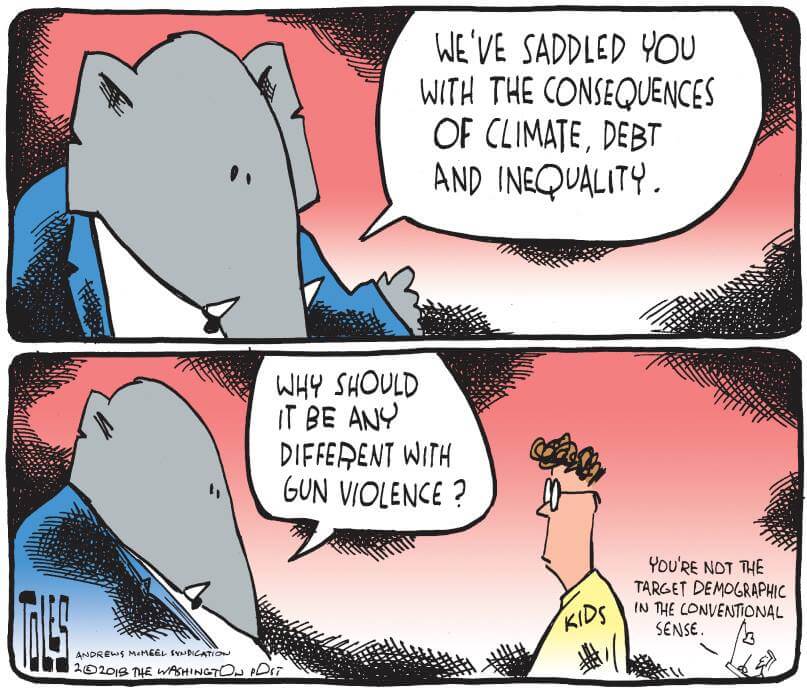 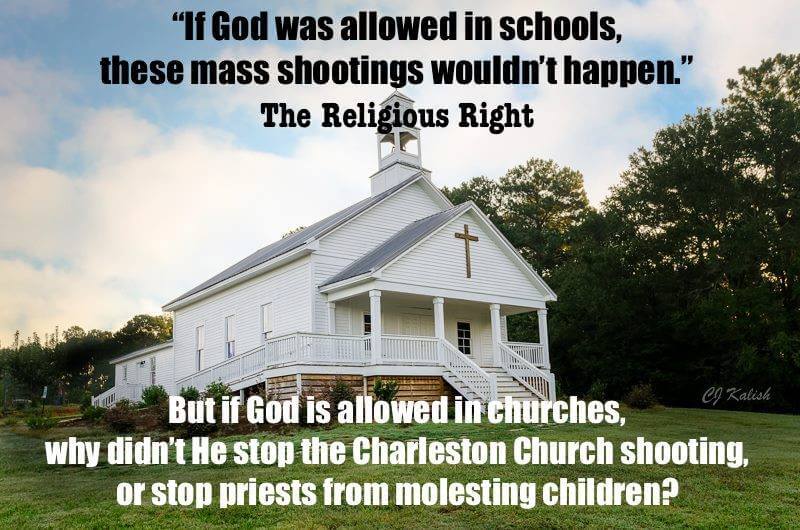 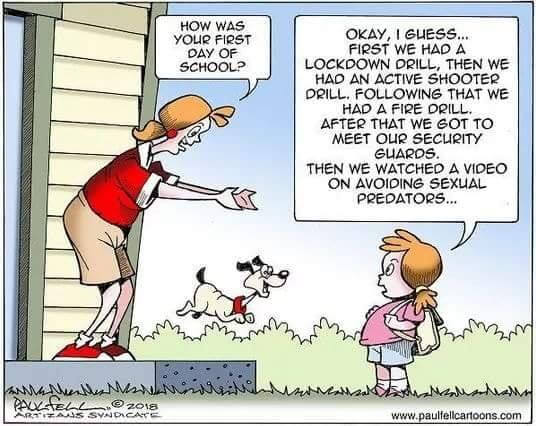 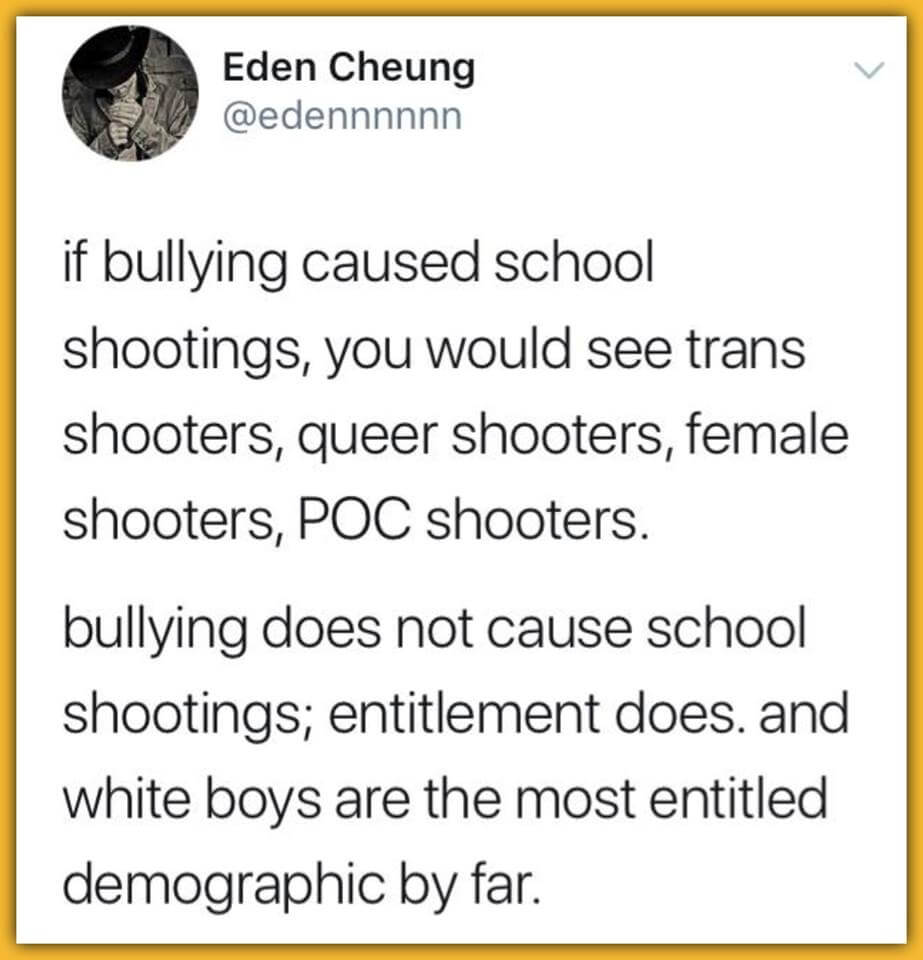 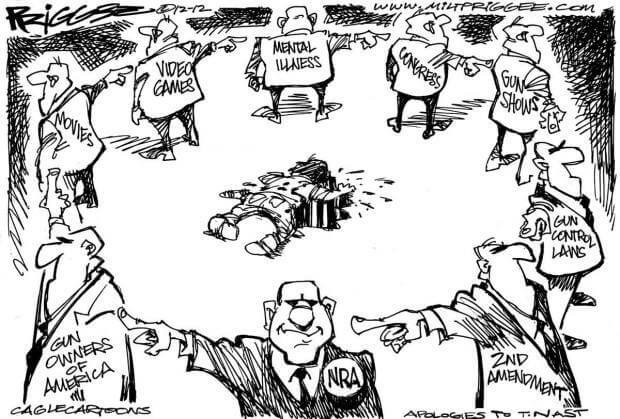 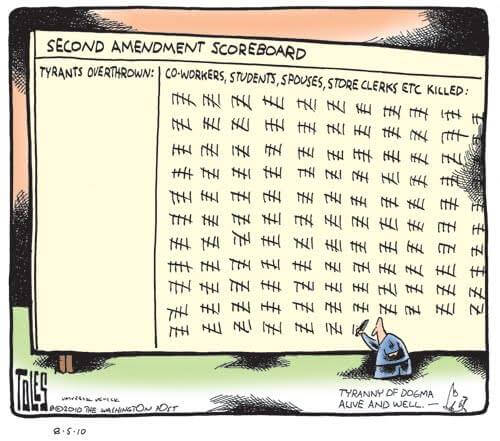 President Trump’s claims that there’s a Google conspiracy against him and all bad news about him is fake news gave fodder for this excellent cartoon …
(Via Ann German.)

An excellent message!!!
(Via Ann German.)

I have buried my privileged head in the sand for many years.I am very sorry.I struggle daily,I am learning.I will be part of the solution. pic.twitter.com/IdFBjITZuv

It’s getting worse, and it’s about time. Trump’s Teflon coating cannot last forever. There will always be a few conspiracy theorists that think he’s great, but that number will deflate quickly once the reality of his character is exposed. Many of his fans already know what he’s like and only approve of him because he’s doing what they want like putting an ultra-conservative justice on the Supreme Court. They’ll judge him wanting like only a Good Christian can when the time comes.
(Via Ann German.)

60% disapprove of Pres. Trump, numerically the highest of his presidency; 53% disapprove strongly, the first time more than half have said so in an @ABC News/WaPo poll. https://t.co/bfyhG9jcx6

It looks like the “monkey” comment of Ron DeSantis is the racist comment many of us took it for, and not the accident his supporters claimed. (Of course, Laura Ingraham thinks DeSantis should get an apology!) His Democratic opponent, Andrew Gillum, looks to be an outstanding candidate, so I hope he gets the win he deserves.
(Via Ann German.)

1. Whether this is survivable in 2018 will be telling.
2. Do you really serve as an admin on this group and think it WON’T be found out?https://t.co/p0L7ga0EJm

These were in a video from Reich I posted on Facebook a while ago.They’re worth repeating.

This is excellent news following excellent work by the New York Attorney General.
(Via Ann German.)

Here’s what an AG’s office can do:

The Trump admin has now ordered $574M restored—or more than $750M on an annualized basis.

The U.S. economy is growing, but workers are seeing less and less of the benefits https://t.co/bcEmrqd0ki pic.twitter.com/OhvCGz5412

I’ve succumbed. I swore to myself that I’d never put up a video of kids doing funny stuff for multiple reasons I won’t bore you with. But Ann German sent me this one, and it’s too cool not to use.

Ever wonder what 2-year-old twins might do in the middle of the night?

You may have heard about the red tides in southern Florida recently, causing algal blooms, shellfish poisoning, and mass fish deaths. The reason for much of this is the appalling environmental policies (or lack thereof) backed by Republican politicians. Most recently, the worst offender has been Rick Scott, who comes up for reelection this year. The video at the link is 9:23, and is worth watching if you have the time.
(Via Ann German.)

Here is an exceptional video that explains the many various impacts on our waters and the perspective from those who live alongside these waterways. Please try to watch when you have time. https://t.co/iKksYEFBzc

In 1985, the city of Potosi in Venezuela was deliberately flooded by the damming of a nearby river to create hydroelectric power. But in 2008, as the waters receded, the city’s old church began to emerge from the depths, a stark reminder of what was buried below the surface. pic.twitter.com/9Awp5zeEwt

Question: What do Myanmar (Burma), Liberia, and the USA have in common?

Answer: They’re the only countries in the world that haven’t updated to the metric system!

This was one of the responses. Un-fucking-believable. SMH.

This is cool. (“My” cat reacted to the noises the chimps were making. She doesn’t react to human voices from the computer or television, but she does respond to babies and any animal noises.)

A crab doing its sideways-shuffle thing.

18 Photos Prove Capybara Can Befriend Every Other Species https://t.co/GnevPEJ8la

Way to blend in!
(Via Ann German.)

“if anyone asks, I was here the whole time” pic.twitter.com/OscC8MmdNe

Leonardo da Vinci: “Even the tiniest kitten is a masterpiece … ”

I’m not even going to ask what’s going on here!

But it’s not the only one!

And how’s this for a cool cat?!

Knock-out in the first round …