The New Zealand Response to the Orlando Mass Shooting 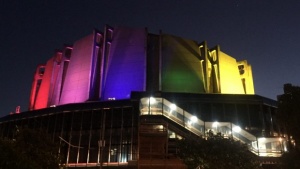 Wellington’s Michael Fowler Centre lit up in the colours of the rainbow. (Source: stuff.co.nz and Paul Harper/Fairfax NZ)

New Zealand’s prime minister John Key phoned his golfing buddy President Obama to offer our country’s condolences following the murders in Orlando, which were apparently warmly received. This afternoon, in their first day back since the tragedy, spokespeople from all seven political parties in New Zealand’s parliament spoke about the tragedy on the official record.

Most spoke well, expressing their condolences and support for the victims and their families and friends. Hague is gay (like about 5% of our MPs) and as he choked back tears he also reached out to the Muslim community. Winston Peters, however, used the opportunity to rail against gun control and refugees and was basically a complete a-hole. He was followed by Te Ururoa Flavell who thankfully, and typically for him, brought the mood back to one of respect and compassion. Dunne, clearly adjusting the text of his prepared speech, made comments about the inappropriateness of taking advantage of the situation to advance a political agenda. This obvious dig at Peters was met with the clear approval of his fellow parliamentarians. Despite the fact that our parliament is still opened with a prayer, I was thrilled that none of the speakers invoked God or reverted to the ubiquitous “our thoughts and prayers are with them.”

During Question Time, which followed the above, Winston Peters carried on his programme targeting Muslim immigrants and refugees, suggesting that anyone who was Muslim could never meet the requirements to be a proper member of New Zealand society. All his claims and accusations were shot down by the prime minister who, for a change, was supported by most of the rest of parliament. 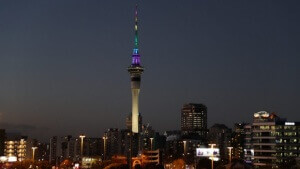 In Auckland, the Sky Tower was lit in rainbow colours in memory of those killed in the Orlando shooting. (Source: stuff.co.nz and Chris McKeen/Fairfax NZ)

There have been vigils and other gatherings all over New Zealand in support of the victims of the Orlando shooter and their friends and families. Rainbow flags were at half staff in Auckland’s Aotea Square. Political and civic leaders attended many of the commemorations. The New Zealand Human Rights Commission condemned the killings, as did the leader of the Federation of Islamic Associations of New Zealand. Their president, Hazim Arafeh, said to stuff.co.nz:

We are outraged and shocked at this despicable crime and our thoughts are with the victims of this cowardly attack. We stand alongside all victims and we stand against this appalling violence which must never have any place in our civilised, democratic societies.

The mood at all the gatherings was one of sadness and support. One person told stuff.co.nz that she’d met her last partner in a gay bar and they’d had a wonderful year together. She expressed her sorrow that the gunman’s life was “… so short and filled with ignorance and hate.”