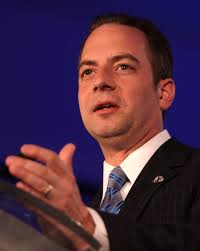 On Tuesday the US Republican party had several big wins in their country’s mid-term elections. As a result, they took control of the Senate and increased their majority in Congress. Thus the only branch of government in Democratic hands is the presidency. (Mostly, legislation requires approval by all three branches to become law.)

In speaking about their victory though, Republicans have been making multiple claims about the mandate this gives them that just aren’t backed up by the facts. Whoever wins in an election, outrageous claims are to be expected in the euphoria that follows. However, one expects that a party’s official representatives would be a little more measured. This has not been the case with Reince Preibus, Republican National Committee chairman. His characterization of the reasons for the GOP’s win show his analytical abilities are sorely lacking.

In at least two interviews he claimed that the election result was anti-Obama and pro-conservative principles. The following interview was with Robert Siegel on NPR:

Siegel: I’d like to ask you broadly, what happened yesterday? If you can sum up for us what it was that led Republicans to victory, winning the Senate, winning more seats in the house, winning so many governorships, … was it all about Barack Obama?
Preibus: I think it was a couple of things. One, people rejected Barack Obama’s policies and all of the people that were connected to those policies, so that’s the first piece. The second piece though was that conservative principles in the states were all accepted, and everyone connected to Obama was rejected.
Siegel: So you would say there’s a real political/ philosophical statement being made?
Preibus: I think that’s a massive statement that was made by the electorate last night. It wasn’t just the rejection of Obama, it was the acceptance of conservative principles in governance.

Then he said the following on Fox News in an interview with Bill Hemmer:

Preibus: …But the interesting thing here Bill is that if you kinda peel back the onion a little bit, the Republicans in the states, Walker [Governor, Wisconsin], Snyder [Governor, Michigan], Rauner [Governor Illinois], all across America, they were accepted, their policies were embraced by the same voters that rejected where the Democrats were. So it wasn’t just a rejection of Obama, it was an acceptance of conservative principles across the country.

So why does this lead me to reflect on the ability of Preibus to analyze the election result? First of all, he states that the election was a rejection of Obama’s policies. Actually, it was a rejection of Obama himself. As I will show below, a majority actually like his policies, but, as always in the sixth year of a presidential term, the populace is just getting sick of the president. Secondly, he states that it’s an acceptance of conservative principles. This is even more wrong. The statistics show that conservative principles are largely being rejected. Even in this election, which was dominated by voters who are favourable to Republicans, liberal policies (minimum wage) were supported and conservative ones (personhood amendment) were defeated.

The minimum wage was on the ballot in five states, all of which are traditional red states, and all of which voted for the rate to be raised. Alaska, Arkansas, Illinois, Nebraska and South Dakota all gave a majority of their votes to Republican candidates and all also voted to increase the minimum wage in their states. That means there are now thirty states that have voted for minimum wage increases, which is contrary to conservative policies.

There was a personhood amendment on the ballot in Colorado. It was the third time the red state had tried to get such an amendment passed, and the third time it was soundly defeated, despite a strong win for the Republican candidate. Incumbent senator Mark Udall (D) was mocked for his focus on women’s rights, even earning the name “Mark Uterus” in some quarters. However, despite his defeat by Cory Gardner (R), the personhood amendment was strongly defeated and Gardner had to back away from his previous support of the amendment.

Further, the success of the Republicans had a great deal to do with the composition of the electorate. Pew Research reports:

And even though Democratic candidates won the 18- to 29- year-old vote by an 11-point margin, 54% to 43%, this group didn’t carry the same weight as it did two years ago when Barack Obama was re-elected. They made up a much smaller share of the electorate than in 2012, and the Democratic margins among this group also were not as large as in 2012.

According to the exit polls, voters younger than 30 were just 13% of those who showed up at the polls. Though this is little different than the 12% they represented in 2010, younger voters accounted for a larger share (19%) of the 2012 electorate.

The graphic representation of the importance of men and older voters: 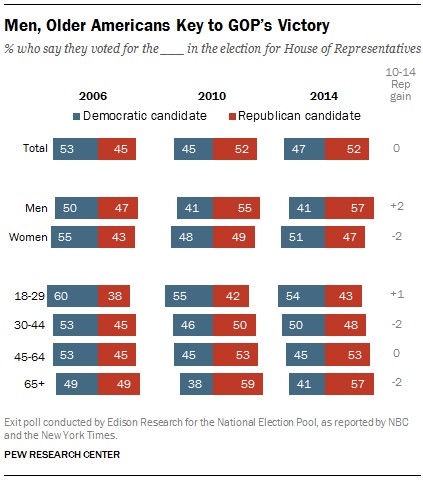 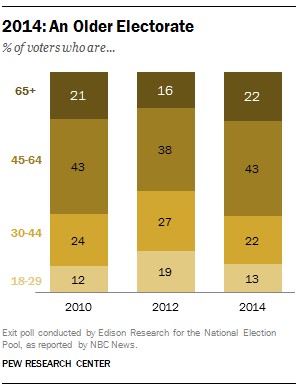 That older voters are key is further demonstrated by the graphic to the right. The make-up of the those who voted closely matched that of the 2010 election, when the Republicans also did well. It does not match the 2012 election (or the 2008) election, where the turnout was higher and more closely resembled the population as a whole. It is difficult, in my opinion, to claim a mandate when the survey (which is what an election is) is not not representative.

Another area that shows Americans do not support Preibus’s “conservative principles” is marijuana legalization. Three more states, Alaska, Oregon and Washington DC have voted to legalize marijuana. Gallup’s national poll shows that the nationwide trend is towards legalization of marijuana. Libertarian Republicans are in support of this, but those with the “conservative principles” of Preibus do not. 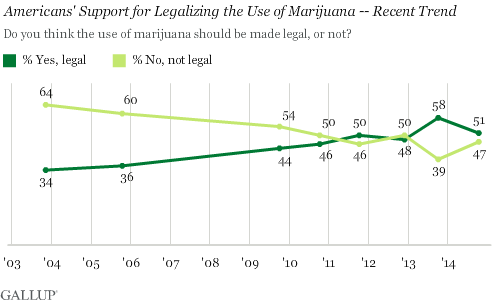 Preibus further claims that part of the Republican success at this election is the efforts he is making to improve the party’s ground game. It is hard to know if this is true or not. This election, as always with US mid-term elections, had an extremely low turn-out and was dominated by older, white, male voters. These are the people who normally vote Republican anyway. If Preibus had done any analysis of the election result he would know that this result does not represent a swing towards the Republican party and especially not towards conservative principles. Unless he gets honest about that, at least with himself, it is inevitable the Republicans will lose big in 2016.