Donald Trump has been way ahead in the polls in South Carolina for some time, and in reality the battle there is for second place between Ted Cruz and Marco Rubio. That place belonged firmly to Cruz earlier this week, but exit polls from before the polls closed showed that 30% of late deciders were choosing Rubio, so he may have gained some momentum in the last few days. Another exit poll question asked voters what candidate they thought ran the “Most Unfair” campaign. That was won by Trump (41%) with Cruz the runner-up (33%). The next highest result was only 7%, scored by both Bush and Rubio. I would imagine that the battle between Trump and Cruz since the CNN/GOP Town Halls has many voters looking for someone they feel can both win and unite the party.

Interviewer: When President Trump is in office, can we look for more forward motion on equality for gays and lesbians?

Trump: Well, you can. And look – that’s your thing, and other people have their thing. We have to bring all people together.

Super-pac Voice 1: It’s about transgender bathrooms in your child’s school. It’s about tearing down our Judeo-Christian values.

Super-pac Voice 2: It’s about tearing down our America. Ted Cruz for president – now, before it’s too late.

Starting yesterday, the same super-pac also put out a robocall saying among other things:

Trump talks about our [confederate] flag like it’s a social disease.

This is, of course, a racist dog whistle. Cruz says he opposed the “tone” of the second robocall. (As far as I’m concerned, these calls are yet another reason Cruz needs to be kept out of the White House.)

Trump’s response to these robocalls on Fox and Friends Weekend:

You could call him a serial liar. And I personally – and I’ve been in business with the best of them – I have never met anybody that lied as much as Ted Cruz.

I have to go along with Trump here. I’ve just seen Cruz interviewed by Bret Baier on Fox New’s Special Report; Cruz said Trump said he would put his sister in the Supreme Court because she is a strong supporter of partial birth abortion. Trump has specifically said he wouldn’t put his sister on the Supreme Court, whether she was qualified or not for reasons of nepotism, and that he has no idea what her views on abortion are. I was disappointed Baier didn’t challenge Cruz on his statement; he is one of the few Fox News hosts that is usually better than this. 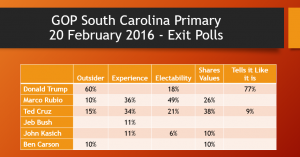 Jeb Bush, his super-pacs and other supporters spent US$15 million in South Carolina, he brought out his brother and mother to stump for him, and the Bush family is popular in the state. Despite that, he isn’t showing up as popular is any of these categories. Trump spent only US$1.5 million – a tenth of what Bush did. Most candidates would probably drop out at this point, and that’s what Bush has done, tearing up as he did so. That leaves only one remaining Republican candidate – John Kasich – who is actually capable of being president.

I expect Carson will drop out too, and if he doesn’t he should.

Pundits called the South Carolina Race for Trump even earlier than they called Nevada for Clinton in terms. With 88% of the vote counted the results were: 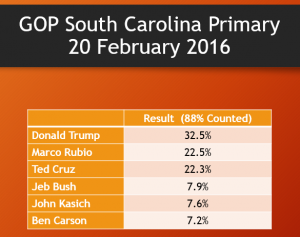 At this point, Rubio is slightly ahead of Cruz, but that may not last.

One of the most interesting things about the result is that Trump and Cruz are splitting both the evangelical vote and the military vote. It seems to me that those who support Trump see whatever they want to see in their candidate. In that way he’s a bit like a religious figure where a god is a very different thing to different people, depending on their own wants and needs.

It will interesting to see where the Bush (and Carson) votes go in the next few polls. I presume the Bush votes will mostly go to Kasich, but the Carson ones could go anywhere.