This wasn’t my original choice for Sinner of the Week, but when I saw this particular item on One News last night, I couldn’t help laughing.

The TV screen showed fifteen ambulances and a helicopter lined up outside a conference, preparing to take the participants to hospital after they suffered from apparent amphetamine poisoning. Yes, I know I should have been feeling sorry for them, but it was a homeopathy conference. They had, they said, no idea how it happened.

Which I don’t doubt for a minute.

I mean, do you really expect any of them to have any genuine medical knowledge? If they have, it’s likely been suppressed by their belief in homeopathy.

The conference was is Handeloh, a small town in northern Germany. The Associated Press reports:

Authorities say emergency workers called to a conference centre in northern Germany found some 30 people staggering and suffering from cramps, apparently as a result of amphetamine poisoning. …

Fire service spokesman Matthias Koehlbrandt told broadcaster NDR the group was aged between 25 and 55. NDR reported they were alternative and homeopathic practitioners, and that they were taken to the hospital.

Authorities said their preliminary finding was that the group was poisoned with amphetamines, but Koehlbrandt said they didn’t knowingly take the substance.

Homeopathy works on the principle of “like cures like.” Normally I’d go to Wikipedia for a definition, but they call it a complementary “medicine,” and there’s nothing medicinal about it, so I’ll give it a go myself.

The idea is that a substance that would normally be harmful to you will cure you if taken in minute quantities. Even if this was true, the likelihood that there is even a molecule of the supposedly curative substance in any homeopathic remedy you buy is practically non-existent. The “medicines” are diluted to such an extent, there’s likely none of the supposed curative substance left in the tiny bottle of water sold over the counter. Homeopaths get around this by saying water has a “memory” of what it touched, and that is enough to effect a cure.

You just have to believe.

Because that’s what homeopathy is – it’s a belief system, no different from religion. Holy water and homeopathic medicines are exactly similar, something Pliny the Inbetween took advantage of on the Evolving Perspectives website. 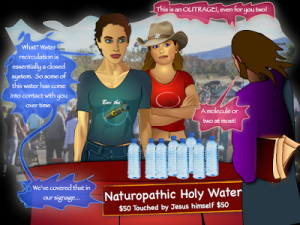 A Twofer – by Evolving Perspectives

We don’t know what happened yet. I can’t help wondering if these homeopaths were deliberately poisoned by the family member of someone who suffered because of their reliance on homeopathy. And if that’s the case, I’ll condemn the poisoner. Taking the law into your own hands is not the way to go here – getting the law changed so these charlatans can’t rip people off is. Also, we must improve science education so people have the knowledge to make better judgments about things like homeopathy. 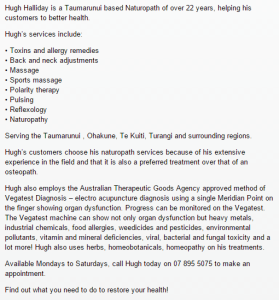 Everything you need to know to avoid Hugh Halliday.

Even in little (and I mean tiny) old Taumarunui we have a homeopath, whose business has been trucking along nicely for years. An elderly (90s) woman I know went to see him recently, hoping he could cure a skin condition that dermatologists couldn’t. He waved a series of crystals over her inner wrist. The first couple failed to register anything, but the third showed a result! Success! She had, he said, too much mercury in her system, and she needed to de-tox. He puzzled over what might have caused this system overload.

“Have you had any fillings recently?” he asked, apparently unaware that it’s many years since fillings in New Zealand had mercury in them.

“No,” she replied in confusion, desperate to help him in his diagnosis.

He pondered for a while, then hit on the solution.

“Do you have ‘flu’ vaccinations?”

“That’s the problem. Vaccines have mercury in them, and that mercury has built up in your system. Don’t have a jab this year, and we’ll work on clearing the mercury from your body.”

(No, ‘flu’ vaccines don’t contain mercury. And if she was suffering from mercury poisoning, I really think the many properly qualified doctors she sees regularly would have picked it up.)

So she didn’t have a ‘flu’ vaccination this year. That was a few months ago at the beginning of winter. Luckily for her she didn’t get the ‘flu’ – there were two major strains in New Zealand this winter, and the one prevalent in the North Island was a killer. Both were covered in the vaccine.

Perhaps if their mother and grandmother had died of the ‘flu’, her family might have felt like poisoning the person at least partly to blame with amphetamines. There would likely be no legal case against him, and people are responsible for their own health decisions, but they’re also vulnerable when they’re ill.

And it doesn’t help that we live in a society where faith without proof is a quality lauded by most.

Pharmacies/chemists should not be allowed to sell homeopathic remedies. It gives them a kudos they don’t deserve. If they’re going to be sold in such places, they should be properly labelled as placebos that have no proven therapeutic value.