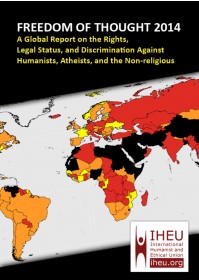 It was my birthday on 10 December. I love the fact that my birthday is also International Human Rights Day. In New Zealand, it’s also the anniversary of the day smoking was banned in indoor public spaces, which makes bars, restaurants and workplaces much nicer places to be. 10 December is also the day the International Humanist and Ethical Union (IHEU) releases their Freedom of Thought report. (Full title – Freedom of Thought 2014: A Global Report on the Rights, Legal Status and Discrimination Against Humanists, Atheists and the Non-Religious.) It’s a good and comprehensive report, but its focus is such that New Zealand is classified in the “Severe Discrimination” category while the United States comes up smelling of roses. I find this bizarre.

(Indi at Canadian Atheist has written a good summary of the report as it relates to Canada.)

Within minutes of reading the IHEU report, I came across yet another anti-atheist piece in the American media by an ignoramus called David Marcus entitled Seven Things Atheists Get Wrong. With the backdrop of a huge picture of a grinning Pope Francis, Marcus makes an ill-informed assault on atheists.

The first thing he wishes atheists knew is, “Religion Is About Morality, Not Creation Myths”. He attacks what he sees as atheists’ obsession with children being taught creationism and intelligent design over Evolutionary Theory. To Marcus, that isn’t important because religion is all about morality. Marcus is clearly of the opinion that morality is the preserve of the religious, and atheism is by definition immoral.

Atheists Are Moral People. Not only are we moral people, our morals are, on average, better than theists. After summarizing twelve studies on the morals of atheists Zuckerman wrote in his 2009 report ‘Atheism, Secularity, and Well-Being: How the Findings of Social Science Counter Negative Stereotypes and Assumptions‘:

It is often assumed that someone who doesn’t believe in God doesn’t believe in anything, or that a person who has no religion must have no values. These assumptions are simply untrue. People can reject religion and still maintain strong beliefs. Being godless does not mean being without values. Numerous studies reveal that atheists and secular people most certainly maintain strong values, beliefs, and opinions. But more significantly, when we actually compare the values and beliefs of atheists and secular people to those of religious people, the former are markedly less nationalistic, less prejudiced, less anti-Semitic, less racist, less dogmatic, less ethnocentric, less close-minded, and less authoritarian.

Teaching children accurate science is important too. Creationism and Intelligent Design are not science and their theories are simply wrong. Anyone who says otherwise is mistaken or lying. They have no place in any reputable educational institution, and to teach them to children as anything other than a religious myth is dishonest.

Marcus also mocks some of the aids we atheists use on the internet to mock creationists like the “… jokes about cave men riding dinosaurs … ‘, but you have to admit, some of them are very funny: 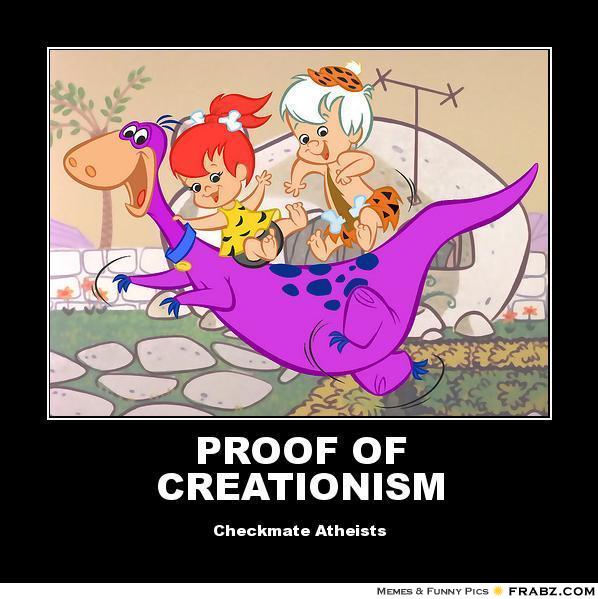 The next thing Marcus wishes atheists knew is, “Religion is the Foundation of all Morality, Not Merely an Expression of it”. He goes on to say:

All of us, whether atheist, agnostic, or a member of a religion, practice morality based on religion. Without religion there would never have been morality. There was no peaceful, Adamite paradise of moral choice which religion sullied millennia ago. Before religion, there was murder and rape and all manner of horrors just as there are today. It was religion that first sought to constrain human actions through a moral code, not science.

I don’t even know where to start with this statement, it’s so stupid. He really seems to believe that before religion came along there was anarchy – that people hadn’t worked out theft was wrong before Moses came down from communing with God in the mountains. 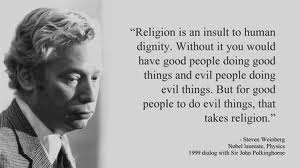 This attitude is one that scares atheists – the idea that a god and religion are required for people to be moral. It means that the only reason religions people are moral is the promise of heaven or the fear of hell. That means they’re not moral people at all, they’re selfish and fearful people. Atheists are good without god. We take responsibility for our own behaviour, we don’t blame evil spirits when we get it wrong, and we don’t consider anonymously confessing to a supernatural being sufficient for forgiveness.

The third of Marcus’s wishes is that atheists knew, “Religion was the Foundation of Society, Not an Addition to it”. He refers to what he calls Marcel Gauchet’s “insightful” essay that argued “without religion there would be no state”.

I’m not a philosopher, a sociologist, or an anthropologist, and perhaps one can weigh in here, but to me this doesn’t make sense. The development of a state is surely a normal stage in our evolution and could easily happen without religion. It would need codified laws of behaviour, but religion is not required to develop these.

Marcus’s next anti-atheist attack has me a bit mystified. I’m not entirely sure what he’s talking about here:

4. Atheists Do Believe
The question most often posed to atheists who complain about the presence of the Ten Commandments or a creche in public spaces is, “Since you don’t believe, why does it bother you so much?” This is the wrong question. The right question is, “Since you do believe, why does it bother you so much?” Because most atheists do believe, and I stress the word believe, that they are capable of understanding right from wrong. They provide no scientific justification for such a belief because no such scientific justification exists. 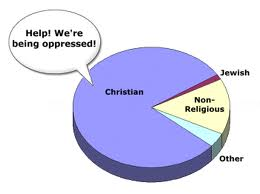 I just don’t know what’s he’s talking about. What is our belief? Atheism is simply the lack of belief in any god or gods, so he can’t be talking about that. And the Ten Commandments. What’s that about? In the United States, the First Amendment means that the Ten Commandments shouldn’t be displayed in a public space. Because of the dominance of Christianity they have been displayed in many places, but that doesn’t change the fact that it’s illegal. To attack those who point it out is irrational. Some Christians do seem to think there’s a War on Christianity, but that too is irrational.

Number five on Marcus’s list of things he thinks atheists should know is “Science Can’t Teach Us Right From Wrong”. 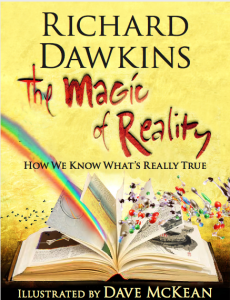 Well, I hate to disappoint you Mr Marcus, but atheists already know that, and you’d be hard-pressed to find an atheist who claims such a thing. What science can teach is what is real and what is not, what is true and what is not. I recommend Richard Dawkins book ‘The Magic of Reality: How We Know What’s Really True’ to you.

Number six is “Religion Complements Science, It Doesn’t Oppose it”. He makes the statement:

This is where religion, far from being the natural enemy of science, comes to its aid. Just as believers must always fight nagging doubts about the truth of their beliefs, the atheist must fight nagging beliefs when confronted with moral choices. Just as there is no paradox in a believer knowing that science can reveal important details of how the physical world operates, there is no paradox in an atheist knowing that religion and its ancient history of moral investigation is relevant to moral understanding.

If science complements religion, why has religion spent so much of its history suppressing it? The answer is obvious of course: science often proves claims made by religion are wrong and rather than admit they were wrong, they attack science. It took the Roman Catholic Church hundreds of years to “forgive” Galileo for speaking the truth. At least Galileo was allowed to live – others were burnt to death for the same “crime”. There are countless examples of science and scientists being attacked for exposing lies in religion. In the United States literally billions of dollars are spent in an attempt to force the lies of Creationism and Intelligent Design on children.

Marcus finishes with, “Ignorance of Religion is Ignorance of History, For Atheists and Everyone”. 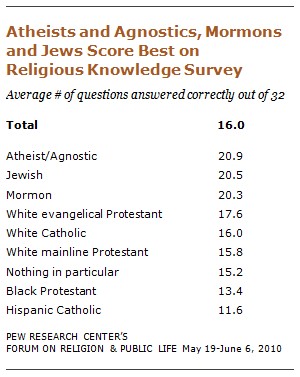 Again, I think you’d struggle to find an atheist who disagrees with that. And unlike your average theist, we atheists walk the talk. A Pew Research Center poll from 2010 shows that atheists and agnostics have a better knowledge of religion than any religious group. If you go to the website you can actually answer a selection of the questions used in the survey. I got them all correct, and I suspect any of the so-called New Atheists that the media so loves to hate, would too.

This constant bigotry against atheists in America is frankly appalling. In my piece, “America Hates its Best Citizens: the Atheists,” I presented the Pew Research Center statistic that demonstrates atheists are among the most hated Americans. There are further statistics that show America’s anti-atheist bias. For example, in 2011 the Public Religion Research Institute conducted a survey that questioned people about US presidential beliefs. The results showed that two-thirds of Americans would be somewhat of very uncomfortable with an atheist president. When the results are broken down by political affiliation, we see fully 80% of Republicans and 70% of Democrats were opposed to an atheist president. (56% of independents were somewhat or very uncomfortable with an atheist.)

Gallup showed similar results in 2012, where a survey showed only 54% of Americans would be willing to vote for an atheist candidate as president. Gallup has been asking this question since 1958, and although perception of atheists has improved in that time, it’s still poor. 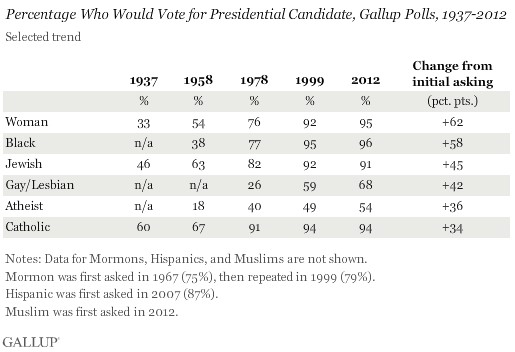 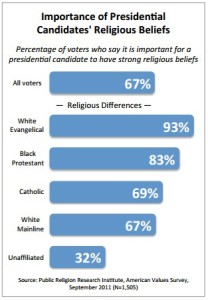 The Public Religion Research Institute’s survey further showed that two-thirds of Americans considered it important that a president had ‘strong’ religious beliefs. This figure rises to 93% for white evangelicals, 83% for black Protestants and 69% for Catholics.

The Public Religion Research Institute although faithfully reporting the statistics, favours religion, and was thus determined to show atheists in the worst light possible. On pages eleven-twelve of the 2012 report they presented anecdotes of from those who had left religion. They included, “One respondent cites his military experiences as the reason he left the Catholic Church: “I was raised in a Catholic house, and one commandment is thou shall not kill. In the army, I was a sniper, so for me to do my job, it was something I left behind.” The conclusion we are obviously supposed to draw here is that not believing in God makes you a killer.

The animus against atheists around the world is sickening. There are still countries that have the death penalty for atheists, and it is used. Despite that, the number of atheists continues to grow, and by the end of the century it’s likely we will be in the majority worldwide. But don’t worry theists; we are good people and we won’t treat you the way you treat us. We believe in the freedom to believe, as well as the freedom not to believe.