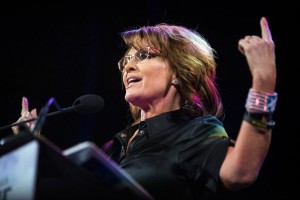 And you thought the Republican race couldn’t get anymore bizarre!

This link was sent to me by my brother. He’s been a Republican supporter for a while. His profile is one that is typically Republican – white male, businessman, MBA from Yale, former Wall Street trader for a company that everyone knows the name of. And he’s been loyal to them despite what he thought were embarrassing mistakes like 2008 with Trump’s pursuit of the birther issue and Palin as John McCain’s pick for vice-president. But he told me at Christmas time that he’s now officially a Democrat. “The candidates are a bunch of idiots,” he noted. And he doesn’t mean stupid – many of those running are clearly extremely intelligent. (My own theory is that recognition of their own intelligence means that they think they can’t learn anything from anyone else.) But all the words that come to mind are insulting to the mentally ill, so “idiots” is about the only one of his words I can use here.

From the New York Times:

Sarah Palin, the former Alaska governor and 2008 vice-presidential nominee who became a Tea Party sensation and a favorite of grass-roots conservatives, will endorse Donald J. Trump in Iowa on Tuesday, officials with his campaign confirmed. The endorsement provides Mr. Trump with a potentially significant boost just 13 days before the state’s caucuses.

“I’m proud to endorse Donald J. Trump for president,” Ms. Palin said in a statement provided by his campaign.

Palin, as the Times notes, has a very high media profile, and Trump is suitably pleased with the endorsement:

“I am greatly honored to receive Sarah’s endorsement,” Mr. Trump said in a statement trumpeting Mrs. Palin’s decision. “She is a friend, and a high-quality person whom I have great respect for. I am proud to have her support.”

Palin has apparently maintained and continued to develop relationships in Iowa since her time as McCain’s running mate.

“Over the years Palin has actually cultivated a number of relationships in Iowa,” said Craig Robinson, the former executive director of the Republican Party of Iowa and publisher of the website The Iowa Republican. “There are the Tea Party activists who still think she’s great and a breath of fresh air, but she also did a good job of courting Republican donors in the state,” he added.

This is significant. For some time I’ve been wondering how Trump would do in caucus situations. He’s attracted a lot of people to his rallies, and he’s got people to name him as their preference in polls. That’s not the same thing as getting registered Republicans out on a cold night to caucus for you at the grass roots level. My assumption for the last few weeks has been that Ted Cruz would win the Iowa caucus despite trailing Trump in the polls because his on-ground organisation was better. However, if Trump can tap into the relationship base Palin has developed, especially with the Tea Party, that could make all the difference.

So, until this happened, there was the strong possibility that the man who is running on being a winner could come out of the first caucus a loser. That has changed today. The only good thing about this is that it damages Cruz, who is a far scarier prospect than Trump, and that’s saying something.

The Times also points out:

Mrs. Palin, who is to appear alongside Mr. Trump at a rally on the Iowa State University campus in Ames late Tuesday afternoon, could amplify the news media-circus aspects of Mr. Trump’s candidacy: Like him, she is a reality-TV star accustomed to playing to the cameras and often accused of emphasizing flash over substance.

What’s more, while Mr. Trump has already shown the ability to garner wall-to-wall cable-news coverage, Mrs. Palin’s active involvement in his campaign could help him deprive Mr. Cruz of vital attention in the homestretch to the Feb. 1 caucuses.

The evangelical vote is particularly important in Iowa, and there has been concern expressed that Trump doesn’t quite “get” Evangelicals. He’s tried to run-down Ben Carson by expressing suspicion of his religion (Seventh Day Adventist), for example, and that just didn’t wash with them. (See here for my take on Ben Carson and Seventh Day Adventist beliefs.) However, this endorsement seems to have got Trump the approval of the ghastly Ralph Reed, founder and chairman of the Faith and Freedom Coalition. As Wikipedia notes:

Reed designed the coalition as a bridge between the Tea Party movement and evangelical voters. The organization has grown quickly with hundreds of thousands of supporters and several hundred local chapters. Reed and his organization were a major supporter of the Romney-Ryan campaign in 2012 after organizing a debate for the Republican candidates, and a state chapter was also involved in state elections in 2011.

The New York Times received the following comment from Reed about Palin’s endorsement of Trump:

Palin’s brand among evangelicals is as gold as the faucets in Trump tower.

So while we can be pleased the extremely scary Cruz isn’t going to get it all his own way, we’re going to have a whole lot more of Palin to (not) look forward to in the campaign coverage. Still, it’s guaranteed to provide some comic moments:

Who knows what’s coming next?! Any predictions?