Roseanne Barr is Racist (plus Tweets) 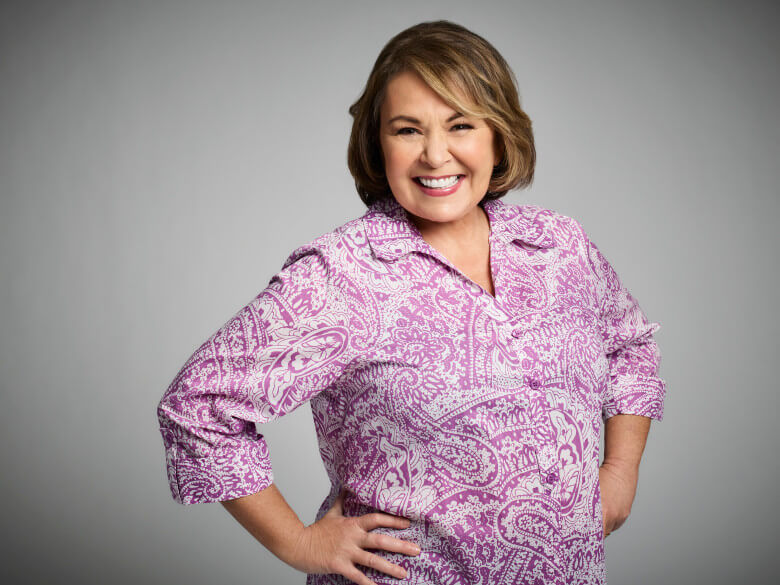 I wasn’t going to write about this. But, there are heaps of cool tweets today and I need a topic. The stuff I’m writing already is too long to head a Tweets Post, so Roseanne Barr it is.

I didn’t watch her show way back when. It didn’t appeal. I tried one episode a few months ago of the comeback, but I didn’t find it funny or enjoyable, or anything else. So that was it. Give me Big Bang Theory any day.

I’m pretty sure that everyone who is likely to read what I write thinks the tweet that got Roseanne Barr into trouble is disgusting. In case anyone hasn’t caught up with it yet, here it is in all its infamy: 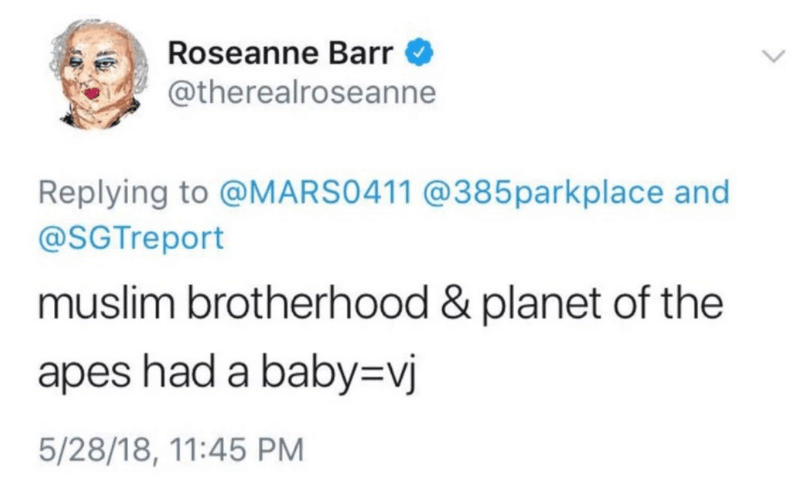 vj is, of course, if Valerie Jarrett, who was a senior advisor to President Obama in the White House and still works closely with him.

ABC did the right thing and immediately cancelled the show. Before they’d even done that at least one senior staff member on the show resigned in protest. Several cast members have come out against the comment.

Roseanne apologized and made excuses for her behaviour. She put the blame on the sleep aid Ambien® and the fact that it was Memorial Day! Those tweets are gone too for obvious reasons. Now we have these two instead:

hey guys, don’t defend me, it’s sweet of you 2 try, but…losing my show is 0 compared 2 being labelled a racist over one tweet-that I regret even more.

I apologize to Valerie Jarrett and to all Americans and I am truly sorry for making a bad joke about her politics and her looks. I should have known better. Forgive me-my joke was in bad taste.

The makers of Ambien® made an hilarious response: that racism wasn’t a side effect of any of their medications.

While trying to find Roseanne Barr’s tweets, I went through her Twitter account for the last couple of days. She hasn’t written much herself, but she has retweeted a huge number of tweets that support her, and the mood in many of those tweets is ugly. A lot of her defenders clearly have no problem with that initial tweet.

The most reasonable among them like Ben Shapiro are calling this a free speech issue, comparing it to football players kneeling for the national anthem. But it gets much, much worse. (You can look at Roseanne’s tweets here.)

Interesting to see the crossover between people who thought the NFL banning kneeling for the anthem was a First Amendment debacle, but think ABC didn’t raise any First Amendment issues by firing Roseanne. (/1)

Well, that’s because it’s not a First Amendment issue. Apples and Oranges. Ben Shapiro should know better, but I’ll get to that in a bit. First a few examples.

There are trends. Anti-intellectualism is one:

“Of all ignorance, the ignorance of the educated is the most dangerous. Not only are educated people likely to have more influence, they are the last people to suspect that they don’t know what they are talking about when they go outside their narrow fields.”

And there are conspiracy theories:

????BREAKING: According to sources ABC President Channing Dungey had a long conversation via phone with former First Lady Michelle Obama before deciding to cancel the Roseanne show. Michelle Obama was reportedly enraged and insisted an apology was inadequate……developing pic.twitter.com/ISgrA6oC7F

. @THEHermanCain on ABC canceling #Roseanne: “I believe they were looking for a reason to cancel #Roseanne and here’s why. Even though the show was a ratings success, forces within ABC didn’t like the fact that her conservative defense of certain things was so popular.” pic.twitter.com/WPe65CZjo2

I suspect this one is a Russian proxy or similar.

This Rosanne thing was always a proxy for Pres Trump. They brought the show back so they could inevitably cancel the show when she said something they didn’t like. They can’t beat Trump so this is a symbolic show of force. Rosanne was always going to end this way.

As with many conspiracy theories, the logic is lacking.

They also needed a reason to discredit her, because of other comments she’s made – notably in regards to Soros et al. If they silence her over that overtly, though, it’s too obvious – so they JUMP on the *seemingly* racist comment, to tarnish her credibility and ruin her.

Did every black American die?

My guess is Roseanne didn’t know Jarrett is black. I didn’t. https://t.co/NvnF7In5IP

Lionel (of the above tweet) thinks this is a turning point in US society. His belief is that people will look back at the firing of Roseanne and see that it was the moment that the left went too far. This is where conservatives began winning again apparently. (Apparently it wasn’t when Trump won the election after all!) There’s a new hashtag on the far right: #WeAreWinning.

And everyone knew it would happen, but it was still a shock when it did: President Trump managed to make the whole thing all about him.

Bob Iger of ABC called Valerie Jarrett to let her know that “ABC does not tolerate comments like those” made by Roseanne Barr. Gee, he never called President Donald J. Trump to apologize for the HORRIBLE statements made and said about me on ABC. Maybe I just didn’t get the call?

Then Roseanne decides to get back into it:

you guys make me feel like fighting back. I will examine all of my options carefully and get back to U.

I’m not a racist, I never was & I never will be. One stupid joke in a lifetime of fighting 4 civil rights 4 all minorities, against networks, studios, at the expense of my nervous system/family/wealth will NEVER b taken from me.

Can you all help me get more followers here? The more I have the more my words will have weight. I am a fighter 4 FAiRNESS in all aspects of US life. I am tired of being smeared-over a stupid mistake erasing 30 yrs of activism.

You have always been a pillar of equality and acceptance. True fans and those closet to you, know you are the furthest person from racist. I’m sad to see your costars not speak up and defend that. #IStandWithRosanne

And then Roseanne retweeted this:

Can someone explain to me how the comment was racist? I thought it was funny and I am not white.

Who cares if her comment was distasteful. Only PC controlled brainwashed Status Quo worshiping slaves that didn’t learn in grade school “sticks and stones can break my bones, but words will never hurt me” would be offended.

Mexican here…. I do NOT think you’re a racist Roseanne…

And this, which means we’ve gone full circle:

I’m back! There is something called a First Amendment in America. Without that, we have nothing. It’s under attack in so many ways. We fight for that!

But let’s be clear. This is not a First Amendment issue. No one is telling Ms Barr what she can and can’t say. The NFL, on the other hand, is telling their employees that they cannot protest. Legally, I would assume they have a right to do that because the players are their employees. I think they are wrong to take that stance however, and note that one of my own more popular tweets in recent days has been this one:

The #NFL owners are on both knees to #Trump#TakeAKnee pic.twitter.com/Bzvjb3rUZ0

With all the criticism of the identity politics tactics of the authoritarian left, you’d think the authoritarian right would eschew such tactics. However, all of a sudden Ms Barr seems to be reclaiming her status as a Jew. Left-leaning media are playing an old clip of her dressed as Hitler and baking gingerbread children in the oven. So, her Twitter feed now has multiple tweets in support of Israel and she’s retweeting things like this:

I’m not sure, but I think I spent the last 24 hours watching the party of inclusion, diversity, understanding, and acceptance, lynch a Jew.#Roseanne #ValerieJarrett #EverydayRacism #Ambien pic.twitter.com/01A8GrbC0D

The New York Times article that Barr tweets here is from a couple of weeks ago, but it’s pretty good. If the off-screen Barr was acting like the on-screen Roseanne, things would be different. But she didn’t.

Comparing Valerie Jarrett to an ape cannot accepted. If ABC hadn’t cancelled the show, there would soon be an advertiser boycott. This way they’ve cut all the drama off at the pass. Got the pain over quickly.

It looks like it might all work out for everyone anyway. ABC are looking at a new show for the ‘Roseanne’ co-stars, and a conservative media outlet is looking to pick up Barr.

And to end on a better note, Trevor Noah does a good job with the subject.

Now we need some nice stuff. No politics or anything else. Mostly cats and otters, but other animals too.

Being protective of his mum …

And if this doesn’t make you smile, nothing will …

This is just what I needed today! pic.twitter.com/NUvXQ9gtG9

When people saw this tiny little squirrel dangling from a thorn way up high in a tree, they knew they’d do anything to save his life ???? pic.twitter.com/14nY6czucl

30 May was World Otter Day, and there was plenty to celebrate the gorgeous creatures.

I can’t stop laughing. Listen to his little voice. And how he turns into a little gremlin at the end. ???? #WorldOtterDay2018 pic.twitter.com/2OgMDFX8YQ

On #WorldOtterDay here’s a couple of otters holding hands so they don’t float away from each other ???? pic.twitter.com/rniYzSDmXb

Otter moms let baby otters float on their stomachs to keep them dry and now I can’t stop crying pic.twitter.com/t6EJBIus7B

This otter gets so excited when he sees his favorite kayakers ???? pic.twitter.com/xbqCQbtre6

Otters on a keyboard, I know, I know, it’s serious.#WorldOtterDay pic.twitter.com/pNp1j15OiN

The Ultramarine Lorikeet is now restricted to a population on just one island in French Polynesia, these exquisitely beautiful parrots are threatened by invasive species such as rats and ants. #TWC_BIRDS #TWC_BIRDS_Oceania (Don’t forget to vote in our poll) pic.twitter.com/2dYQXb1Pp8

With a wingspan of over 3m, the majestic Southern Royal Albatross is one of the largest seabirds in the world. They cruise the Southern Ocean only coming to land every 2yrs to breed on New Zealand’s Campbell Island #TWC_BIRDS #TWC_BIRDS_Oceania (Don’t forget to vote in our poll) pic.twitter.com/FlNoZwFIAy

Standing at half a metre tall, almost flightless & with a series of calls ranging from croaky hisses to shrill yapping, the Kagu is a ghostly inhabitant of the New Caledonia rainforest floor. #TWC_BIRDS #TWC_BIRDS_Oceania (Don’t forget to vote in our poll) pic.twitter.com/BW1BjTkgKL

The Little Spotted Kiwi is the littlest kiwi in New Zealand, but this rare bird lays an enormous egg compared to its body size- a whopping 26% of its body weight! #TWC_BIRDS #TWC_BIRDS_Oceania (Don’t forget to vote in our poll) pic.twitter.com/l0VOL20w0S

Ever get the feeling you are being judged? pic.twitter.com/B2WvI54pqT

such a sweet lil cat