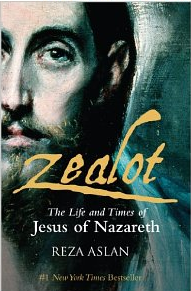 There was a window when Reza Aslan had my sympathy. At the end of July Fox News reporter Lauren Green interviewed him about his book Zealot: The Life and Times of Jesus of Nazareth. Green’s opinion seemed to be that as a Muslim, Aslan had no right to write a book about Jesus and the whole thing was some kind of anti-Christian plot. It was bizarre and truly cringe-worthy. I was one of the many who tweeted and retweeted this interview as an example of both poor journalism and Islamophobia.

It wasn’t long before my usual opinion of Reza Aslan re-asserted itself though, which mostly arises from the starring role of Islamic apologist he has assumed. Whenever Islam is disparaged in the US media, Aslan is ready with a patronizing grin to point out why that criticism is just bigotry. It seems any correlation of belief in Islam with bad behavior by an individual Muslim is either an unsophisticated understanding of religion, a facile comparison, or simply Islamophobia. He’s entitled to his own opinion of course, but he’s not entitled to his own facts. In one of his recent forays onto TV to counter a monologue by Bill Maher he made multiple incorrect statements about female genital mutilation (FGM) and its relationship with Islam. Several of those statements have since been parroted by others with the assumption they are accurate. 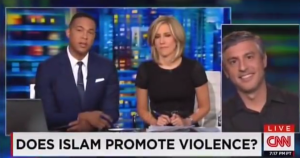 Amongst other things, Maher referred on his show to the issue of female genital mutilation in Muslim countries. CNN Anchors Alisyn Camerota and Don Lemon asked Aslan for his response to this. Aslan denied FGM was even an issue in Islam. “FGM is not an Islamic problem, it’s an African problem,” he stated. When he was challenged on this by Camerota and Lemon he doubled down: “… that’s actually empirically, factually, incorrect. It’s a central African problem.” He then referred to the FGM statistics for Eritrea (almost 90%) and Ethiopia (75%), both Christian countries. Aslan further commented, “Nowhere else in the Muslim majority states is female genital mutilation an issue. But again this is the problem: you make these facile arguments like that women are somehow mistreated in the Muslim world …”. And later, “In Indonesia women are absolutely 100% equal to men.” Aslan has since referred to the CNN interview as another example of anti-Islam bigotry in the media.

(You can see the full interview here.)

FGM has existed for at least centuries, and probably millennia. It was around long before Islam, so Aslan can rest assured that I’m not going to try and pin the blame for its origins on Muhammad. However, there can be no doubt that Sunni Islam has adopted the practice and made it part of its traditions, and not just in Africa. Africa’s role is that it is the only continent where religions other than Islam practice it. However, when health workers visit Christian communities to explain the negative health effects of FGM, none of the people say, “We do it to express our faith in Jesus.” It’s a different story in Muslim communities.

Yes, FGM is an issue in predominantly Christian Eritrea, where UNICEF reports a rate of 84%. Aslan reports a figure of “almost 90%”, and it’s likely that Aslan’s figure is more accurate due to under-reporting now that it’s banned. It’s an issue in predominantly Christian Ethiopia too, which UNICEF says has a rate of 74% (not Aslan’s 75%). Other African countries in which FGM is an issue include Guinea (97%), Somalia (96%), Djibouti (93%), Egypt (91%), Sierra Leone (90%), Mali (89%), Sudan (88%), Burkina-Faso (76%), Gambia (76%), Mauritania (69%) and Guinea-Bissau (66%), all of which are Muslim. UNICEF reports FGM is still an issue in 27 African countries, 15 of which are Muslim. In general, the rate of FGM is higher in Muslim countries than in non-Muslim ones. This is because of the role faith plays in the decision of parents to have their daughters circumcised (as they call it). I’ll go into this further below.

Aslan insists that FGM is virtually unknown outside Africa. He particularly likes to use Indonesia as an example when lauding Islam. He stated, as already mentioned above, “In Indonesia, women are absolutely 100% equal to men.” Well, tell that to the estimated 140 million Indonesian women and girls, all Muslim, who have been subjected to FGM, usually before they are a year old. In Indonesia, FGM is absolutely an Islamic practice. Until Islam came to Indonesia, it was unheard of. It was introduced in the 13th century along with Islam and Muslim communities are the only ones that practice it. Indeed in some regions, the practice is carried out annually as part of the celebrations for Muhammad’s birthday. As recently as 2013 Indonesia’s top Muslim clerics, the IUC (Indonesian Ulema Council), came out in support of FGM. Although it acknowledged FGM wasn’t compulsory, it recommended it for both moral and religious reasons. The Council has also been lobbying the government to “circumcise” girls to bring it in line with Islamic teachings.

CNN itself did a story about FGM in Indonesia back in February:

FGM is present throughout central, southern, and south-east Asia including Afghanistan, Pakistan, India, Malaysia and the Philippines, but only in Muslim communities. Using Malaysia as an example, although at least 80% of Muslim women are victims of FGM, the practice is not carried out in any Christian, Hindu or Buddhist communities. In the Maldives, Imams renewed their calls for FGM to continue just this year. FGM is also widespread throughout the Middle East. It is much more difficult to obtain accurate figures of its prevalence in these countries but there is no doubt it exists in large numbers. In all these countries it was introduced as part of Islam.

Reza Aslan’s characterization of female genital mutilation as an “African problem” is simply wrong. Except for in Africa, FGM is solely a Muslim issue. Within Christianity, the Bible has been used to justify much that is evil over centuries – FGM is not one of them. Therefore, those seeking to get the practice banned can concentrate on education to get the message through. Education is not enough in Islam though because Muslims carry it out as an expression of faith. 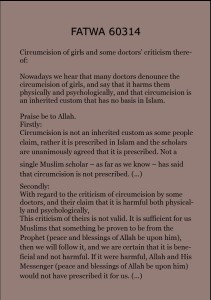 In Sunni Islam, there are four schools of jurisprudence that express an opinion on the matter. Two of them, the Hanbali and Shafi’i schools, consider FGM obligatory, while the other two, the Hanafi and Maliki schools, recommend it. In addition, there have been several fatwas issued regarding FGM over the years, the majority of which favour it. (Fatwas are not compulsory, but devout Muslims consider them morally imperative.) For example, Fatwa 60314 includes statements that express the importance of FGM within Islam and dismiss the opinions of doctors.

The belief that FGM is an expression of faith if you are a good Muslim is widespread, insidious and promoted by religious leaders. Even in those Muslim countries where it has been banned, there is push-back by religious leaders. In Egypt for example, FGM was finally banned after several failed attempts in 2008. However, it is still being carried out outside hospitals and the Muslim Brotherhood has a campaign to get the law overturned. Mariz Tadros reported in May last year that “the Muslim Brotherhood have offered to circumcise women for a nominal fee as part of their community services”.

So Mr Aslan, next time you want to accuse CNN or anyone else of bigotry for making unsophisticated generalisations about Muslim countries, please try to get your facts straight. If even one girl or women is subjected to FGM, that is a problem, and FGM is carried out throughout the Muslim world as an expression of faith. Instead of saying, “it’s not a Muslim problem,” how about using your voice to speak up for those who are subjected to it, almost exclusively women and girls who do not have a say in the matter.

Note: In most Western countries, FGM is illegal. In several, including New Zealand, Australia, Norway, the Netherlands, Sweden, and the United Kingdom, it is also illegal to take a child overseas to have the procedure carried out, even if it is legal in the country where it is performed. Not all US states have specific laws, but there is a federal law against it and where states don’t have a law, prosecutions are carried out under child abuse and battery laws.