The Problem of North Korea

On Saturday morning New Zealand time, North Korea carried out its latest missile test – a modified mobile Scud which it launched towards the Sea of Japan. The test was a failure – the missile blew up over North Korean territory. The fact there was a test, and the type of missile, is highly significant. It came a day after US Secretary of State Rex Tillerson lead the UN Security Council in a debate on what to do about North Korea, including demanding that they stop testing. Also, the missile’s design purpose is for use against targets like the aircraft super-carrier USS Carl Vinson which is now in striking range of North Korea.

By Sunday (30 April) the THAAD missile defence system was up and running in South Korea according to Reuters. There is a caveat that no wartime test has ever been done on the system, so it may be that the a major attack from North Korea could overwhelm the system. North Korea certainly has enough weapons to make that a possibility. Further, most of the weaponry that North Korea could use against South Korea is artillery that the defence system couldn’t stop. Therefore, the people of South Korea, especially the 25 million in the greater Seoul region, are still in significant danger. (See below for more information about THAAD.)

The issue of North Korea, or more specifically her leader Kim Jong-un, is becoming more serious by the day. Everyone knows there’s a problem, but what to do about it is another matter. Anyone who thinks they have the answer probably doesn’t understand the question. Until recently, it felt like this is what was going on: 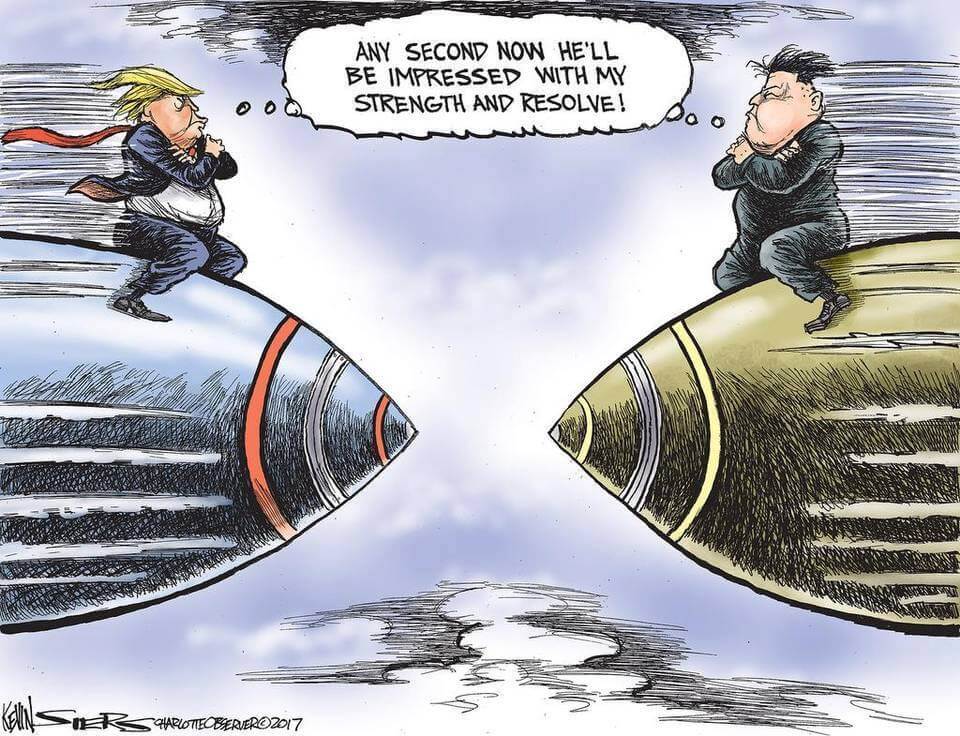 In recent days, briefings from US generals and other advisors, as well as input from President Xi, have meant that President Trump is finally starting to understand how difficult the North Korea Problem will be to resolve. He still manages to mess things up though, such as when he indicated the US was going to break an earlier agreement on which parts of THAAD the US would pay for, and which parts South Korea would pay for. Lieutenant General HR McMaster, the White House National Security Advisor, had to intervene to reassure the South Korea government that the US would honour their commitments.

Suffice to say, it is an extremely complex situation with multiple variables. However, it is currently significantly more dangerous than it has ever been for three main reasons:

1. The leader of North Korea not only lacks experience, he appears to be excessively paranoid. It is difficult to know whether we can be confident he is rational.

2. The new president of the US, Donald Trump, is also a neophyte. He has a tendency to think there is a simple answer to all questions, and the only reason a problem remains is that he wasn’t on the job. Until very recently he did not grasp the complexity of the North Korea situation, and damage has been done, and continues to be done, by his multiple ill-advised comments.

3. North Korea appears close to developing long-range missile technology so they achieve their dream of having a weapon capable of reaching the US.

4. North Korea has nuclear technology and are continually working on miniaturizing a bomb to enable the mounting of a nuclear warhead on missiles.

It may actually be that North Korea already has long-range missile technology; perhaps the only reason their missiles continue to explode after launch is due to hacking by the US or another power. There has, of course, been no confirmation either way that this is the case.

This is the Wall Street Journal‘s summary from early April, from this article.

This is the same article that is the origin of the story about President Xi of China schooling President Trump about North Korea. It states: 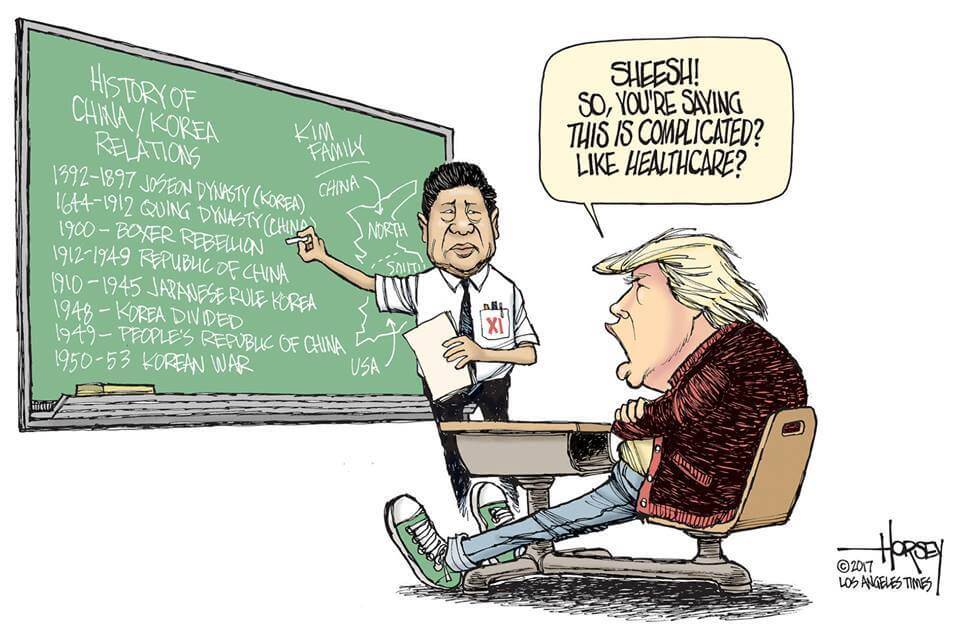 Mr. Trump said he told his Chinese counterpart he believed Beijing could easily take care of the North Korea threat. Mr. Xi then explained the history of China and Korea, Mr. Trump said.

“After listening for 10 minutes, I realized it’s not so easy,” Mr. Trump recounted. “I felt pretty strongly that they had a tremendous power” over North Korea,” he said. “But it’s not what you would think.”

China sees the Asia-Pacific as their sphere of influence and resent any encroachment in the region by the US. One of the main reasons President Obama had for supporting TPP was that it was a counterweight to growing Chinese economic power in the region. TPP would have moved economic power away from China and back to the US. China is very happy Trump has taken the US out of TPP.

On the other hand, China is unhappy about the US military being in what they see as their seas, especially around South Korea and Japan. China also opposes the installation of THAAD in South Korea. They see these and other moves as potentially threatening to their status and future as a superpower.

At the moment China can’t challenge the US economically or militarily, but they are working hard to change that. Their economy has been one of the fastest growing in the world this century. This has seen them surpassing Japan as the world’s second largest economy. Much of the extra money has been put into growing their military. 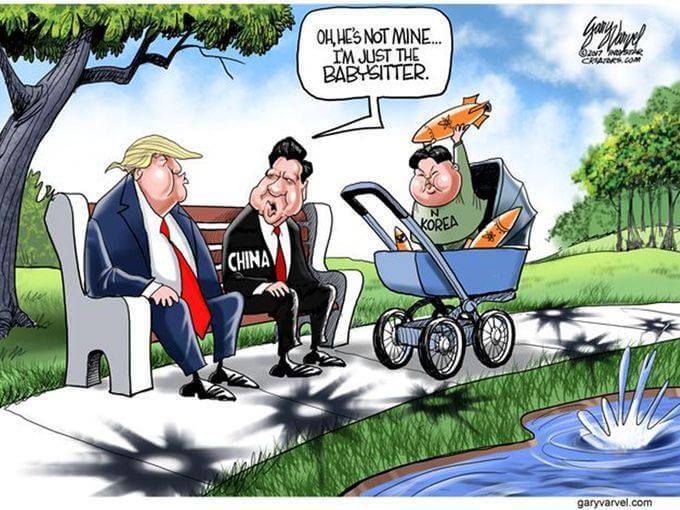 There are four main reasons China wants to maintain the status quo with North Korea. (All are inter-woven in some way, so these divisions are somewhat arbitrary.)

1. Currently, they have the most influence in North Korea. They naturally want to maintain that position of power.

2. War, or indeed any major unrest, would see millions of North Koreans pouring over the northern border into China. China naturally does not want to deal with that. Their economy is strengthening, but could not handle that, and it would set them back.

3. China fears that a collapse of the North Korean regime would see South Korea taking over leadership of the entire peninsula. South Korea, of course, has closer ties with the US than with China. Therefore, South Korea taking over the peninsula would mean a US ally on the Chinese border. This makes China uncomfortable, which is understandable even if you don’t agree they have justification for this fear.

4. This third reason has become of greater importance since the assassination of Kim Jong-un’s brother, Kim Jong-nam. He was under the protection of China and his main residence with his wife was there. China saw him as someone they could install as a puppet leader in the event Kim Jong-un lost power (whether by accident or design).

Also, China is discovering they have less control over Kim Jong-un than they did his father. Kim Jong-nam’s death has left China without an obvious candidate to rule North Korea instead of Kim Jong-Un. Thus, they need to find a way to bring Kim-Jong-un into line. He is their only option now.

China has always publicly said that they agree with the international position on the Korean peninsula: that it be nuclear free. In the past they have done nothing to advance that cause though. 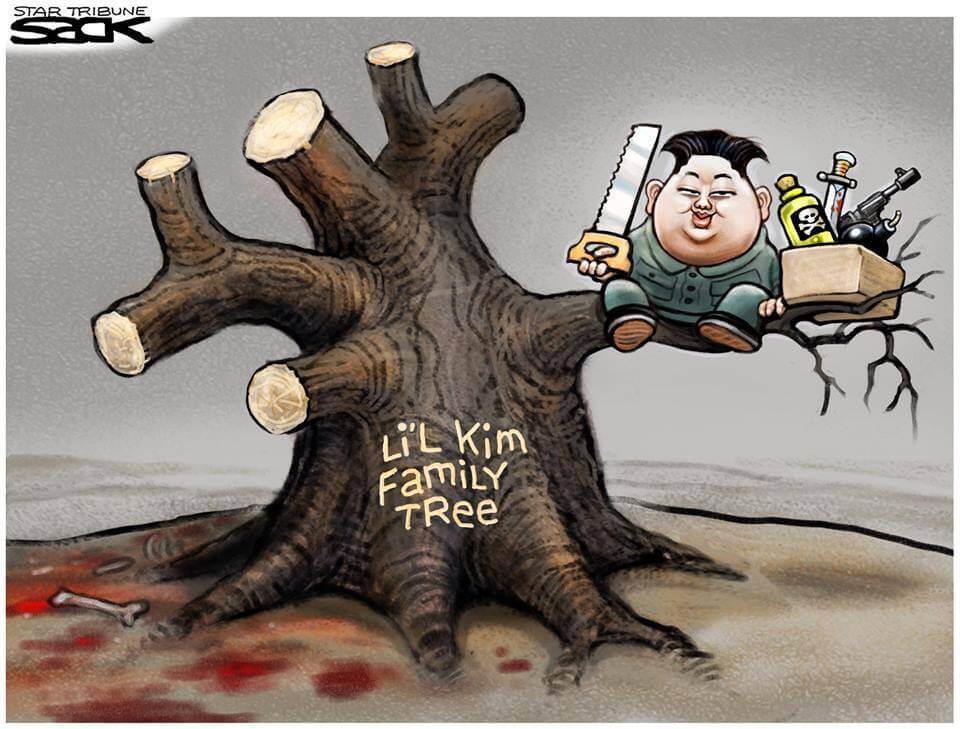 Kim Jong-nam was the older half-brother of Kim Jong-un. He was the eldest son of the former leader of North Korea, Kim Jong-il, and his mistress Song Hye-rim, a popular actress.

In February, Kim Jong-nam’s death in the Kuala Lumpur international airport made headlines worldwide mostly because of who his brother is. The Malaysian authorities soon made the discovery that Kim Jong-nam was the victim of a complex murder plot by North Korea.

Kim Jong-nam himself was not an attractive personality. He had a wife and two mistresses. His wife and one of his mistresses had children with him. He spent his time flying between them in China and Malaysia, and the gaming tables of Macau, where the second mistress had her home.

Kim Jong-un had his brother killed so China wouldn’t try to put him in his place. He may not have got quite the freedom he was after though.

Kim Jong-un is now China’s best option, so I think they will try harder to get control of him than ever before. I think this the main reason China is now cooperating with the US and the United Nations in a way they haven’t before.

There have been heavy and steadily increasing UN sanctions against North Korea for some time. China frequently took little notice of them. In the last few months though they have been acting more collaboratively. Their recent action in turning back a coal shipment from North Korea gets frequent mention by the talking heads.

A fleet of North Korean cargo ships is heading home to the port of Nampo, the majority of it fully laden, after China ordered its trading companies to return coal from the isolated country, shipping data shows.

With the exception of the US president, the US Administration appears to be handling the North Korea situation well. Secretary of State Rex Tillerson and Secretary of Defense Jim Mattis are keeping in constant contact. Tillerson states neither makes a move without speaking to the other, which is encouraging. The National Security Advisor, HR McMaster is also cooperating with them, and UN Ambassador Nikki Haley appears to be doing a good job so far too.

Tillerson, Mattis, and McMaster have given their president good talking points, and when he uses the words they gave him things look okay. When he goes off script, things get dicey. Just yesterday we got this example: President Trump said to Bloomberg

If it would be appropriate for me to meet with him, I would – absolutely. I would be honoured to do it. 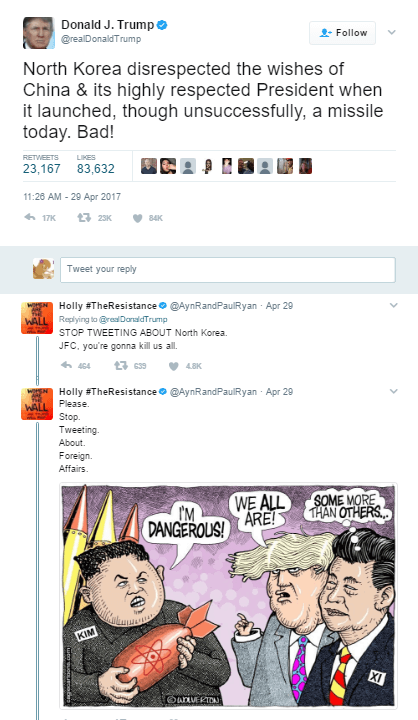 That’s fine, because the comment includes the caveat, “if it would be appropriate”. It keeps the diplomatic option open. Those who are criticizing this are, in my opinion, only doing it because it was Trump who said it. Of course, there would be all sorts of negotiations behind the scene before such a meeting could possibly occur. Trump does have a good national security team (now that Mike Flynn and Steve Bannon aren’t part of it) and they would make sure everything was done properly.

The day before though, Trump was calling Kim Jong-un a “smart cookie” and praising the way he had his own uncle killed. He also continues to Tweet as the mood takes him. He doesn’t see to appreciate how dangerous that could be.

World War III probably won’t break out over North Korea. There’s even a chance all the parties could get together and negotiate a nuclear weapons free Korean peninsula. If something goes wrong it will be because someone makes a mistake, and someone else overreacts.

If you enjoyed this post, please consider donating a dollar or two to help keep the site going. Thank you.

According to Wikipedia, THAAD is a

The design is by Lockhead Martin, who also manufacture it for the US government. 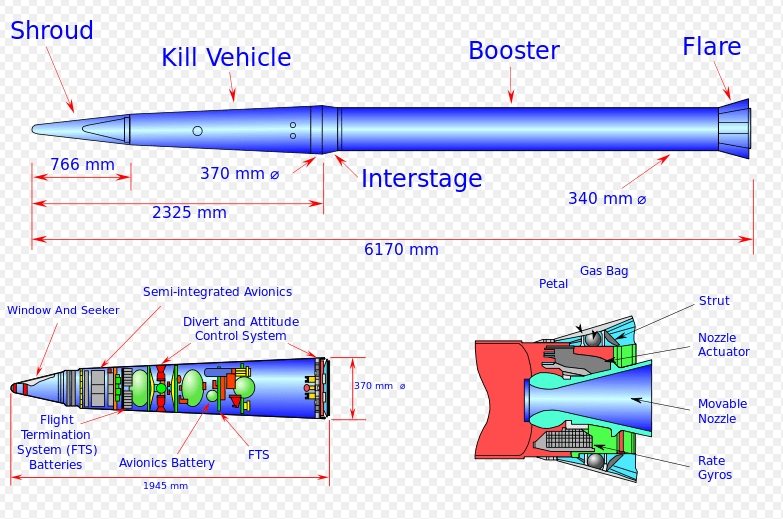 There was a test of THAAD at the Pacific Missile Range Facility in June 2008: