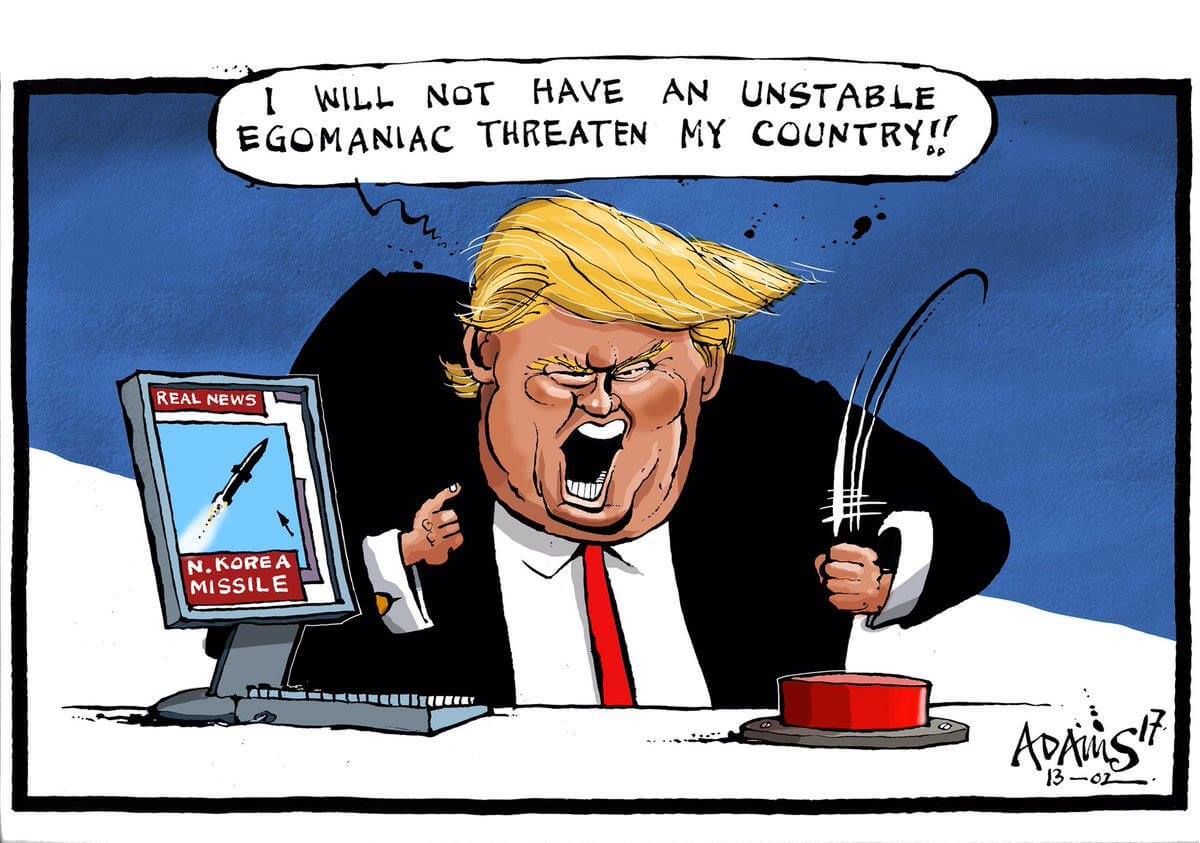 I’m looking for a new name for this daily offering than “Top Tweets”. I want to reflect that there’s a current events comment here too. If any of you can think of something, let me know.

I said I’d write about the North Korea crisis today, but it’s such a complex issue it’ll take a lot more than my daily comment to get through it. Here’s a summary though.

Overall, I think the world should worry about Donald Trump than Kim Jong-un at this stage.

Kim may be a sociopath, but he’s not crazy. He’s in his early thirties, and he wants to keep ruling his country for decades to come. He will not start a war because he know that would lead to his death and the ruin of his country. He knows he would lose.

North Koreans, including Kim, genuinely believe that they need nuclear weapons to be safe. They feel they could be taken over at any time unless it would be too risky for their enemies to start a fight. As far as they’re concerned, having nuclear weapons makes them safe. It means there will not be an invasion by the US.

Donald Trump, on the other hand, is not so easy to predict. There is little that is keeping him in check. He is desperate to prove that he is worthy of the office of president, and it won’t have escaped his notice that his approval ratings went up slightly following the bombings in Syria and Afghanistan.

The generals are keeping Trump in check. He respects them, and that means he listens to them. However, he knows deep down that he’s failing as president and if he doesn’t find a way to feel successful through peace, war is the route he’ll take. If he doesn’t get better at the job soon, let’s hope Mueller finds something that will lead to impeachment. It could be the world’s only hope.

Before we get on with the usual tweets, here’s one of the fire in California.

This would make a good start to a horror movie!

Someone must be reading my mind!

How To Tell If Your Cat’s Secretly Planning To Kill You https://t.co/Z9GRJczAAg

One of my favourite cat pics ever!

I’m not a dog person, but these are undeniably cute!

Look at those fluffy ears pic.twitter.com/S7ZHJf8VUS

There’s some interesting stuff about a reptile in this video too – the crown tree frog.

What is the secret to the incredible endurance of hummingbirds? Their light bodies, long wings, and tiny feet! #NationalHummingbirdDay pic.twitter.com/eGglgDMVaL

The more I learn about birds, the more I want to know.

This bird survives thanks to science providing it with a new beak.

Abyssinian ground hornbill Karl has a prosthetic beak thanks to a @NMNH specimen & innovative tech by our animal care/vets/IT/exhibits team! pic.twitter.com/g0O97yjnWH

My love for red pandas just went up even more!

We need more of this.

Wow! Look at the jaw on that thing!

This ant can snap its jaw 700 times faster than the blink of an eye https://t.co/iYkkNd6NDQ pic.twitter.com/yJRmATbL3s

I must remember to look for more tweets of fossils. They’re fascinating.

#OTD in 1909, Charles D. Walcott, a paleontologist and the fourth Secretary of the @smithsonian, discovered the Burgess Shale #fossils. pic.twitter.com/lK0dkO6zSF

The Burgess Shale #fossils contain both bizarre and familiar species that lived more than a half billion years ago. https://t.co/N1UHeoRXYg pic.twitter.com/dyl6ZXDlxq

“I appoint the best people.” Remember when Trump said that? If they’re so good, why did they all have to go?

LOL @chrislhayes commemorating the firing and resignations from Trump White House with Sarah McLachlan’s “I Will Remember You.” pic.twitter.com/5a1dKUBqBr

Views of terrorist groups in the Middle East.

Oh, the Hypocrisy. No soup for you, @SenTedCruz. pic.twitter.com/0MRAb7dzKk

Don’t thank God, thank the healthcare professionals who cared for you.

It’s science plus doctors and other health professionals who cure you. Make sure you thank them. pic.twitter.com/MwbFiMDSgj

Only just over a century ago, this Brit thought posing with the heads of Maori was acceptable behaviour. Thank goodness his descendants thought better of it. There have been multiple occasions over recent years where these and other Maori heads have been brought back to New Zealand with due honour.

We should not destroy this photo though, and nor should it be kept off social media. It is from such events that we learn.

It’s amazing what was once thought okay. Most, if not all. have now been returned to their families in New Zealand. https://t.co/CSOQkT3YXZ

I told you Canada was bound to be back, and here it is!

This is not my video. But it’s pretty awesome.https://t.co/N7Yscj3bqT

This rough and spiky surface is actually the smooth shell of a White-sand Macoma (Macoma secta), magnified 5000x! #SEMSunday pic.twitter.com/My1tHWdCwE

I wasn’t sure which section to put this cool GIF in.
(Via Ann German.)

Science is improving our lives every day.

Here’s some more info on the new camera.

Check out this BBC article on our camera that can see through the human body. The power and fun of interdisciplinary science @EPSRC_Proteus https://t.co/wqnOms4Dwl