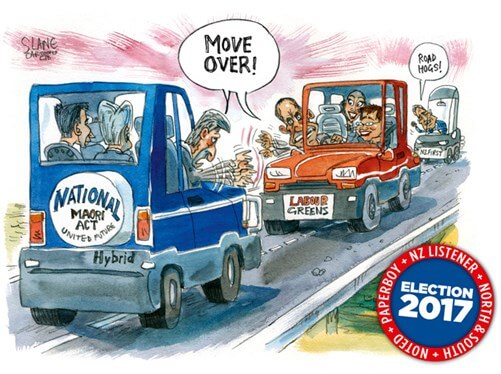 I should be writing about North Korea. I haven’t even included any tweets about that. Maybe tomorrow. Today I’m going into homily mode. It’ll probably piss some of you off.

There’s a tweet in today’s Political Tweets section about the blow-back GOP politicians are facing in relation to healthcare when they go home. My comment asks why politicians can’t get together for the good of the people they represent. Many say that’s not possible. I disagree. All you have to do is get rid of the people who are creating the poisonous atmosphere. Donald Trump. Mitch McConnell. There are several others in both parties. However, a huge proportion of USians vote for whoever their party puts up as candidate, no matter what. What’s happening is the fault of voters and the system as much the politicians themselves. The politicians are never really held to account because of it.

In New Zealand, politics is pretty boring. And you know what? I’m proud of that. We have an election coming up on 23 September. There have been scandals involving most of the leaders of our leading political parties, and except in the notable case of the dreadful Winston Peters (leader, NZ First), politicians haven’t tried to take advantage of them. They rarely do for good reason – it doesn’t work here.

One of the Greens co-leaders had to resign over a major fraud case. None of the other parties talk about it. The leader of the Labour Party had to resign just weeks before the election. The other parties refer to it as an “internal matter for them to sort out”. The current prime minister (Bill English, National Party) was being hassled by the press about a cover-up and his supporters booed the press. English stuck up for the press, and the other parties haven’t taken advantage of the situation. It was discovered that Winston Peters had been over-paid his superannuation for seven years. None of the other parties have used it against him. He is trying to attack others by changing the focus to who leaked the information. It’s not working – his poll results are falling.

There’s a saying in politics that everyone hates dirty politics, but it works. Well, it doesn’t work here. Whenever any party uses dirty tactics, the public turns against them. As a NZer, I’m proud of that. There’s a lesson to be learned from this I think.

We danced all night… pic.twitter.com/OojnJaPBRK

Looks like these 4 #kittens are waiting for something, what could it be? pic.twitter.com/JnPqxQ8DtA

Remember that Star Trek episode where the aliens had half their faces a different colour?

That look that makes them so irresistible …

I love that sideways head tilt that a lot of cats do when you’re talking to them… pic.twitter.com/wWoa32qeNE

Well, it’s obvious. There’s snow on the ground, and a sheep’s back is warm! Smart kitteh!

This #kitty has the right idea…. pic.twitter.com/ANzdLWMyLH

Your girls contribution to the “where do you wanna eat” discussion pic.twitter.com/hAQdNdMEF2

In real life I’m not a fan of goats. When I was working at the Ministry of Agriculture I once spent a day in a woolshed that had just had rutting goats in it for the previous few days. If you’ve ever been around that smell, you’ll know what I mean!

I also killed a kid in a car accident about thirty years ago. It wasn’t my fault but I still feel guilty every time I see a goat. However, there are lots of really cute tweets of kids, and here’s one!

Just some little goats standing on a table.. pic.twitter.com/CwiAslCIWf

A world first – film of doormice building a nest.

It’s amazing what birds will do for sex, and it gives us lots of beauty to enjoy.

A Royal Flycatcher’s colorful crest is usually tucked back, and deployed only for mating. pic.twitter.com/S06upaApb1

I don’t know what “the hard way” means. Perhaps someone can explain. Cool GIF though.

I’ve heard of things like this, but never seen one.
(Via Ann German.)

California Sheephead fish, Semicossyphus pulcher, begin life as females but grow up to be males. pic.twitter.com/0eLf5KL5pG

Some more on the plight of the Rohingya.
(Via SecularNZ)

Whether you were a supporter of Obama or not ( I mostly was), it’s undeniable he was a man of class, integrity, and dignity. Those three words cannot be applied to the current president.

Barack Obama’s parting letter to Donald Trump is the definition of class pic.twitter.com/shH5eKWHAR

You can see the full letter in the link in this tweet.

Exclusive: In the letter Obama left for Trump on Inauguration Day, he lays out four points of advice. Read it here: https://t.co/B82PPFszNs pic.twitter.com/wGD9Ra6Eev

Here’s a good thread to check out re the EPA. Scott Pruitt, in his role as head of the EPA, is doing things like touring a Toyota factory!!!???

I’ve been subscribed to EPA news alerts for over a year now. Since the election, the shift is absolutely nuts. 1/

I’ve been saying this for weeks – I need to write another post about the state of healthcare in the US. The current situation isn’t perfect, but it’s a whole lot better than what was there before. Instead of playing political games, why can’t politicians get together and work for the people they’re supposed to represent?

‘You voted to kill my wife’ – Americans are challenging their representatives at town halls across the country pic.twitter.com/QVPqpEGTNC

The logic of people who pray for help in a disaster always makes me wonder.
(Via Ann German.)

Next time, have a #NationalDayOfPrayer *before* God sends deadly hurricanes our way, not after: pic.twitter.com/yT5tztuC7K

Star Trek’s universal translator is on the way! This is so cool!

These earbuds can translate languages for you in real-time pic.twitter.com/2bI4JLbkLW

This is the future of education in many areas.

Not a problem I’ll be having … (I don’t do illegal drugs!)

Smoking a couple of joints a week? Research warns it may make sperm ‘more mellow’ and swim in circles https://t.co/1UR28xUMMF pic.twitter.com/yRxluGRT2l

Cactus flowers are known for brevity & splendor: w/ more stamens & petals than most flowering plants, they have spectacular bursts of color. pic.twitter.com/BY09otq90x

The essence of the Kiwi spirit: to explore, to innovate, and to always dream bigger. #WhereToNext pic.twitter.com/W84l5w0Xup

The most depressing city I ever seen, Norilsk, Russia. pic.twitter.com/tA1dhfyLWV

One of the oldest houses in Rheinland-Pfalz, built in 1368. Bacharach, Germany pic.twitter.com/fLZNbTrDyU