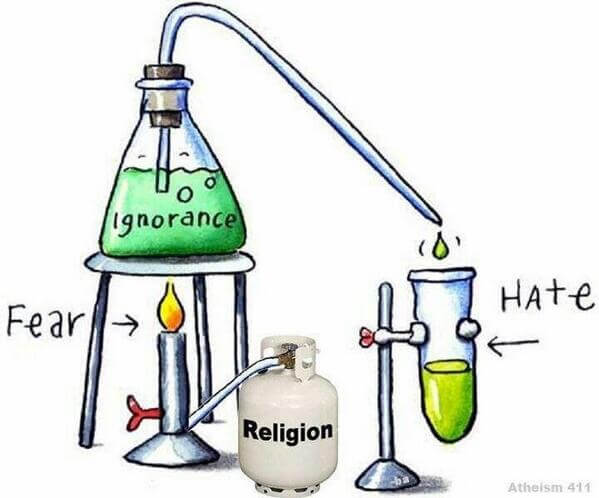 There are some tweets I’ve been leaving out of these posts over the last few days because I’m going to use them elsewhere. I want to mention them though. They’re tweets I was expecting, but their appearance disgusts me nevertheless.

They come from Donald Trump’s greatest supporters, the Evangelical Christians. They’re blaming the current disaster in Texas on same-sex marriage, abortion, LGBT rights, and other similar things. Hurricane Harvey is, they say, a judgement from God for allowing them to happen.

This reaction sickens me, and the mentality of such people is completely beyond me. This is the poison that is religion. If all religious people stuck to the happy-clappy side of things, where their faith inspired them to be kind and good, everything would be fine. However, that’s not the way it works. There are always people who go too far and the problem is, it’s the extremists that have the most scriptural support.

This happens whenever there’s some kind of disaster. There are always religious people who will find some innocent victim to blame and punish. Rosa Rubicondior has just written about another one (see Religion Tweets).

A gift for you.. pic.twitter.com/N4FBXxzeuI

We used to dress our kittens in dolls clothes when we were kids too.

Ready for the party! pic.twitter.com/MtstexfzdX

What happened to its ears?

Love me, love my teddy…. pic.twitter.com/uH8pZfgA6d

Guess who went to the vet today !!! pic.twitter.com/l1f6naz2YP

On the importance of cats.

This kitty gravestone will hit you right in the feels https://t.co/yv6im2cRlI

This is pretty special.

Don’t worry, I’m helping you, not eating you. pic.twitter.com/ce3gVYrrrY

After coming back from playing all day in the park.. pic.twitter.com/rnZQtydndn

I used to go swimming at the beach with our golden Labrador as a teen and in my early twenties. This reminds me of that.

Staring at the water peacefully pic.twitter.com/xcuZCkxVL3

That’s something else none of you know about me. I used to ride horses up until about the age of sixteen.

I love this pic! How could you not?

And this is what happens when your priority is criticizing everything that Obama does, whether right or wrong …

There is a past Trump tweet for literally everything. https://t.co/e6zxJ23aYa

Not only giving out money, but Obama will be seen today standing in water and rain like he is a real President — don’t fall for it.

Mexico was going to pay for the Wall – at least that’s what Trump’s sheep believed. It was never true. Now, because the ignorant base who don’t understand the best way to handle border security isn’t necessarily a wall have to be mollified, money is to be diverted from disaster relief!

Mike Pence isn’t much better than his boss. Remember, when Trump is impeached, this creep will be the replacement.

Video: “Katrina breaks my heart…but we must not let Katrina break the bank for our children & grandchildren” Mike Pence-2005 #ImpeachTrump pic.twitter.com/SxmT8NGEA7

Jared Kushner’s mate is in trouble.

Something to think about.
(Via Ann German.)

Ok this…this needs to go VIRAL. Easily the most accessible way I’ve seen to explain #TrumpRussia to the Gen. Pop.pic.twitter.com/o07dwkCJT1

If you know nothing about economics and you only learn one thing, make it this: TRICKLE-DOWN ECONOMICS DOES NOT WORK.

Who are the job creators? A hard-working middle class. We can’t afford a tax gift to Trump’s corporate cronies. Trickle down is a costly lie pic.twitter.com/Bg6xyXmNEW

There are so many amazing machines making work better and safer.

I’m sure no one here needs convincing about this.

This is what one of the most polluted rivers in the world looks like pic.twitter.com/4nCZDY3T2x

Nature is taking the area back.

It’s worth clicking though to this Rosa Rubicondior article – it’s about a 16th century Catholic Church in Malta. Its roof collapsed recently and LifeSiteNews, a conservative Christian website in the US, is blaming the legalization of same-sex marriage among other things.

Here’s a great response I got to the above tweet!

Why are gay people so easily able to demonstrate terrifying supernatural powers when the best God can do is appear on toast? https://t.co/TCg2fzPU0N

This is pretty sad. There are so many places I would love to see on this list.

I bet you’ve never seen it like this before!

This isn’t a section you’ll see very often, but I couldn’t resist this. To tell the truth, I suspect I might like Melania. I certainly feel sorry for her. I’m not sure if I wrote this before here or elsewhere, but I think she’s the person most sorry Trump won the election. Because of it, she has to stay married to him for at least another four years. I think she shows signs of partner abuse.
(Via Ann German.)

Selfies are not a new thing.

A Self-portrait of Linda, Paul and Mary McCartney, ca. 1969 pic.twitter.com/xIpWP8WBkR

Another great from the same era …

The British showing their great taste in entertainment again – the Beatles, David Bowie and … NO FOX!

Fox News pulled from UK TV because of tiny audience. Just like the hands of @realDonaldTrump #tiny https://t.co/qtT4cY2jth

I’ve never seen anything like this before, and I love it!!!

Just what you always wanted!

This guy had a portrait of Kim Jong-Un shaved into his head pic.twitter.com/GjwEwM0pDk

Another very brave woman in Iran.

They impounded my car &send me 2 court 4 being unveiled.On my way back I have a message
بعد از جريمه#چهارشنبه_های_سفيد #WhiteWednesdays pic.twitter.com/jHvFDz66AM

To not be a feminist is to admit you don’t think women deserve equal respect and dignity to men; that you think they are somehow less human. https://t.co/tssVW3AjRb

I hope he’s treated fairly in prison and court. However, it’s rather ironic to see this piece of trash whining about being a “human being”. His efforts to dehumanize others, especially Blacks, Jews, and LGBT people are perhaps coming back to haunt him.

How can one man perform so many acts of a$$holery?

Mexico offered help to the victims of Hurricane Harvey – and President Trump won’t even acknowledge it pic.twitter.com/BfKaVwxp9I

This is the man that Trump hates, and he’s doing his best to wipe out everything he did.

What was Obama doing during Katrina? He was actually at the Astrodome helping out and wasn’t even goddamn president yet. pic.twitter.com/UFZoGfgxuo

There is going to need to be a major de-brief after this disaster. There have obviously been big improvements since Katrina, but it’s also obvious they still have a lot to learn. I’m definitely no expert in the area of civil defence, but New Zealand is a world leader so you pick up stuff up and I can see a lot of mistakes. However, wherever you go, events like this bring out the best in most people; most people are good at their core.

Rep. @BetoORourke explains what it’s like to watch firsthand as Texans come together in the wake of Hurricane Harvey pic.twitter.com/tReemU6MBd

There’s always a Shakespeare quote for the situation.

The web of our life is of a mingled yarn, good and ill together: our virtues would be proud, if our faults whipt them not