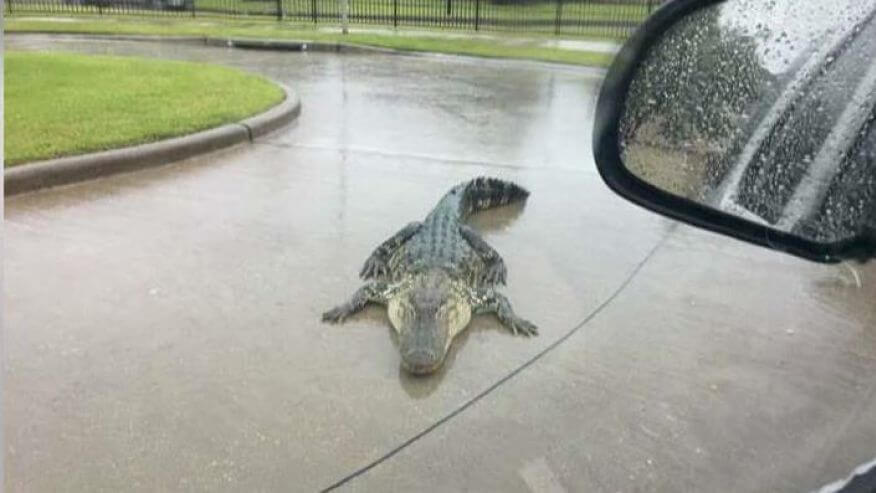 Tweets of the ongoing crisis in Texas following Hurricane Harvey is still, of course, the main thing on Twitter today. The Washington Post is so far confirming sixteen deaths as a result of the storm. One is a police officer (see below). I suspect we haven’t seen the worst of it yet.

I was living in Gisborne, NZ, when Cyclone Bola hit in 1985. It’s still the costliest cyclone in our country’s history. I recall driving in the country a few months later when something struck me – the paddocks (fields) that were now above road level used to be several metres below it. They were built up by all the papa soil that had washed down from the hills.

Anyway, bad as Cyclone Bola was, Hurricane Harvey is much worse, especially in terms of the number of people who will suffer. It took years and a lot of work and money to recover from Cyclone Bola. It will be tough for the people in southern Texas for a long time to come.

We’ll start off with the Weather Tweets today, which are all about Hurricane Harvey.

This is sad news. Sergeant Steve Perez died trying to get to work to save people. From the Washington Post:

Acevedo said Perez’s wife said she asked him not to go in because conditions were so bad, but Perez insisted “because he has that in his DNA.”

It is with a heavy heart that we announce the tragic in the line of duty death of Sergeant Steve Perez. pic.twitter.com/cHJxjnFgII

And it’s for real!

And how about this! I don’t know if it’s real or if it’s made up, but I like the pic so it’s in! I think the water in the pic might be too clean for this to be real. What do you think?
(Via Ann German.)

Believe it or not, this is a shark on the freeway in Houston, Texas. #HurricaneHarvy pic.twitter.com/ANkEiEQ3Y6

This statistic blew me away …

Interstate 10 at the Jefferson / Chambers county line. Waves with white caps on the interstate. #Harvey pic.twitter.com/GH79zIoQAk

Here’s what’s known about the potential link between climate change and hurricanes.

There are few things cuter than a kitten playing.

That’s a cat-sized hole. It looks like it was made just for the cat!

Did I just hear the tin opener? pic.twitter.com/5xq28Pczz9

At this age, their heads always looks too big for their bodies.

I think a big awwww is needed for this picture… pic.twitter.com/rCKfMXH6fj

Cats are pretty smart when it comes to we humans.

Give us a kiss !! pic.twitter.com/ec5rKfyo7y

How many can you count?

Didn’t I just say this? Kittens playing is the cutest thing in the world!

You can see it coming!
(Via Ann German.)

Out the way, she’s mine. pic.twitter.com/TtRmQ7PSDP

Dogs are a bit obsessive when it comes to their toys …

when ball is life. pic.twitter.com/NmCgU80FRt

What the eff is going on here??? No, I don’t expect you to try to count them this time!

Monkey teaches human how to use rock as a tool pic.twitter.com/KWh66Ow49P

Poor wee thing. Good on SWCC for all the work they do.

Another late night but we’re slowly getting our #hedgehogs released into wild and making space! This little one not going anywhere yet! ???? pic.twitter.com/GnpxYEDzCU

I think I’ve said before how much I like otters.

you didn’t need a video of an otter eating lettuce, but here you go pic.twitter.com/RzmW1tLUdG

This is a lucky sighting.

A rarely-seen Grizzled Skipper pupa, within a chamber of silked-together leaves of Agrimony, waiting to burst forth in spring (Pic: P.Eeles) pic.twitter.com/WuMcvdPmut

A small nettle patch in my garden has attracted both Comma and Red Admiral! No photo can do justice to this Comma pupa! (Pic: P.Eeles) pic.twitter.com/v8VGOKH08J

@ARGroupsUK @ARC_Bytes Frog watching me clear excess duckweed from allotment pond – allowed me photo close up whilst posing too.. pic.twitter.com/SKLDV7nZK9

Sea sponges are fascinating creatures, and they also have enormous potential. There is so much that we can learn from studying them.

How many of you were put off swimming in the see after seeing Jaws? I know I was.

When you’re swimming & something touches your foot. pic.twitter.com/iW8ENxzQ1S

Secretary of Defense James Mattis says the ban on trans people in the military is on hold pending further study. https://t.co/lVvXmbENq3

The mosque ceilings in the article at this link are stunning! The work that has gone into them blows the mind!

There are also some lovely old buildings here …

There are some stunning mountain vistas in Chile.

View from the mountain top in Bergen. pic.twitter.com/sv9LNnCYii

Someone always has to change the light bulbs.

I think if Shakespeare met Trump, this is what he would say.

Why, what tumultuous clamor have we here?