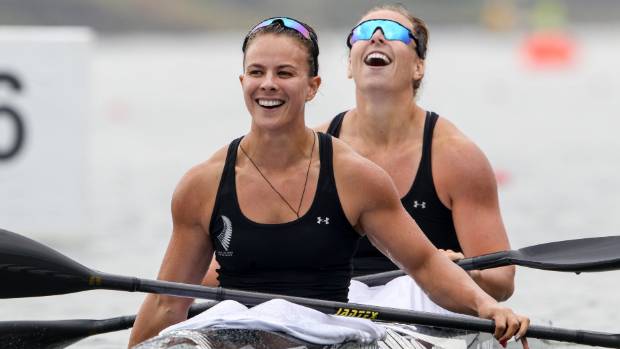 There’s a lot of suffering going on in Texas still with the ongoing heavy rain. It looks like it could be the weekend before it stops, but there will still be standing water to deal with at that point. Twitter is full of tweets of the sights, and many heroic rescues.

Kim Jong-un is acting up again – he wants the world’s attention back on him so has sent a missile east over northern Japan. His excuse is the annual South Korea/US war games. Kim insists they’re invasion practice.

In New Zealand, we’re celebrating one of our top kayakers, Lisa Carrington, who won four medals at the world champs – 2 golds, a silver, and a bronze. She won the two gold medals only an hour apart! She’s an incredible athlete, and I can’t wait to see her at the Olympic Games next year.

She’s third from the left in the tweet below. The pic was taken when she was one of the pair who won the gold medal K2 Women’s 500 metres.

Paging the Hastie family! Don’t you think this gorgeous wee thing looks like April when she was a kitten?

As you can see, I’ve found a new cat account. Every few tweets, there’s a Bible verse for good measure, which is probably why I’ve never come across it before. However, I can live with that because the pics are worth it!

There’s a bit of an attitude going on here!

Is it nap time? pic.twitter.com/MY7wRsfIYb

Now that’s a cat who’s in charge of life.

There are already lots of cat tweets today, but I had to put this one in …

If you’re happy and you know it saying, meow! pic.twitter.com/1DRKQpnxI9

Now that’s what I call a size differential!

That little guy is definitely in safe hands!https://t.co/ropDWE8L4S

This is so sad, but it has a happy ending.

a very scared abandoned dog was saved off of the streets and regained her happiness pic.twitter.com/Tl9FE2mOfn

Does anyone know what sort of lizard this is? Whatever it is, it seems to have a lot of personality. (Yes, I know that’s just me projecting my human emotions onto an animal, and that doesn’t work!)

Pandas are so cool. We had a couple visiting in NZ at Auckland Zoo about 30 years ago, and I went to see them. They were wonderful! As such a small country, I don’t think we’ll ever be able to afford to have pandas again.

We all have that one clingy friend, gotta love them ❤️ pic.twitter.com/ClfEwnKWoy

Otters are another one of my faves, and these are especially cute.

I don’t know what these are, or if they can be eaten, but I like the way they look. Sort of like a cauliflower?

Hala fruit looks like the inside of a planet https://t.co/bSxH2oe2fT

The revolting Ted Cruz is calling for federal aid for Texas. Yes, that would be the same Ted Cruz who voted against any going to New Jersey or New York when they were hit by hurricane Sandy in 2012. Rep Pete King is calling him out …

Politicians only have power as long as people vote for them. Personally, I think they should go through a proper legal process and not get rid of Trump via a Kangaroo Court. But, the GOP must start to show some integrity re Trump.
(Via Ann German.)

We have the power to get rid of Trump and force him to resign or force GOP to impreach him! #peoplepower #marchonwashington pic.twitter.com/9EYFqQg7Rs

The fake news bots are at it again!
(Via Ann German.)

Ha! Is that the president of Finland refusing to shake Trump’s hand? 🙂 (They did shake hands.) Actually, this visit is significant because Finland borders Russia but is not a member of NATO. Aligning themselves with the US by visiting sends a strong signal to Putin.
(Via Ann German.)

“My buddies in Europe warned about this” #Trump #Finland #meme pic.twitter.com/5hOfZkoxJG

This home changes with the seasons!

This is big news. Fortune magazine is reporting that the “Unite the Right” protestors were discussing using vehicles as weapons before the Charlottesville rally.
(Via Ann German.)

If I went to this place, I could just sit and watch the waterfall and the fish for ages.

So sue me! I’m a sucker for waterfalls!

Rainbow (Waiānuenue) Falls,Hawaii. It got its name because if it is sunny in the morning, you will be able to see a rainbow from the falls. pic.twitter.com/WgtgoKUwr6

An interesting tweet from Ann German showing how huge the city of Houston is. Every little thing is bigger in Texas!

Just so you have an idea how large Houston is-

You could fit Chicago, Baltimore, Detroit, & Philidelphia within it and still not cover it. pic.twitter.com/oPixWtssB9

New Zealand’s known as the country that regularly has four seasons in one day, but I get that isn’t usual. Anyway, there’re always people who have a great response, whatever the situation. (Texas usually gets around 1.3 metres/50 inches of rain annually.)

Austria used to have an empire. Now there are people in the US who don’t even know they exist.

I don’t know the Alps had moved to Australia. pic.twitter.com/pUweBie09r

There are some jobs where English is a prerequisite, and making signs is one of them …

Is that what they call their workers? pic.twitter.com/2PW6WUqrKl

I wonder if it was at this franchise?

“Name’s Bond, James Bond. And you are..?” pic.twitter.com/O1XpEowauy

Perhaps they want more business? This is what happens when you have a profit-centred health model. 🙂

And saving the best one for last!