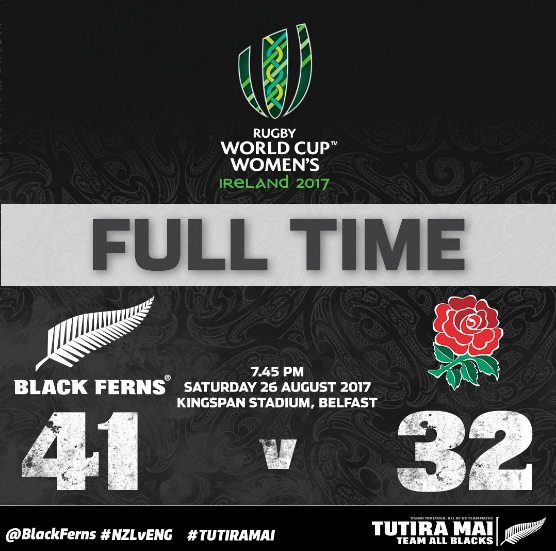 Well, rugby is trending in the Twitterverse in New Zealand for two reasons. One lot of tweets is because the All Blacks won again last night! We beat Australia 35-29, so the whole of New Zealand is in a good mood. That also means we retain the Bledisloe Cup for another year. We play two tests against Australia each year, and this year we won both, so the cup’s still ours.

Even better, in the early hours of the morning our time, our women’s rugby team, the Black Ferns, got the world championship back! Four years ago England took it off us when they won the last world cup. We met England in the final again this year, and we’re back on top!

So little old New Zealand is world champions in both men’s and women’s rugby, as well as 7s rugby (men’s seven-a-side).

REPORT: The #BlackFerns are World Champions once more after #WRWC2017 win.

This short video was made following the Black Ferns semi-final win against the USA, which gave them their place in the final against England.

“We set a goal to reach the final and I couldn’t be any prouder of the girls” – #BlackFerns captain – Fiao’o Faamausili #WRWC2017 pic.twitter.com/XkPl8fwpHI

This is from a couple of days ago, but I’ve only just found it, and I think you’ll agree it deserves inclusion!

1% of cats own 99% of best seats pic.twitter.com/VlhTzVzLAP

We all have that feeling sometimes!

I don’t wanna get up. pic.twitter.com/6Er1VWSpx6

They’re beautiful, but their eyes are just a little bit creepy!

i love these two pic.twitter.com/b1aF9b6Qco

Another bundle of sweetness.

Great prelude to the dog tweets!

That’s a big jump for a little dog! I think he’s very brave.

Here, let me show you pic.twitter.com/nLBX0CqjPR

Methinks there’s a lot of dinosaur left in the condor.

The critically endangered California condor is the largest bird in North America. pic.twitter.com/29lwyHLjfY

There’s something about baby elephants …
(Via Ann German.)

Man saves fox pup and gets a new friend pic.twitter.com/9AzdoKMEPj

Close-ups of insects and other creepy-crawlies often reveal stunning beauty.

I must make the effort to find more of these!

Of all the incredible fossils on display at the @RoyalTyrrell, this Gorgosaurus specimen is my favorite. Breathtaking pic.twitter.com/Fa2R4rI4da

Yes, God created 250,000 species of fossils in evolutionary order. Just the fool us.

I love seeing visual explanations like this. I think they’re a great way to get kids interested too.

This is how a sewing machine works! pic.twitter.com/PXItGBFPdR

I have to keep reminding myself that there’s beauty in the US too. The ugliness that comes from the White House tends to obscure that.

This is just gorgeous. You could look at this for hours and still see new things. Thinking of the work and skill that’s gone into it blows the mind. I know they don’t speak French in Austria, but the word “incroyable” always sounds right to me for places like this.

St. Charles’s Church (German- Karlskirche) is a baroque church located on the south side of Karlsplatz in Vienna, Austria. pic.twitter.com/a3myv8FYap

Wherever you go in Italy there’s something lovely to see.

There are so many amazing and unexpected things in India.

Chand Baori, a stepwell in the village Abhaneri near Jaipur, India. It has 3500 narrow steps, 13 stories. pic.twitter.com/HvKwfl6wRs

It’s great what can be done when you have a lot of people, a lot of imagination, and not much land that can be built on. It doesn’t have to be endless ugly high-rises.

I wouldn’t want to fall on that floor!

Look at the woman’s specs!

Looks like things haven’t change much since Shakespeare’s day …

This is cool!
(Via Ann German)

Tracing the origins of the limerick in Limerick. https://t.co/Ts5jdhmAJ2

A good visual explanation of hurricanes.
(Via Ann German.)

If you didn’t know the difference between hurricane categories…Harvey is a Category 4 pic.twitter.com/471emwJzOe