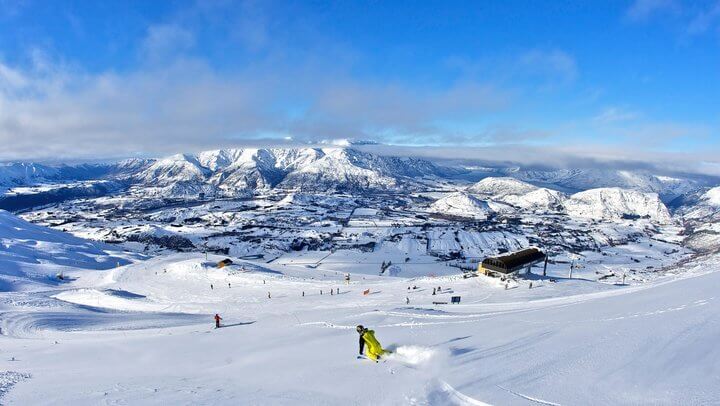 I’ve had enough of the Twitter icon being the main image of every tweets post. So, I’m going to make the effort to copy a picture from one of the day’s tweets or comment from now on. Hopefully it’ll liven things up a bit. Today’s pic is Coronet Peak, one of New Zealand’s top ski fields, where the fifth Winter Games start today.

The Winter Games is a four-yearly competition held the year before the Winter Olympics. Top athletes compete from all around the world. As well as competing many are looking for points to get into their country’s Olympic team. Being in the southern hemisphere also gives the athletes a chance to extend their season too. Around 900 are due to compete this year on the South Island’s Coronet Peak near the towns of Queenstown, Wanaka, and Naseby.

It also gives me the chance to post this video by Dawid Gajdosz, made on a three week trip around the South Island last year. The locations in the video are Fjordland National Park, Mount Cook, Arthurs Pass, Christchurch, Wanaka, Queenstown, and Franz Josef Glacier. You can see details of the filming equipment etc here.

And now, on with the show!

Their characters stay the same …

He is saying I did not do it daddy pic.twitter.com/YZDrTogjJq

Whoever owns this dog, I think I like them …

It’s Friday here already, so it’s the right time for this tweet.

Ahhh. the sweet smell of the weekend pic.twitter.com/Z13nZsNuui

The hedgehog came back!

Pretty sure this wild #hedgehog is Titch, returning to his release site to look for food! His long tail is quite distinctive! @alex_elbro pic.twitter.com/kwLsMYthbP

How’s this for cute – a hedgehog and her hoglets!

Hedgehog mom with her babies pic.twitter.com/XhzIZ7EiA0

Is that polar bear cub doing the macarena?

I remember this! It was so cool!

Miss Piggy and Kermit visiting Mark Hamill and Yoda on set of Empire Strikes Back. pic.twitter.com/VbJYNZH4tL

And we can’t have Australia and not New Zealand, so here goes …

This kind of discussion is set to become more frequent in the weeks and months ahead.

No, I’m not advocating assassination!!! However, it did make me laugh …

So far, HUD Secretary Ben Carson has filled 4 of 10 regional administrator jobs. Who got those four jobs?

I don’t know whether to take this idiot seriously, but it’s scary all the same …

I’ve heard this sentiment often – I’ve even said it myself. But, it’s the first time I’ve seen it done with a pic.
(Via Ann German.)

Just one of the millions of reasons to make sure Nazis and people like them never get a foothold in society again.

A doctor suggested to my grandmother that she take up smoking in the 1940s. He thought it would help her relax. She was giving birth every 18 months or so until she had seven children. She was looking after two other children and feeding all the farm workers too. My grandfather was too old to go to war but as well as his own farm he was looking after the farms of his two brothers-in-law. And there was no petrol.

Everyone who was old enough remembers July 1969. I was only five years old, but I remember it.

25 August 2012. Neil Armstrong died (aged 82). He was the first human to walk on the Moon. pic.twitter.com/WKtNGVaFNI

The eclipse tweets keep on coming!
(Via Ann German.)

And I’ve left the best one for last. This guy is amazing. I wish the video was longer as I could keep watching for ages.