The high pressure system is still in place so it’s another glorious day at my place! We’ve had a great week so far. At the moment I’m expecting it to start raining again on the weekend. I always feel guilty when that happens – a fine week followed by a wet weekend – because I got to enjoy the sun and the workers didn’t. It’s why I’m more likely to write at the weekend, no matter how I’m feeling.

I started watching Donald Trump’s rally in Phoenix yesterday, and I couldn’t believe what I was hearing. I suppose by now it should be par for the course. But he continues to shock me with his rhetoric. CNN said it was a “77-minute presidential therapy session” and though I didn’t watch all of it, that’s true of what I saw.

One of the worst things was his floating the idea that he’s going to pardon former Sheriff Joe Arpaio. I think talking about it to his base is Trump’s idea of a focus group. If they like it, which they did, he’s likely to go ahead with it. He doesn’t care what the rest of the country thinks. When he’s gone from this job, a quarter of the country is tens of millions of people he can extort money from via Trump TV.

Also, whether he sees it or not, admits it or not, it’s another nod to the white supremacists he insists he doesn’t support. Arpaio’s policies in relation to Mexicans in particular was widely seen as racist, but Trump says he was “just doing his job.” It’s also a kick in the teeth for the legal system. Arpaio’s conviction is for criminal contempt, but Trump is saying that’s okay.

All leaders have to grow into the job, and this is a much tougher job than most. However, I despair of Trump ever making it. He doesn’t have even the basic skills needed. He says he will bring his country together. However, in many ways he’s made deeper the rifts that were already there. He has shown no indication that he’s got what it takes. 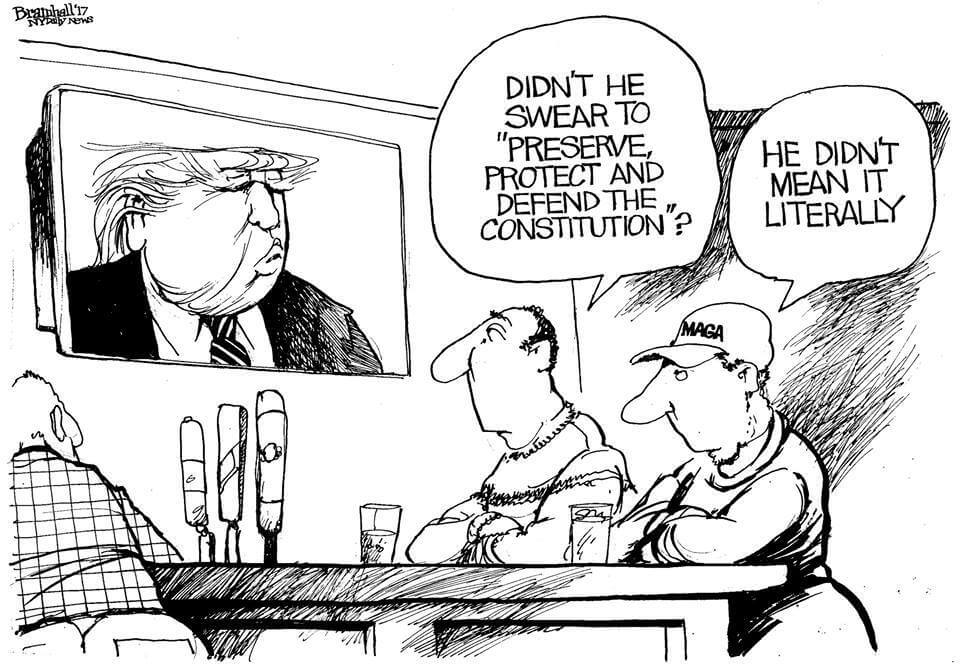 If it strokes me, I’ll be its friend …

it was a forbidden love pic.twitter.com/5sTkIxMdfi

‘I can do the same as mommy’ pic.twitter.com/f8d8NiSYln

Now that’s a cat showing what’s on its mind …

‘Out of the way losers!’ pic.twitter.com/pk9n4IeBbG

I hate to think what happened here …

This is pretty cool. There are no cats who have this honour, but my guess is they don’t care!
(Via Ann German.)

today’s the Feast of St.Guinefort: a greyhound who saved a baby from a snake, was martyred & became a saint. let us honor this very good boy pic.twitter.com/haI4VPgrpL

‘You seriously expect me to believe that?’ pic.twitter.com/2ANhFI1GvD

This is the hilarious moment a curious pufferfish managed to photo bomb an unsuspecting diver. pic.twitter.com/MJjKNxZ7yw

I love red pandas. I am not a cuddly toy person, but I have one of a red panda cub from Auckland Zoo, Amber, from several years ago.

The lovely island of Mykonos.

Morocco is stunning too …

On 23 August 1305 Sir William Wallace was hung, drawn and quartered. I saw the movie, and although it was a fairly good movie, the inaccuracies in the history drove me nuts, so I’ve never watched it again.

#WilliamWallace memorial in Smithfield #London where he was executed for treason #OTD 1305 https://t.co/7qqaC041tP #Scotland pic.twitter.com/hcBQPamzIj

Legend says on 22 August 565 A.D. Saint Columba banished a sea monster to the depths of Loch Ness in Scotland. pic.twitter.com/28PxgFWMfU

I’m not sure how they know it’s the oldest, but for you soccer fans, the world’s oldest football has a new display at The Stirling Smith museum in Scotland.

The World’s Oldest #Football has a new display, where you can learn more about the #history of the game in #Scotland https://t.co/3S1yKowbmk pic.twitter.com/LrOSPoo91I

It’s not just in the US that Trump’s reputation is going down.
(Via Ann German.)

I want this t-shirt!
(Via Ann German.)

I’ve had it with trump AND his supporters pic.twitter.com/e0Kfe4KP8s

How’s this for a stage for a play? What’s the bet the play’s about religion?

Fascinating theater stage for a play in Bregenz, Austria pic.twitter.com/DucgpRQbi8

Best photo-bomb ever! I thought the video of the eclipse from a plane window I put up yesterday was pretty good, but this is even better!
(Via Ann German.)

Don’t blame me, blame Ann German. Okay, so it made me burst out laughing, but who wouldn’t?

Using a robot to feed a baby. pic.twitter.com/nZ3ZQQjjA9

We have Oreos in NZ, but they’re not a big thing. I think I’ve only eaten a couple in my life, and I can’t remember whether I liked them. I understand that those of you who are USians have a bit of a relationship with these biscuits though. Or should I be calling them cookies?
(Via Ann German.)

#SoOnceUponATime there was a temple where we could worship Oreos with no judgement. pic.twitter.com/l73I8ujZzL

Good on this brave woman!

Perhaps dancing in the middle of the road isn’t the best idea, but to arrest a 14 year old boy for having fun is why Saudi Arabia needs to take a good hard look at itself.

This 14 yo boy was arrested in Saudi Arabia for inappropriate conduct – doing the Macarena! https://t.co/N4M1Nr3rDg