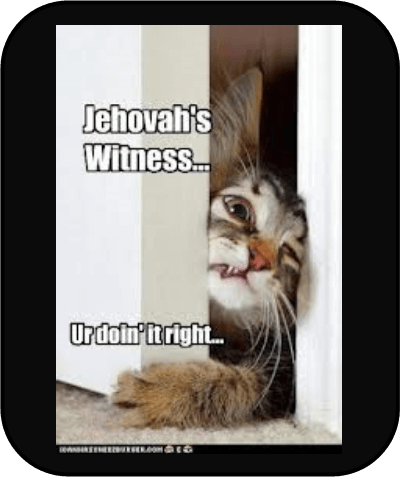 As an atheist, I don’t have much time for religion. There are, of course, many believers who are important people in my life. I even have a god-daughter – despite my atheism her parents consider me to be a person who can be a good example to her. That doesn’t stop me posting multiple tweets attacking religion. It’s the institutions and its leaders I have a problem with. However, I see all people as individuals and a belief in a higher power is not something that’s going to turn me against anyone.

In Russia, that’s no longer the case. I wrote recently of the dominance of the Orthodox Church there. It’s pretty insidious in my opinion. Now, being a Jehovah’s Witness has been made illegal there. In April, the Supreme Court banned them, listing them as an extremist group alongside terrorist groups. That meant all 396 registered churches in the country had to disband. This week they appealed the ruling and they will hear within three months whether their appeal is successful. I don’t hold out much hope for them.

Religious freedom, including the freedom not to believe, is one of the marks of a civilized country. Yet again, Putin’s rule is taking his country backwards in his attempts to be a bastion of Western morality.

Jerry Coyne has pinched a few of my tweets for his site (which is fine of course), but today I’m going to pinch a couple of his from this post. I thought this one was apropos because of today’s homily.

The Creation of Cat Man pic.twitter.com/ffy3lY65D5

Another cat doing its best to fit into a box!
(Via Ann German.)

rt if you think this cat is doing an amazing job pic.twitter.com/byNWuLi5si

It’s always weird to me that other countries call these “kiwis”. In New Zealand, we call them kiwifruit, and when I was a kid, they were Chinese gooseberries. The name change was a marketing ploy. It worked – New Zealand kiwifruit farmers became very wealthy, very quickly. Oh, and the kitten is cute too!

Service dogs all over the world do a wonderful job.
(Via Ann German.)

Watch #ServiceDog Coach pass the bone to Earl in this tail of workforce transformation. Retweet if you love dogs! #NationalServiceDogMonth pic.twitter.com/5ROFqDAb6j

If there’s any country that would try to drive away wild animals with demonic robot wolves, it’s Japan. pic.twitter.com/1z19oRv7Y8

This is the other tweet from WEIT. (Jerry wonders if the rest of us know what the US means by “nut sack.” Yes, Jerry, we do!)

My hedgehog had babies last night & they are about the cutest lil nutsacks I’ve ever seen ???? pic.twitter.com/Fr2FAugutq

Photo by Philippe Lacroix The bird in the mirror ~ Northern Flicker Quebec,Canada pic.twitter.com/Ia58HGBccD

I think Hillary Clinton is great. She’s one of the people I admire most in the world. I understand that a lot of people don’t feel that way, but it also annoys me the way many in her own party are turning on her now. She would have been a great president. Even if you don’t like her, you should at least be able to agree that she would be significantly better than the incompetent buffoon that currently occupies the Oval Office. I think that’s why so many Democrats have such a hard time dealing with the election result – it’s not so much losing, it’s who they lost to. It doesn’t help either that she got millions more votes than her unqualified opponent.

This is what Hillary Clinton still means to so many Americans pic.twitter.com/7W4H1ktEK3

Ann German found a tweet of her latest book. I really want to read it. I don’t know if it’s available here, but if not there’s always Amazon of course.

I’m only a few pages in, and I’m loving the shade. She managed to subtly mock Priebus and Chaffetz without breaking a sweat.#WhatHappened pic.twitter.com/1LzvOS6myy

This is hilarious!
(Via Ann German.)

I have no sympathy whatsoever for the revolting Ted Cruz. Here’s a great tweet on the latest episode. (What’s the bet Cruz, learning from Trump, engineered the whole thing to get back in the news.)
(Via Ann German.)

Here’s another good one.
(Via Ann German.)

And I love this one. (Obviously, since I tweeted it myself!)

In case you don’t know what’s going on with the Ted Cruz thing, see this:

This is very cool! I did a couple of papers on the Vikings when I did my degree, and there are indeed sagas of warrior women. It’s great to have a find confirming they’re real.

This is beautiful, but it would be a nightmare to keep clean!

The thread this tweet is the beginning of shows a whole series of war rugs made in Afghanistan and some of the story behind them. It’s fascinating.
(Via Ann German.)