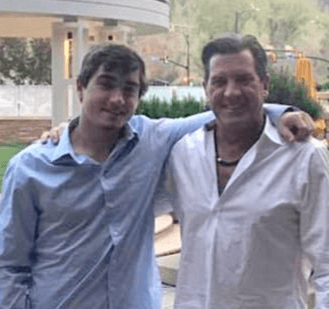 Today’s comment was going to be about some New Zealand athletes who have done great things over the last few days. Instead, I will find some tweets to celebrate their achievements and put them below.

The reason for that is I’ve just found out that Eric Bolling’s son, Eric Chase Bolling, who was only nineteen, died on Friday night. The working theory is that his death was suicide as the result of a drug overdose. (Remember Sunday was World Suicide Prevention Day.)

For those who don’t know Eric Bolling, he’s a 54-year-old former Fox News and Fox Business anchor. He joined the network in 2008, and was rising quickly through the ranks. He left the network recently following accusations of sexual harassment from female co-workers and guests. He’s denying the accusations, which seem to be credible, and suing the HuffPost reporter, Yashar Ali, who first made them public. His son, a student at the University of Colorado in Boulder, was reportedly having a hard time dealing with the fallout from the situation.

I came across Bolling because I used to be a regular viewer of ‘The Five’, which was a show he co-hosted for several years every weekday with four others until earlier this year. I never had much time for his views – he was a Trump devotee and apologist. However, it was actually him leaving ‘The Five’ that was the reason I stopped watching it. Or rather, it was the identity of his replacement. Whatever else he was, Bolling was honest in his beliefs. His replacement, Jesse Watters, was quite happy to lie frequently and regularly in support of the Republican cause.

The devotion of Bolling to his only child, Eric Chase, was clear to anyone who saw him talking about his son. At each milestone and achievement in his son’s life, Bolling would post share pictures on ‘The Five’ and various social media of the occasion. He was clearly bursting with love and pride for his son. I can’t even imagine what he and his wife must be going through as a result of his death.

One of the things I think about with being outspoken online is that having no one in my life means there’s no one that can get a hard time because of my actions or opinions. That’s something most people have to consider, and it may be that Bolling will have to live with the fact that his actions may have made a contribution to the death of his beloved son. Bolling is a devout Roman Catholic, so if his son committed suicide, that will make his loss doubly difficult. Whatever you think of what he allegedly did, the death of a child is too high a price to pay.

Adrienne and I are devastated by the loss of our beloved son Eric Chase last night. Details still unclear. Thoughts, prayers appreciated.

Authorities have informed us there is no sign of self harm at this point. Autopsy will be next week. Please respect our grieving period.

We are overwhelmed by the love and support we have received. Adrienne and I thank you all and ask that you please keep us in your prayers.

I got this ad on my Facebook wall today. What will they think of next!

Methinks that sometimes domestic cats get the sitting in safe spaces thing a bit wrong!

if I kinda of fits, I sits. pic.twitter.com/0M4XQJZem1

This cat know how to set itself up with a flattering background.

This is what cats are for!

Actually, I don’t think the dog is really very happy about this. He’s putting up with it for the sake of his human and because he’s well trained.

Wow, The Dog Doesn’t Mind It At All! 😀 pic.twitter.com/HNsZFvnzlv

I’ve heard that a lot of people are leaving their animals behind as they escape Hurricane Irma and even worse, leaving them tied up, which horrifies me. What are these people thinking? Here’s someone rescuing at least some of the dogs. Good man!
(Via Ann German.)

Couldn’t of asked for a tougher days racing, down to the wire @bhoffmanracing #santacruz703 pic.twitter.com/e0dUgivT82

Here are the top three on the podium.

Mo Farah wins the #GreatNorthRun in 60:06 from Jake Robertson and Feyisa Lilesa pic.twitter.com/211ewPuhT8

BUT he was the winner in another way. At the finish line he asked his girlfriend and fellow athlete Magdalyne Masai to marry him, and she said YES! Masai came fourth in the women’s event.

????????’s Jake Robertson proposed to ????????’s Magdalene Masai after he finished second at the #GreatNorthRun.#seanknows pic.twitter.com/2O5DGa3e3v

As president, Trump has been given a role to perform, and had speeches written for him, on the anniversary of the tragedy of 9/11. Here he is before others were telling him how to behave.

Reminder: Donald Trump responded to #September11th by bragging about the size of a building he owned pic.twitter.com/7FfeKPML0v

It turns out power points on the trees wasn’t a stupid idea after all! (I always thought it was a good idea. ???? )
(Via Ann German.)

How these trees became charging stations for cell phones after Hurricane Irma. via @MiamiHerald https://t.co/VFQLDtofmY

I’m not sure calling on Russian authorities to stop the attacks will help much. They’re probably the ones calling for the attempts on this journalist’s life.
(Via Ann German.)

Sarah Silverman has lost the plot a bit recently, but she’s right on the money with this tweet.
(Via Ann German.)

I guess they really wanted some of that Western decadence!

Opening of the first McDonald’s in the Soviet Union, Moscow, 1991. pic.twitter.com/0X0fwZj5ic

Girl at a Rolling Stones concert in 1969. pic.twitter.com/rMo3cCiBQm

What would you do? Unless I’d had previous instructions to not do anything if anyone fainted because help would come, I wouldn’t stay standing to attention.

What the tweeter said!
(Via Ann German.)

Eye caught by background character in a 1786 print. Am clinging to the hope there was a man walking around Georgian London looking like this pic.twitter.com/Yc9g1lKCcF

I wish this was longer – I’d like to see more before and after pics. It’s so cool! It (almost) makes me want to bake some bread myself. Then I remember what hard work it is, especially since I don’t have a breadmaker.

I could watch this for HOURS. pic.twitter.com/B6egsr4Yow

I love these videos of dominoes falling!

This is Absolutely Insane!! pic.twitter.com/7JzuFN0xAp

It looks so simple, but how many of us could get it right?
(Via Ann German.)

This guy is an actual magician pic.twitter.com/TO7s6mbeP8