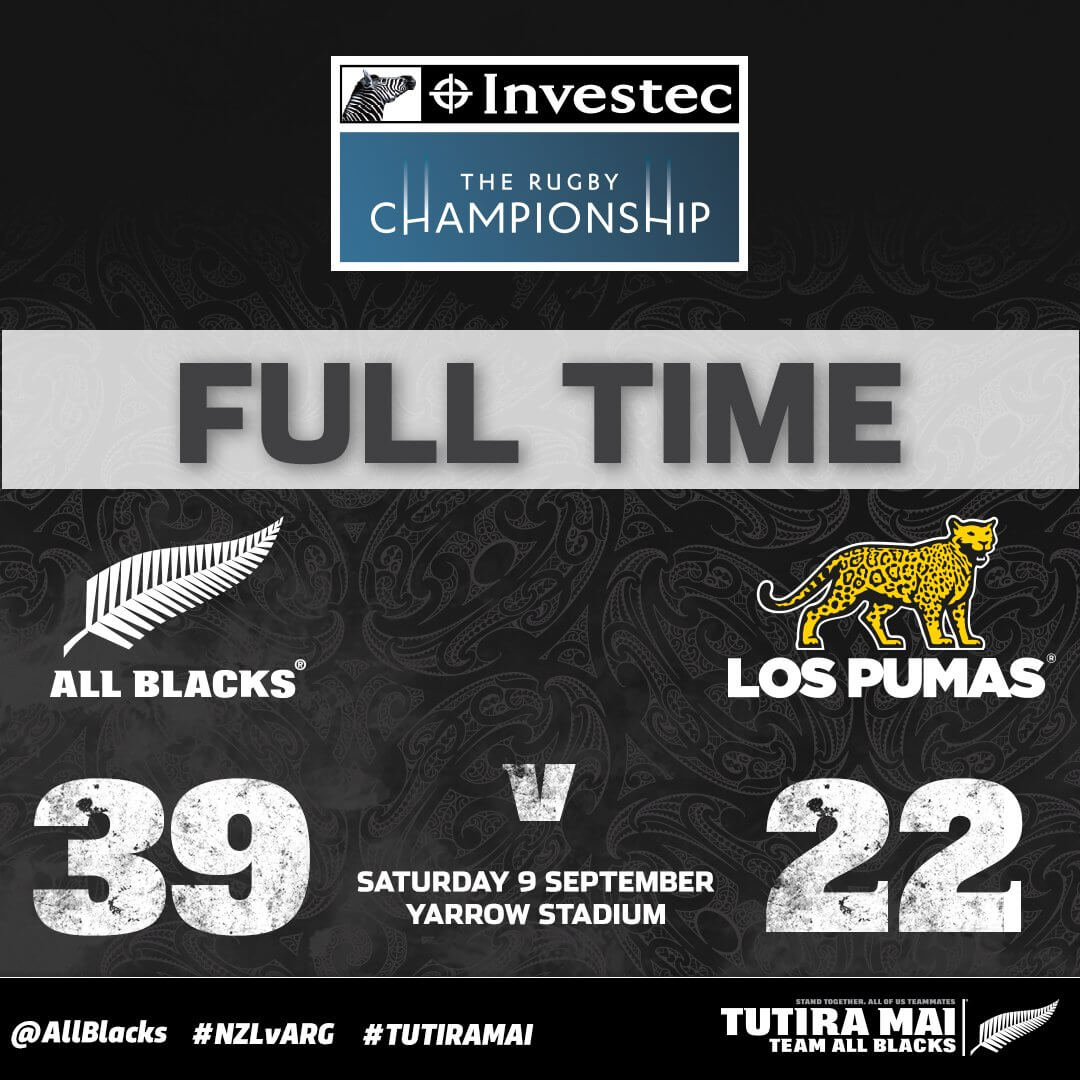 In New Zealand it’s tweets about a certain rugby game that are trending on Twitter at the moment, and if you’re a rugby fan, things are looking pretty good right now. The All Blacks met the Pumas (Argentina) last night and after a hard fought match, we won 39-22. Los Pumas fought hard and played well, and at half-time they were deservedly ahead 16-15. Shortly after half-time they’d increased their lead to 22-15.

The All Blacks try below, ten minutes into the second half, marks a turn around. The All Blacks began to play much better after that and came away with a good win in the end. There are quite a few nasty tweets from Australians about the Pumas giving us a fright. I guess they still haven’t got over us beating them twice in a row.

Last night’s game was part of a four-way championship involving Argentina, Australia, South Africa, and New Zealand. Australia and South Africa played last night too; the result was a 23-all draw. That means Australia has yet to win a game in the tournament, which explains a lot of the sour grapes. Like there often is with neighbouring countries, there’s a bit of a love-hate relationship between us.

Back row Vaea Fifita scored a try for the All Blacks this morning that’s got everybody talking.

I don’t have a section for this tweet, so I’ll put it up top. I did the test and got Iceland. For some reason it got the impression I like cold places! It’s the cold that would put me off that country, as well as that fish delicacy thing (the name of which escapes me at the moment). I want to live right by the beach somewhere where there’s plenty of sunshine! I’d love to visit Iceland though.

What Country in the World Best Fits Your Personality? https://t.co/U0oeFz9OKf

You may have seen this very cool tweet that’s been doing the rounds over the last few months.

the most normal thing in 2017 so far pic.twitter.com/X05h6nQFrG

Well, this cat can do a high-five and a high-ten!
(Via Ann German.)

There’s something about a sleeping cat.

How lucky is the person who saw this live and got to film it? Seeing this sort of thing must be the thrill of a lifetime.

This fox family will melt your heart pic.twitter.com/QYbJfUr2st

These foxes clearly have no trouble finding food. I suspect human intervention!

I didn’t know this lovely species of fox existed before. Yay for Twitter!

I always knew there was a bunny conspiracy! Here’s the proof!

It’s a secret bunny meeting. What are they talking about pic.twitter.com/7kVBrsu2eE

Okay, this is not normal!

I’ve done this to a piglet too – they seem to love having a good ole belly rub!

“She fell over making that face the moment I started rubbing her belly…” pic.twitter.com/CTN95kyoo3

This could also go in the Weather Tweets section.
(Via Ann German.)

These photos of snails are absolutely gorgeous!!!

Couple Spends 26 Years Replanting a Rainforest, Here’s What It Looks Like Today https://t.co/YAYU0ivNdW

This would be pretty freaky if you didn’t know what was going on. If I saw it in New Zealand, I’d suspect imminent volcanic activity.

The forest floor is breathing! pic.twitter.com/YHzpz5BTZc

This is both genius and absolutely hilarious!

I love this photo! It would be a good one to use for a caption competition too!

Here’s one for parents. Don’t worry. As long as you taught them good values, they’ll turn out okay. They grow out of the weird stuff.

Photographer Tracks Down People He Snapped In His Hometown Almost 40 Years Ago To Recreate The Remarkable Images https://t.co/P1j0WquVGV

Another lovely pic of Italy – they just keep on coming!

He’s lucky the consequences weren’t much worse! People like this take resources away from helping others.
(Via Ann German.)

I caught a spectator getting taken out by a huge wave on a Key West livestream and gif’d it #hurricaneirma2017 #HurricaineIrma pic.twitter.com/2omIvz8P0M

Strictly, this is a Climate Change Tweet, but it fits in here too.

The Bard has words for the occasion …

I have seen tempests when the scolding winds
Have riv’d the knotty oaks, and I have seen
Th’ ambitious ocean swell, and rage, and foam