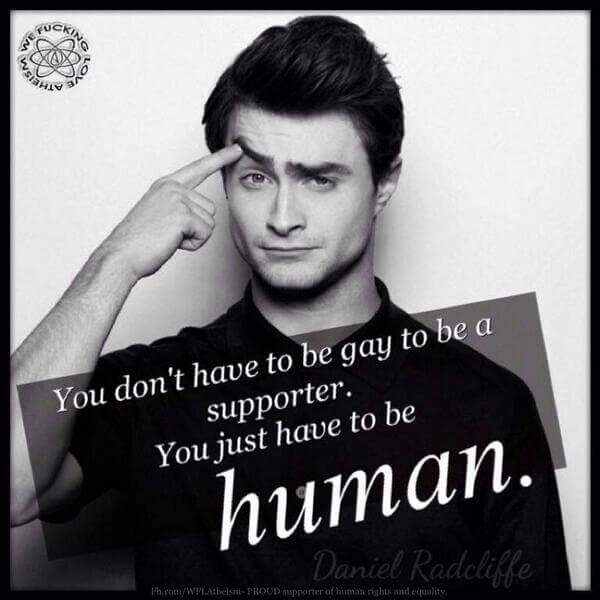 Australia is finally having a referendum on same-sex marriage. I haven’t got any tweets on it, but I want to mention it all the same.

Polls show that a majority of Australians favour marriage equality, but getting it into law has been difficult. Since New Zealand legalized same-sex marriage four years ago, roughly a third of licences issued have been to Australians getting married here. It’s a postal vote, which often means a low turnout, and is not binding on the government. Hopefully though, support will be so strong that opponents will no longer be able to deny that this is what most Aussies want. Then, making it law can’t be too far behind.

In the lead up to the vote, there is a very ugly “No” campaign by the “Coalition for Marriage”. They have made an ad for TV that includes some ridiculous statements, and some claims being widely labeled as lies. For example, one of the messages of the add is, “In countries with gay marriage, parents have lost their rights to choose.” It doesn’t actually say what rights they have lost. As is usual in such ads, scare tactics are being used to try and frighten people into voting “No”. I don’t think it will work.

One of the “stars” of the ad that is screening on TV there has links to gay conversion therapy according to Pink News. The “Yes” campaign has just come out with an ad of their own in the last few hours to counter the claims in the “No” ad.

A lot of cats seem to find bathroom sinks in the summer time. You can understand why of course.

Countryside is the best pic.twitter.com/48bmGSr7lp

What a nice thing to find in your jeans!

Your jeans are the comfiest! pic.twitter.com/VtF6kPXB2V

Learning that leaping thing that cats do …

Here’s another cat professor! I wonder it it’s a colleague of PCC(E)?

Dr. Whiskers at your service pic.twitter.com/JPc5szRbF4

How can people do things like this? It literally sickens me. ????

After Being Shot In The Head With An Arrow, This Dog Wandered The Streets For Days Looking For Help https://t.co/EP4XQhYCyj

I bet this cat is planning some pay-back …
(Via Ann German.)

This dog and cat as a metaphor for my current workload. I am the cat. pic.twitter.com/Rt8h2LUdRF

What a cool pic!

I feel sorry for the dog! I hope he got his hug later!

No hugs for dog pic.twitter.com/2Eesn9reUU

Lots of great pics here, and the kid is cute too.

Okay, so some Aussies are cute.

But otters are cuter!
(Via Ann German.)

I didn’t know about this!

The Phenomenon Of “Crown Shyness” Where Trees Avoid Touching https://t.co/x8rYvYXuBn

It appears that Trump may not have the ability to pardon Paul Manafort according to the Washington Post.

In the event Manafort or anyone else is charged under New York law, or threatened with indictment, there will be nothing Trump can do about it.

His “power to grant reprieves and pardons” only covers “offenses against the United States,” according to Article II, Section 2 of the Constitution.

So much for strategic use of pardon power with Manafort!https://t.co/qk5GG17Rej

He doesn’t care about the workers who gave him their votes, and he doesn’t understand economics.

Another reason we need time machines.

The way to get this look is to paint the wall a different color every 10 or 20 years, starting in the 1700s. pic.twitter.com/F8ufUS0woq

This beautiful staircase is ruined by the belief of the Catholic faithful that it was built by St Joseph, the patron saint of carpenters, and stands due to supernatural intervention. (There’s a video at the link.)

The Miracle Stairs Of Loretto Are Shrouded In The Most Amazing Unsolved Mysteries Even Today! Click>> —-> ->>
> https://t.co/FeMfnPJt9O pic.twitter.com/71r50z7np9

Japan is another country full of lovely places to see.

The colour of that water is so lovely.

Look at those hips go!

More than 7,000 pieces! They know what sort of fans to appeal to in order to get them to spend the money – the ones my age who grew up with the original movie and now have spare money. Well, some of us do. There’s another Lego set I want even more which is only about half that price, and I can’t afford it either. 🙁

The Millennium Falcon has come a long way for a hunk of junk… pic.twitter.com/B6AzrToGYi

Fire devils – a phenomenon that science has taken put of the realm of the supernatural.

Fire devils are a rare phenomenon in which fires, combined with certain air temperatures & currents,form a ‘tornado’ that rises into the air pic.twitter.com/4Rlwi24x2W

When you make lemonade out of the most bitter lemons pic.twitter.com/rM14vg6tY3

There’s another one on the way – Hurricane Irma. The southern US could be looking at even more major flooding in the next few days. This time Florida will likely get most of the rain.