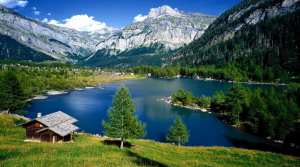 If you’ve never been to Switzerland, the typical images that come to mind are a chalets nestled in beautiful mountain passes, green meadows with Julie Andrews doing her thing, ski fields, and beautiful lakes. Whatever the image, the sky is invariably blue and clear, and the sun is shining.

Martin Heck (Timestorm Films) has produced a time lapse film of the clouds in the Swiss Alps; the clear blue skies are gone and in their place is a series of incredibly dramatic skyscapes. (I think I just invented a new word – I got a wobbly red line!) Oh, and look out for the duck. Ducks are cool. 🙂

Timestorm Films first released this film back in 2012. It was shot entirely in RAW and processed and edited in 4K (whatever that means). For those that understand this stuff, here’s the list of gear used:

The soundtrack is by Max Richter: Last Days from the album memoryhouse.