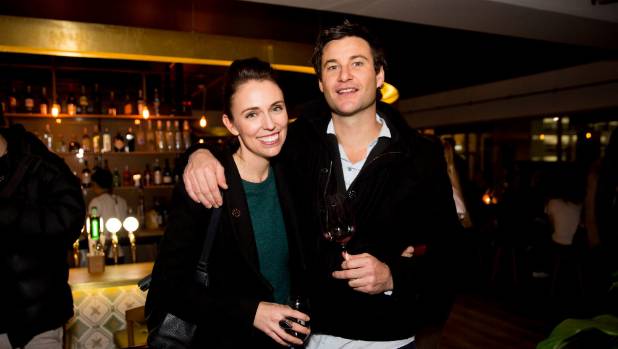 First off I must apologise. (Yes, that’s how we spell it in New Zealand.) I’ve been neglecting my website for a couple of weeks. There has been writing going on, but none of it made it here. Two posts are progressing slowly, and one may actually see the light of day. (Not every post I write makes it to the website; I often decide they’re just not good enough.) I’ve also been doing some other writing when the inspiration strikes me, and it struck during the last few days. So, I thought I should do a tweets post to prove I still exist.

One of the big items of news in New Zealand is that our prime minister, Jacinda Ardern, is due to have a baby on 17 June. Ardern will be only the second leader of a modern country to give birth while in office. The first was back on 25 January 1990 when the prime minister of Pakistan, Benazir Bhutto, gave birth to her daughter Bakhtawar. Circumstances will be a bit different for Ardern then they were for Bhutto though.

Her plan is to keep working until she goes into labour, then take six weeks off. Her partner (no they’re not married!), Clarke Gayford, will then stay at home to look after the baby and she will return to work. Gayford is both the brains behind, and the front-man for, fishing show Fish of the Day, which screens in twenty countries. It won a Gold award at the Houston International Film Festival. 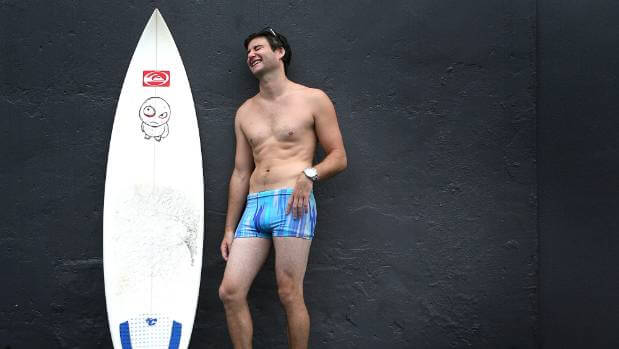 Gayford grew up near Gisborne, just like me! As well as being a keen fisherman, he also loves to surf. stuff.co.nz reports that by the age of ten, he knew the English, Maori, and Latin names of most fish that swim in New Zealand waters. He’s a graduate of the NZ Broadcasting School, and worked in radio before moving to television.

After six weeks, Ardern will return to work, juggling work and motherhood in the same way that most women do these days. She’s told media that she has “no real plan” in place for how to cope after the baby is born. Basically, like most first time parents, Ardern and Gayford will be working it out as they go. There are currently two MPs who are also breastfeeding mothers in parliament. They often have their babies with them, and even feed them in the House when their duties require them to be there when they need to be fed. 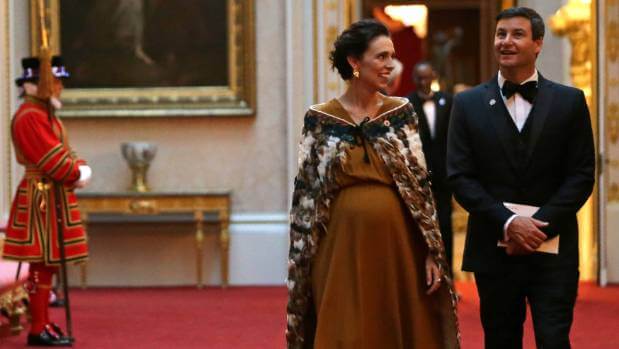 Jacinda Ardern and Clarke Gayford in their way to an official dinner at Buckingham Palace as part of the Commonwealth Heads of Government meeting (CHOGM). Ardern is wearing a traditional Maori korowai (cloak). (Photo credit: Getty Images via stuff.co.nz. Click pic to go to source.)

Ardern is doing a good job of staying down to earth despite the expectations many are placing upon her to become a role model for all working women. Her pregnancy is progressing well, and she’s healthy. There were no problems getting the clearances she needed for her recent long haul flights to Britain and Europe where she did a good job of representing our country. At a joint press conference, German Chancellor Angela Merkel even said to the New Zealand press, “… you can be proud of your prime minister.” (Ha! We’re one up on you US!)

This is a much more serious issue, and should be what this post is about, but I’d already written it before I found out.

The US is at war with Syria. Trump does not appear to have said anything.
(Via Ann German.)

The US-led coalition bombed the Syrian government and Iranian-backed militias today. This is a big deal.

I spoke to several sources today who were there or connected to people there. Here is what happened:

In retaliation the US-led coalition bombed the pro-regime militias AND regime targets, winning the villages back (and securing oil resources) for the SDF.

This is much more significant than the spectacle a couple weeks ago of the US bombing empty buildings. Today, the US and its allies fought the regime over *territory* and killing many. This is a sign of a much more entrenched war than the US has been letting on.

It’s also significant because the US is ostensibly in northern Syria to fight ISIS, but it’s now actively engaging Iranian-backed militias and the Syrian government.

The complete lack of American media attention on today’s clash between the US and Assad’s forces is yet another example of how thoroughly Trump sets the media agenda in America. Trump hasn’t said anything about this bombing, so it isn’t news.

Have you got that USians? You are at war with Syria. You are no longer just fighting in Syria. What Trump has done by authorizing today’s attacks means war!

And in news from across the Atlantic pond … (I have to say, this doesn’t surprise me either.)
(Via Ann German.)

Good. This was an absolute disgrace!

Brave young women in Iran making a point – wearing the hijab should not be compulsory.

In parts of Cape Town, apartheid is still very much alive. pic.twitter.com/MFWPZWuRYw

I was on a roll yesterday:

The Gospel according to #Trump and the #Evangelicals… pic.twitter.com/1KLCjlxkil

The History of #Coal … pic.twitter.com/aS8ZoGIcqZ

What if #ClimateChange is a hoax? (It’s not.) pic.twitter.com/Nw8phkmLjE

Lydia Ko is back!

Rudolph Hoss before being hanged on the grounds of Auschwitz pic.twitter.com/kkgMpXVJbN

This is better, but WTF are “Tables for Ladies.”

Who saw the White House Correspondents Dinner?
(Via Ann German.)

Trump didn’t like what she had to say of course …

The White House Correspondents’ Dinner was a failure last year, but this year was an embarrassment to everyone associated with it. The filthy “comedian” totally bombed (couldn’t even deliver her lines-much like the Seth Meyers weak performance). Put Dinner to rest, or start over!

This is what Betty Bowers had to say to that …

Oh, @realDonaldTrump . . . the White House Correspondents’ Dinner will ALWAYS be funny, with or without someone telling jokes, because the funniest part is aways you being so afraid to show up, you thin-skinned baby. https://t.co/HNqQzyrUBg

Un-effing-believable! Jason Miller, almost Trump’s press secretary, currently spokesperson for Trump on CNN, believes the moon landing was faked. He came to believe this following his time on the Ted Cruz campaign team. I can’t believe this is real, but it’s coming from Slate, who are usually reliable.
(Via Ann German.)

Quiz: Do you eat like a Republican or a Democrat? https://t.co/r5CQwU3GZt

Didn’t see that coming did you?

How cute is this?! These are supposedly the ones Jesus rode. How do they know? They have a cross on their backs. It wasn’t there before. Because that’s how evolution happens.

Wow! Crows are so smart!

Apples, t-shirts and Sirocco: the latest #kakaporecovery newsletter is out. Find out what we’ve been up to, and what’s next. #kakapo #conservation https://t.co/Dlnoi24sVF pic.twitter.com/MuQwmz0HPE

This will forever be the best video on the internet ???????? pic.twitter.com/2rgsZgwvk3

This is why these are my favourite dogs …

Almost as cute as a cat.

that’s a cuddle puddle I want to be apart of.

Just do what Mum does and you’ll be fine!

This one has been around for a while, but I love it, so it’s going in …

nice to meet you.
MOL 😉 pic.twitter.com/EnpVSj9kPx