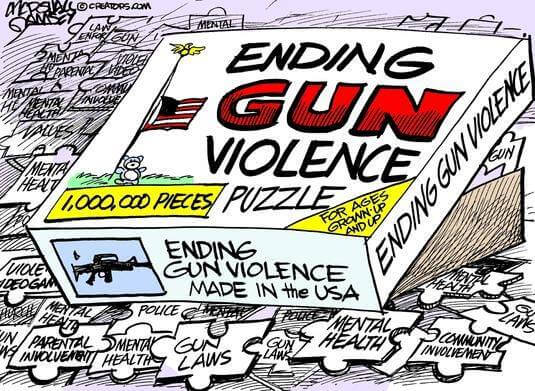 I was tweeting a bit a couple of days ago, especially about one of my pet topics – gun safety in the US. As a result I felt the need to do a short post to include a few of those tweets. You’ll have to excuse my solipsism here – there are quite a few of my own tweets in this post.

As I said in my last post, the New Zealand Police have killed less than fifty people in the last century. It seems that all (as far as I can find out) had weapons, though not all those weapons were firearms. One controversial case a few years ago I particularly remember the young man had a machete, for example.

With that number of deaths, which I’m sure readers in the US will consider very low, many New Zealanders are still complaining that some police officers are acting like Rambo. That’s because they’re not comparing our Police with US Police, but with British Police. Our rate of police shootings is about the same as that in Great Britain despite the huge difference in population. (New Zealand has about 4.5 million people, Great Britain has about 65 million.)

Of course, not all New Zealanders are critical of the Police. Plenty are neutral, and we have our own revolting characters too. We had a police shooting just a couple of days ago. The head of the right-wing Sensible Sentencing Trust, Garth McVicar had this to say on Twitter:

One less to clog the prisons!
Congratulations to the New Zealand Police, our thoughts are with the officer who was forced to take this action to protect the public. https://t.co/4A8T4jIlVa

Really? “One less to clog the prisons!” and, “Congratulations …”? I already had a pretty low opinion of McVicar before this. He thinks hard labour is a good idea, for example, and that prisons should be harsher. But tweeting a congratulatory message for killing someone? How low can you go?

I have every sympathy for the officer who felt the need to take this action. Killing someone must be an extremely difficult thing to deal with, whatever the circumstances. Our police are pretty well trained and undergo personality tests before being accepted for training to try to weed out those who are likely to show poor judgement. That’s no guarantee against them getting it wrong, but it does make it more likely that they can reasonably justify their actions in controversial situations.

And the killing is being independently investigated. The officer can’t, for example, just say that he felt threatened and get away with what he did. That is not a justification.

One big problem though is that our police still aren’t wearing body cameras. All sorts of people are wearing body cameras here. In some cities, even the parking wardens have them. Ambulance officers routinely wear them too. All prison officers wear them, and reports are that they have significantly reduced violence both against officers and in general.

I can see no good reason for our police to continue to avoid the wearing of body cameras. Assuming they are acting fairly and recounting events honestly, which I think most of them do, body cameras can only help them. There have been calls for our police to wear body cameras for some time, and they get louder with each police shooting. It’s time they heeded the call.

I endorse this completely.
(Via Ann German.)

John Bolton can not be trusted to be NS advisor w/o a full investigation of all of these.pic.twitter.com/Y3tzarJm0G

I just have this to add …

WATCH: Stormy Daniels and her lawyer’s strategy to hold the limelight has a familiar sound to it… #MTPDaily pic.twitter.com/yKXKUJyI6M

Oh dear! I didn’t retweet this, but I felt the urge to use it somewhere all the same.
(Via Ann German.)

A responsibility of leadership: providing an example for kids.

Teaching in the US today … pic.twitter.com/mUtlfQIJcc

I can see a need for this section coming. I’ve felt that the rule of law is under threat in the US for some time, and that feeling keeps getting stronger. A Trump presidency makes the threat much worse, and the longer he is around the greater the threat. Extreme partisanship leads to both sides doing things they wouldn’t normally consider, but I see the far right as more dangerous as they have the greater proportion of authoritarians.
(Via Ann German.)

Trump’s growing increasingly dangerous to US all

He tweeted: “THE SECOND AMENDMENT WILL NEVER BE REPEALED!.. We need more Republicans in 2018 and must ALWAYS hold the Supreme Court!”

Hold it? As in supreme ruler?

And this isn’t front page news?https://t.co/Mv1st6rLma

Well, this one was pretty popular …

It’s amazing how the change in topic can change the approach.

What do you think of this dude’s sign! I love it, of course.

One of my regular arguments on why background checks will work.

No guns in heaven. pic.twitter.com/JrzyRjCeF6

A visual comparison between school shootings and politicians.

This is very cool.
(Via Ann German.)

Denmark -which enriched itself in the slave trade – unveils statue to the black rebel queen who burned St. Croix plantations https://t.co/cdf4hfonIs

Yet another cruel prejudice. I didn’t know there were people being killed and maimed for their body parts because of this superstition. I thought I couldn’t be surprised by the level of ignorance that still exists, but I am. The good news is some people are trying to do something about it.

The Miss Albino contest in Zimbabwe is helping to tackle a major stigma. pic.twitter.com/69SmaUP6Hs

Let’s collectively get rid of compulsory hijab by #WalkingUnveiled in public. Togeder we are stronger

If you’re looking for blog recommendations, Egberto Willies is one I’d give a strong endorsement. He’s an atheist, but a religious background means he can put out pieces like this too.

Who Are You Listening To? An admonition to Evangelicals! https://t.co/dGKzEs79y2 via @egbertowillies

Wow. Just wow. Hanging his hatred out there for all to see. And it’s amazing how many have “bravely” felt able to crawl out from under their rocks since Trump became president.
(Via Ann German.)

Hate to break it to Prog Mormon twitter but Elder Ulisses Soares is white. As is half of Brazil. Latin/Hispanic doesn’t equal brown. Elder Gong is from a northern hemisphere high IQ population as well. So we’re still 100% free of global south phenotypes #ThankGod #LDSConf pic.twitter.com/E8jc4V6hsC

Fool me once: Old Testament

Moses was technically the first person to download files to his tablet from the cloud.

What religion has done to the women of Afghanistan. Also notice the gloves – it probably means she has painted nails. Any type of glorification of the hands must also be hidden from other men in the strictest interpretation of the Qur’an.

One more for the science nerds: pic.twitter.com/II5rHsOwGt

WTF is Wrong With the World? Tweets

One of the responses it got …
(Via Ann German.)

This is brilliant. (Pinched from WEIT)

I’m surprised no one did this before!
(Via Ann German.)

My favorite word in the English language is “Amen” because when I hear it I know you’re finally done asking Me for stupid shit.

I know people who can (and do) do this!
(Via Ann German.)

I wish I could do this.. pic.twitter.com/Lm02p07kgV

This has to be one of the best hedgehog tweets ever!

Preserving The White Rhino:
with and at Longleat #Nature #Science
–https://t.co/O1bQSPsn0s

There’s something about cats and kittens.

That kid’s getting a good start in life!

I’d shut the bedroom door tonight if I were you! That cat’s getting you back!

This cat just saw his first optical illusion and he CANNOT ???? pic.twitter.com/MrSuTBQOrr