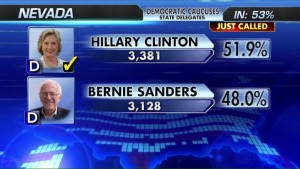 The Democrats were caucusing in Nevada today (Saturday US time). Hillary Clinton won the state back in 2008, and it looks like she’s done it again. Before even half of the vote was counted, pundits were calling the election for Clinton. At that stage, the gap between her and Bernie Sanders was only about 3 points, but as more votes are counted, it appears to be increasing slightly.

A few months ago, the Clinton lead in Nevada was more than twenty points, and Sanders spent big (perhaps twice as much as Clinton) to try and win the state. It was always likely that he would win New Hampshire, as he did last week, and a second win before heading to South Carolina and the other southern states where Clinton has an advantage may have persuaded voters to give him a second look. However, despite impressive gains, he didn’t quite make it.

Nevada, of course, is the state of former senate leader Harry Reid. Although he has not declared for Clinton, it is clear where his sympathies lie. He reportedly called up union leaders in the Las Vegas area to get them to turn out for the caucuses there and support Clinton. More than seventy percent of the caucus votes are from the county in which Las Vegas is located, and Clinton looks like she will win there by around ten percent.

It was also Harry Reid who forced the change in the Democratic primary calendar so that the Nevada primary would be before the South Carolina one. The Republican party have a primary in South Carolina today, but the Democratic Party don’t have their South Carolina Primary until next week. South Carolina is likely to favour Clinton as it traditionally favours more establishment-type candidates. Also, it has a very high military and ex-military population, and Clinton is seen as being more sympathetic towards those demographics than Sanders.

One thing that must concern the Clinton camp though is that in exit polls (conducted by Fox News) those who consider “honesty and trustworthiness” the most important attribute of a candidate, Sanders wins 84% to 11%. Also, Sanders appears to have slightly won the Hispanic vote. Clinton’s strongest supporters were older voters.

The Democratic Party allocates its delegates proportionately, so Sanders will collect plenty of delegates tonight and has plenty of incentive to stay in the race for a while yet. There is no doubt though that tonight’s loss will be a big disappointment for him.