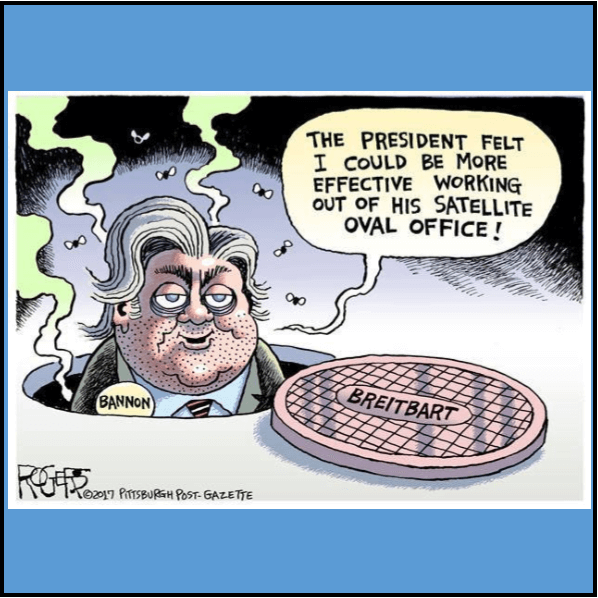 The CBS ’60 Minutes’ interview with Steve Bannon finally came to NZ on Sunday night. A few anti-Bannon tweets made it into the local Twittersphere as a result. As with the Evangelical nationalists, he’s another where it’s scary he’s so close to the president of the most powerful country in the world.

He’s clearly an intelligent man, but his logic circuits need some major re-wiring. There were several things in the interview that made no sense to me at all.

For a start, he made much of growing up in a desegregated neighbourhood and going to a desegregated school to prove his lack of racism. I would have thought that as a child those things were his parents’ decision, not his. Further, his parents may not have had a choice and were resentful of the situation. That could have had a great influence on a child. In fact, at 63 years of age, why is he still going on about going to a desegregated school? Is that a normal thing to think about in the US? Perhaps the fact that we’ve never had such schools influences me, but it was a surprise to me he would even mention it.

Another aspect of his logic I couldn’t get my head around was what he said about Trump’s White House. On the one hand he had a lot of praise for the fact that there were “divergent views’. He thought that it was healthy for the president to hear lots of different opinions. I agree with him there. A president must have people around him who will disagree and give him alternatives. However, Bannon also insists that those who aren’t on board with the president’s point of view should leave his employ. You can’t have it both ways.

However, there are two errors here. Firstly, the US did not elect Trump, their Electoral College did. The US people gave the majority of their votes to Hillary Clinton. Secondly, even if you accept that the US did vote for Trump, that assumes that all those who gave their vote to Trump want economic nationalism. That’s patently absurd. Many Republicans gave their vote to Trump simply because he was the Republican candidate, including McConnell and Ryan. It was that, or vote for Clinton.

The Republicans have actually always been the party of free trade in the US. I would guess that at least half of that party still supports free trade. Certainly influential conservative think tanks like the Heritage Foundation do. The last two GOP presidential candidates, Mitt Romney and John McCain, who still command a great deal of respect and support, trumpet a free trade message too.

Bannon is out of the White House but is now back as editor of Breitbart News. That gives him a lot of influence on the right, but I don’t think it will last. I think USians as a whole are rejecting extremes and the centre is coming back into its own. Bannon has a voice at the moment, but I think the majority of his country reject his ideas. Further, given the way the Mueller investigation looks to be going, his patron is unlikely to last beyond one term.

Cats just aren’t what they used to be!
(Via Ann German.)

Not too sure about the name, but he’s lovely.

Giving a new home to an animal that’s been abandoned is a wonderful thing to do.

“The day after I adopted her. Can’t stop hugging” pic.twitter.com/WVos3etMNJ

Dog Adopts A Baby Fox After His Mom Died In A Car Accident https://t.co/IWaT6AhUuM

Cotton the hedgehog is making a nest to keep warm for winter!

Cotton has 9 more days in her pre-release pen. She’s been busy dragging leaves into her house to make her nest cosy! #wildlife #charity ???? pic.twitter.com/GGT3YPHz4E

Not sure I’d be putting my hand anywhere near a hippo’s mouth, but I suppose they’ve been training her since birth!
(Via Ann German.)

Fiona showing off her dental development! She enjoys the dental check and mouth massage, so it’s easy for care staff to assess growth. pic.twitter.com/H7mgAivyoE

In case you were wondering …

One of the things on my bucket list is to see a sea turtle in the wild. I think they’re so cool. It looks like the chances of that happening just got better, which is fantastic news!

Scientists discovered that sea ???? populations are actually on the rise! That’s cause for shell-ibration.???? pic.twitter.com/QouJy3UYyR

I would love to do this too. I used to SCUBA-dive in my late teens and early twenties, so I know what to do.
(Via Ann German.)

Syria and Russia are getting away with this sort of thing every day. Russia isn’t just doing it in Syria either.

The moral of the story …

Another excellent educational video which explains why scientists want to use the ALMA telescope.

This robot was designed to walk like a human pic.twitter.com/mNoIkJkmDl

Scientists are nerds. That’s probably why I like them.

I wonder if Steve Bannon’s wife ever used this excuse? (He’s a Catholic.)

In France a couple of FEMEN protestors stormed the stage to oppose the message from a couple of imams. Naturally they were removed. Perfectly understandable, especially given that FEMEN the protestors were topless, as they usually are. What’s not acceptable is that the men who took them from the stage can be seen beating and kicking the women!!! (See the story here which I found out via Tweeter Archie Debunker.)

I often imagine what my life would be like if I was a US citizen instead of a NZ one. Among other things, I wouldn’t be doing this website. My computer and some other equipment I need to do it came from our Accident Compensation Corporation to enable me to have a better life. I couldn’t do it without them because I couldn’t afford it.

It must be so scary for these people (below) wondering what’s going to happen to them under a Republican government. The hearing room is extremely small for such an important hearing, and there should be more room for people with disabilities who are naturally going to have a strong interest.

Having said that, they do need to be quiet during the hearing. However, as their needs haven’t been considered when they need to be part of the hearing, I can understand why they are making such a noise.

Activists with disabilities protested the GOP health care bill. Our government responded by dragging them out of their wheelchairs. pic.twitter.com/36zvAsU0nE

I understand that Senators McCain and Collins have both said they will vote “No” now, so hopefully this won’t go ahead.

Senator Graham and Senator Cassidy are hoping their #GrahamCassidyBill will pass to repeal and replace the ACA. pic.twitter.com/u6RgWHd6JC

Check out this Iranian man showing his support for the White Wednesday campaign to overturn the compulsory hijab law. He is wearing a hijab, but his wife and daughter aren’t!

For those of you who don’t already know this.

As a non-USian, I know very little about Le Bron James. This is enough to convince me he’s one of the great and the good.

Whether or not you agree with these sportspeople protesting by kneeling (I do), you should support their right to peaceful protest in a free country. As employees of a private organization, their employers have the right to stop them, but as they are choosing not to do that, there should be no opposition to what they are doing.

This congressman stood up for the athletes across the country who knelt down pic.twitter.com/9XXbvCyj33

Members of the military in democracies fight to retain the freedom of a democracy.

This WWII took a knee in solidarity with the NFL’s player protests pic.twitter.com/hZ05MvpeRu

It’s good that President Trump has declared Puerto Rico a disaster area, which I assume allows extra aid. However, he’s not talking about it like he did about those states that gave him their vote. He’s too busy tweeting about the #TakeTheKnee campaign.

Puerto Ricans are American citizens — so why isn’t the U.S. doing more to help in the aftermath of Hurricane Maria? pic.twitter.com/EMbjt5cDTq