More Mass Murder of Children in the US (plus Tweets)

Seventeen children are dead in Florida and Trump tweets that it’s the FBI’s fault because they were too busy trying to find evidence he was colluding with Russia during the election campaign. WTF is wrong with this man?

He went to Florida and met with the families of two of the victims for 35 minutes. Then he had a photo op with some of the first responders (which took longer), then he went to play golf at Mar-a-lago. Maybe no one else wanted to meet him and he was doing the right thing by not subjecting any others to his presence. If no one else wanted a presidential visit, it’s no surprise.

Every time someone suggests something that could help, opponents say that it wouldn’t stop ALL shootings and therefore it’s a waste of time.

For goodness sake! NOTHING will stop ALL shootings, but if it stops even one child from being murdered, surely that’s good?

There are things that are legal in the US in relation to guns that boggle the minds of those of us in the rest of the world. Rules vary state by state, but some examples are:

Most of us blame the prevalence of guns in the US for the problem of gun deaths there. But, it’s not the only issue. The other is the intersection of money and politics. To run for office, especially state or national office, it takes huge amounts of money and politicians want all they can get. The NRA and other gun rights groups spend a lot of money supporting politicians. If politicians don’t vote the way those groups want, they lose a lot of financial support.

In New Zealand, one of the biggest sponsors of sports at all levels used to be tobacco companies. When that was made illegal, the government created a fund called SmokeFree. One of the things it did in the first few years while sporting organisations were searching for new sources of sponsorship was to financially support those who lost tobacco company money.

Perhaps gun safety groups could consider doing something like that. They could donate to political campaigns that refused to accept money from gun rights groups. At the same time, they could rate politicians in the same way that gun rights groups do now, except that the ratings would be for promoting gun safety.

Thoughts and prayers don’t cut it. It’s action that’s required, and it’s time politicians did something about the number of people dying unnecessarily in their country because a few people imagine the government is coming to get them one day. 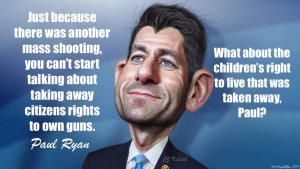 I’m putting these two tweets first because the issue is too important, and I don’t want anyone to miss them. They could also be in the Human Rights or Religious Tweets sections of course.
(Via Ann German.)

World Health Organization: “If a boy or man underwent the same level of mutilation as young women undergoing the most common form of FGM, he would have the head of his penis, and around a third of the shaft removed.” #End FGM https://t.co/Dyfek Vh5Ur

Imagine if 6000 boys every day were having “the head of the penis, and around a third of the shaft removed.” Every day, 6000 boys. There would be wars, invasions. Actually, the world would just stop and end it immediately. #End FGM https://t.co/WlMB pIjTlw

Yes, I know it’s an exaggeration, but I think it’s funny!

The #GOP Tax Scam – the reason for the hypocrisy … pic.twitter.com/CdmkarZD6X

There are a lot of details to look out for in this cartoon by Michael D’Antuono.

USA under the #Trump regime. pic.twitter.com/Dr2W7RMrMJ

A few facts on the situation of the US Embassy in London.

I guess they’re the “right sort of people?”
(Via Ann German.)

“Here are Melania’s Parents. Viktor and Amalija Knavs. They live in the United States Permanently now because of Chain Migration after Melania’s Visa Expired & she stayed here Illegally and married Donnie for Citizenship. None of them have a degree or a job”. pic.twitter.com/0FHTOqj81V

Jacob Zuma has resigned as president of South Africa. His approval rating was at an all time low (25%, and that was last year), and commentators say it’s only the historic popularity of the ANC that keeps it from dropping further. Onward and upwards South Africa with Cyril Ramaphosa!

#ZumaResigns and it’s about time! He’s done enormous damage to #SouthAfrica as he enriches himself and destroys lives. pic.twitter.com/Es3Yrp7iKS

Although I’m not yet convinced that Trump personally colluded with the Russians, I do think others, lead by Paul Manafort, did. This may uncover that.
(Via Ann German.)

It’s called “gaslighting” and I’m glad Trump’s latest attempt at it is being exposed.
(Via Ann German.)

Trump: I Never Said Russia Did Not Meddle In Our Election. Reality: Your Pants Are On Fire https://t.co/w8PhStMpeC

Today was a colossal victory. Think about it: The troll farm indictments successfully goaded Trump and Fox News into admitting the social media prong of the Russian attack actually happened in support of Trump. Acknowledging the attack = a giant hurdle cleared. Done. Suckers.

Another brave woman in Iran. The government has miscalculated. The arrest of the girl waving her white hijab in the air has encouraged and inspired other women. They created a martyr.

I am Nargess Hosseini I am Shima Babaei they are in prison , so on behalf of them I brake compulsory hijab laws. This my civil disobedience #WhiteWednesdays
من #نرگس_حسینی هستم من #شیما_بابایی هستم، به جاي آنها من قانون حجاب را مي شكنم. #نه_به_حجاب_اجبارى #چهارشنبه_های_سفید pic.twitter.com/yrq47Cfjj8

The attitude of the men in the Trump Administration towards the issue of spousal abuse is appalling. Here are some tweets I posted about the issue:

Why won’t #Trump criticize the #WhiteHouseWifeBeaters, or express any sympathy for the women? … pic.twitter.com/87qC9napSe

Record numbers of women are seeking help from Emily’s List in their bid for political office.

Record numbers of women are seeking political office! The US is currently 95th in the world in terms of the political equality of women. That will change next election! pic.twitter.com/11ihl4MLXC

I’ve posted this before, but it’s so cool, here we go again …
(Via Ann German.)

Student Emma Gonzalez said in her speech something I’ve said over and over again when I’ve written about this issue:

… this is not just a mental health issue. He would not have harmed that many students with a knife!

No kidding! (See my tweet below)
(Via Ann German.)

Evidence collected over many years, obtained from many locations, indicates that the power of Prayer is insufficient to stop bullets from killing school children.

Unbelievable! I suggested in a tweet to Ann German that those opposing better gun safety measures might start calling Parkland a false flag operation. If it happened, I certainly didn’t expect it to be this quickly, but she found this!

Time to reprise this Mike Lukovich cartoon from 2012.

I wonder if there will be any changes to gun safety laws following the Florida tragedy? #StupidQuestion pic.twitter.com/rYTBUdUDdu

The original idea of the 2nd Amendment was that there would be no standing army and citizens would provide that function. Given that a large proportion of gun owners want their guns because they imagine they’ll be useful when the liberals in government move against them, I suspect they’re not interested in fighting for them.

When are politicians and SCOTUS that it’s the 2006 interpretation of the 2nd Amendment that’s the problem. pic.twitter.com/0RqEAEKhfk

Note that this was Re-tweeted 90 times, faved 70 times, and responded to 1.3 thousand times. I suspect most of the responses were similar to what I think: Un-effing-believable! And on the day of the Florida murders too!
(Via Ann German.)

As an avid sportsman, I’m excited to announce our first AR-15 Giveaway! You can earn multiple entries and no purchase is necessary to win! Enter today: https://t.co/YH6i CluNTz #KS02 #ksleg #2a #Gun Giveaway pic.twitter.com/qpYTp Puk4Y

Even worse, kids as young as seven are selling tickets in the raffle! This is absolutely appalling! I don’t get how this disgraceful situation can even be legal. SMH
(Via Ann German.)

Children helping to give away AR15 rifles as a contest prize, even though they’re increasingly likely to be killed in school by a psychopath with an AR15.https://t.co/6D9m7 KKooo

Why don’t the #Evangelicals ever consider this might be the reality of #Trump ? pic.twitter.com/LTqCn NyslG

There’s been a change in the destination of those taken in the #Rapture since their overwhelming #Hypocrisy in supporting #Trump … pic.twitter.com/i3N2C aifAt

I posted this last time there was a school shooting, and I’ll post it next time too …

I posted this last time there was a school shooting, and I’ll post it next time too … pic.twitter.com/gibn 9S9Xbu

Let’s get on to some less serious stuff. Most of you have probably already seen this. I know I have. (The first time was on Fox News!!!) But it never gets old …
(Via Ann German.)

All this stuff came up long after the day was over in New Zealand, but some are still nice to see. This one actually looks like the pic was taken in New Zealand. I even feel like I recognize the background (Mt Pirongia from the south-east – almost). There was a rumour the Obamas were coming here. Perhaps it’s true?

How cool is this! Another one for the bucket list …

There’s a peculiar lake in Portugal, with a hole that looks like a portal to another dimension https://t.co/UxaeS vS7e1 pic.twitter.com/7jVJ9PPzUR

Wow! Amazing! Beautiful! What do you need a god for when there are things like this in the real world?

An excellent chart about Aussie spiders …
(Via Ann German.)

I never tire of the baby elephants tweets.

So now you know!
(Via Jerry Coyne.)

As @CharlesPPierce pointed out when he shared this tweet, “We all need emergency wombats.”
(Via Ann German.)

Fatigued by the news again? Here are some emergency wombats. pic.twitter.com/mKqIt ykD4V

This is a wonderful story! Rescues are always cool, especially when there’s a parent and child involved.

This duck mom got so nervous when this guy started rescuing her baby — but the moment she trusted him is amazing ????❤❤❤ pic.twitter.com/kUQWD crtAZ

Time to check the kakapo on the predator-free island of Whenua Hou again!

Our rangers will be doing #kakapo cloacitis checks on Whenua Hou next week. Last year we checked all ~70 on island; this year just 9 with recent cases – including Sinbad. #conservation #disease pic.twitter.com/hvHfo wHh9U

Awww! And so well behaved!

You can train a cat after all!

I wouldn’t mind finding these cuties in my jeans!

This rescue cat is super protective of her toys and acts like a tough guy, but she’s hardly the craziest cat in her family ???????????? pic.twitter.com/YVw q07cyCb

Don’t stop until the right number of kisses are given!

Did you ever see anything so gorgeous!!!

You get tired. You stop.

These snow leopard cubs are both cute AND gorgeous!
(Via Ann German.)