Trying to Make the Hijab a Feminist Statement

Many of you will have read Jerry Coyne’s post at Why Evolution is True yesterday: ‘Hijab hijinks at Harvard‘.

It refers to an article in the Harvard Gazette, ‘Islamic studies scholar addresses myths and mores behind the veil‘. That article is about a talk by academic and Muslin, Celine Ibrahim.

As described by Jerry, and I have to agree, it’s another move in the constant attempt by some in Islam to try and convince the West that their religion does not oppress women.

In her talk Ms Ibrahim complained about the perception of her religion in the West. She talks of the 2011 Pew Research Center study that found “… a median of 58 percent [of respondents] across four Western European countries, the U.S., and Russia, called Muslims ‘fanatical’.”

Again I agree with Jerry that “fanatical” is an unfair characterization to apply to all Muslims. I feel Ms Ibrahim is quite justified in complaining about that. “Fanatical” applies only to a small percentage of Muslims, as it does to most religions.

She goes on to make some other claims that I find more problematic though. She talks of the widely held perception that Islam oppresses women. From the Harvard Gazette:

Not so, says Islamic studies scholar Celene Ibrahim … In fact, she says, Islam is an “equal-opportunity religion,” whose principles “affirm women’s pursuit of knowledge and literacy; affirm women’s inheritance, earning and managing of wealth; and affirm women’s spiritual potential.”

It’s true that the Qur’an encourages the pursuit of knowledge in both men and women. However, it doesn’t seem to be a part of the Qur’an that Muslims have always taken a lot of notice of, especially when it comes to women. Muslim countries have made big strides in education in recent years, but they are still amongst the most uneducated on the planet. That is especially true of Muslim women. The Pew report ‘Religion and Education Around the World‘ released last week provides this summary of those with no formal education by religion (page 14): 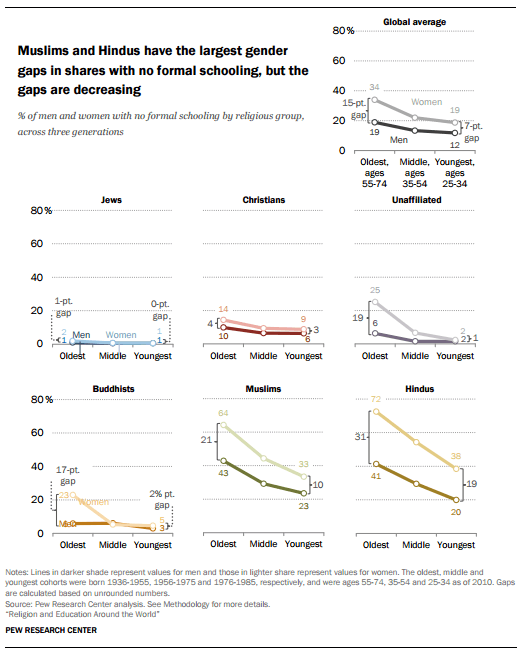 It is no longer typical in the OECD for men to be better educated than women. In New Zealand, even amongst the older generation (55-64 years) women are significantly more likely to hold a degree. (39% of women compared to 31% of men; OECD average is 23% of women and 25% of men in the same age group.)

Pew reports that Christians, Jews, and the unaffiliated have seen this same worldwide reversal in gender gaps. In those three groups, women are now, on average, better educated than men. 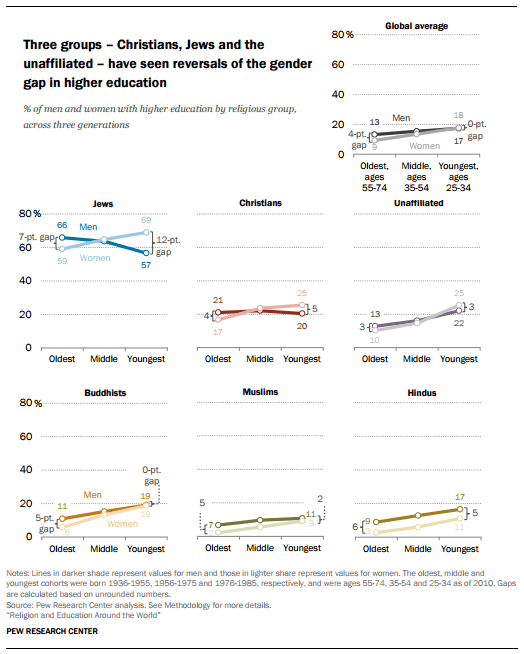 Muslims are better educated when they are the minority

Ms Ibrahim herself is clearly extremely impressive, but she is not typical of Muslim women around the world. Majority Muslim countries do not educate their people well. They do far better when they are a religious minority and their religion has little or no effect on their level of education. 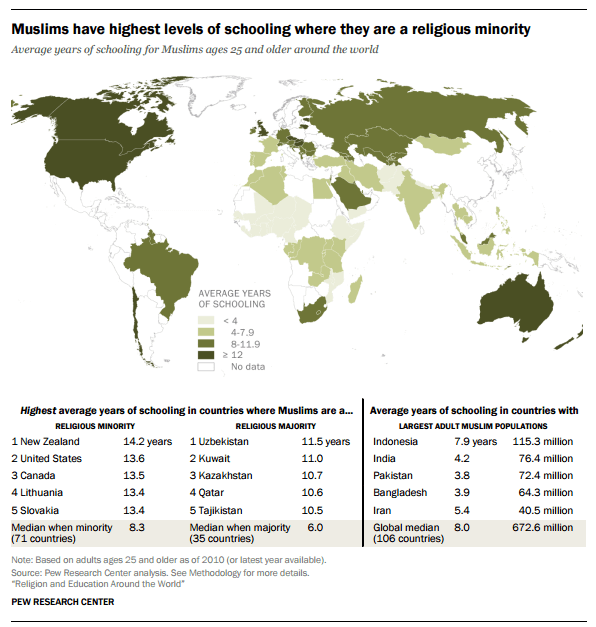 The map above shows that Muslims have the highest level of education in countries where their religion is irrelevant. Their best option is New Zealand (14.2 years) where there is not a single Muslim religious school in the whole country.

Ms Ibrahim accurately quotes the Qur’an on education. However, the religion of Islam has different rules for women and men. Traditionally that has meant women suffer in the sphere of education.

Back to Ms Ibrahim’s talk. As I noted above and according to the Harvard Gazette, Ms Ibrahim stated Islam is an “equal-opportunity religion,” whose principles “affirm women’s … inheritance …”.

Well yes, Islam does affirm women’s inheritance. It mandates that women should inherit a lesser share than men. What the Qur’an says on inheritance is:

Allah instructs you concerning your children: for the male, what is equal to the share of two females. But if there are [only] daughters, two or more, for them is two thirds of one’s estate. And if there is only one, for her is half. And for one’s parents, to each one of them is a sixth of his estate if he left children. But if he had no children and the parents [alone] inherit from him, then for his mother is one third. And if he had brothers [or sisters], for his mother is a sixth, after any bequest he [may have] made or debt. Your parents or your children – you know not which of them are nearest to you in benefit. [These shares are] an obligation [imposed] by Allah . Indeed, Allah is ever Knowing and Wise. (Surah 4:11, Sahih International)

I don’t know about you, but I am unable to square that with the phrase, “equal-opportunity religion.” There’re more rules relating to other situations too. I’m not too sure about Allah being “… ever Knowing and Wise,” either as the proportions don’t add up.

The same sentence in Ms Ibrahim’s talk that extolled Islamic inheritance laws included praise of “women’s … earning and managing of wealth.” Again, women have control of money they earn. However, especially in Muslim majority countries, they often have to have a man’s permission to earn that wealth in the first place. In Saudi Arabia the International Labor Organization reports that only 18.6% of the workforce is made up of women.

In 2006, the Saudi Minister of Labour, Dr Ghazi Al-Qusaibi stated:

The [Labour] Ministry is not acting to [promote] women’s employment since the best place for a woman to serve is in her own home. … therefore no woman will be employed without the explicit consent of her guardian. We will also make sure that the [woman’s] job will not interfere with her work at home with her family, or with her eternal duty of raising her children.

The idea that a woman’s “eternal duty” is “raising her children” is one that comes from the Qur’an. Of course, Muslim women who live in countries that have been more influenced by the Enlightenment have more choices. That has little to do with Islam. Muslims who live in the West have the opportunity to reinterpret their scriptures in the same way Christians have. That is why they experience a greater level of equality. It has nothing to do with Islam or any other religion. 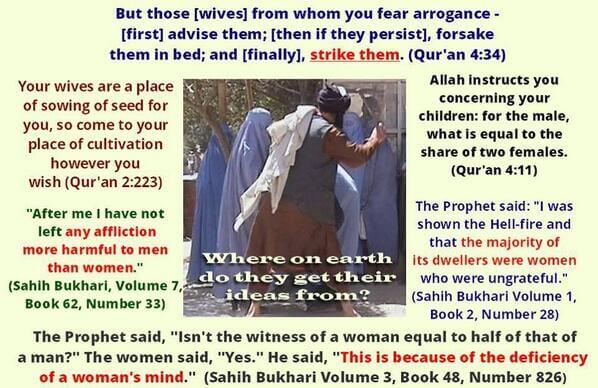 I found Ms Ibrahim’s comments on this topic astounding. The Harvard Gazette reports:

Ibrahim talked at length about the symbolic, religious, and practical purposes of the hijab, the headscarf worn by many, but not all, Muslim women. The headscarf is a symbol that has a certain power, she said.

“Wearing the headscarf is a matter of feminism, aesthetics, and solidarity for me,” she wrote in a New York Times op-ed piece earlier this year. “The hijab is fun and dignifying … it’s part of my morning routine.”

Non-Muslim women who want to show support sometimes participate in the annual Feb. 1 Hijab Solidarity Day, but Ibrahim cautioned that some people believe that may hurt women who wear them every day of the year.

“Some say that only perpetuates the sexist dogma of conservative clerics,” she said. 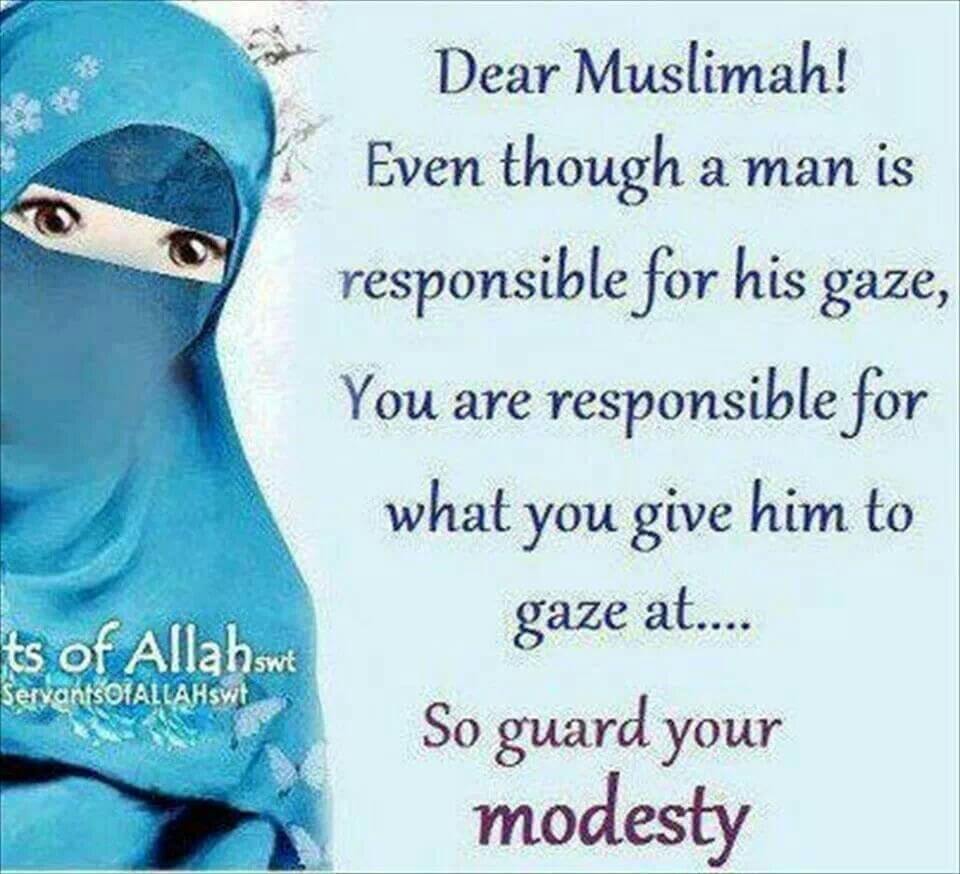 I’ve written about this topic at length before. The whole concept of the hijab in Islam is women’s modesty. It’s not that long since we got past this idea in the West, and it’s still not wholly accepted. But HOW WOMEN DRESS IS NOT A CONTRIBUTING FACTOR TO THEM BEING RAPED. Rape, or any other sexual assault, is not the victim’s fault, whether male or female.

If a woman wants to wear hijab of whatever type, I’ve got no problem with that. I do have a problem with it being linked to women’s modesty and how they are treated by others. I can understand a head scarf being a fun item of clothing and wanting to express solidarity with co-religionists. But dignifying? That one escapes me unless she wants to “perpetuate the sexist dogma of conservative clerics.” 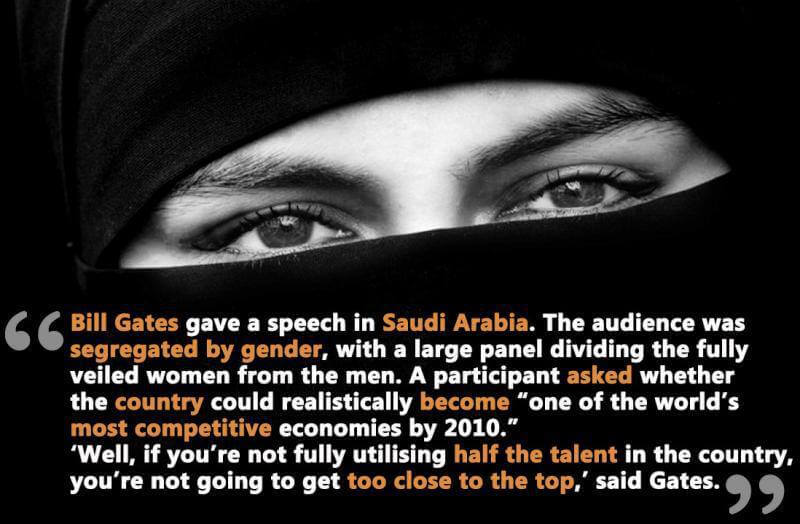 The Harvard Gazette also reports that Ms Ibrahim stated, “There are some spaces where gender segregation is appropriate.” Beyond public bathrooms, shower and changing facilities, and separate dormitories on school trips I can’t imagine what she’s thinking.

Does she consider mosques should be segregated by gender? Of course, it’s not up to me or any other non-Muslim to tell Muslims how to run their mosques. However, more and more mosques are not segregated and they seem to be doing just fine.

And so we come to a recent report by Hazem Saghiya who lives in one of those Muslim-majority countries. When people like Reza Aslan extol the virtues of Islam and how well it treats women, he always mentions the number of women who have led Muslim-majority countries. This goes down particularly well with the regressive left in the US where they’ve never elected a woman president.

Hazem Saghiya has a different view of this. He writes:

But the fact is that women are excluded from public discourse, and are suddenly remembered [only] when there is a need for proof of Western conspiracies or Orientalism that distorts [our image]. In any case, [the discourse on women’s issues] is confined to a handful of feminist men and women and a few legislators and activists in civil society organizations whose noble [intentions] and enthusiasm exceed their [actual] influence. The same is true for the Western pressure on our governments, for our governments deceive the West by beautifying [the facts and keeping up] the charade until the Western official’s [plane] leaves the airport, and then things go back to the way they were.

It’s great that Ms Ibrahim feels that her religion doesn’t limit her options in life. That’s the way it should be. However, it’s not Islam that deserves the credit. It’s the Enlightenment thinkers, the Founding Fathers of her country, and the feminists who have battled for women’s rights over the years.