The Loss of the Maori Party

I’m a bit late with the topic of the loss of the Maori Party from parliament but it’s one that’s important to me, so I want to get my thoughts on record.

One of the biggest topics of discussion following our election on the weekend was how voters in the Maori electorates cast their votes for Labour again. As a result, the Maori Party is out of parliament for the first time time its inception.

To lose people like Te Ururoa Flavell and Marama Fox from our parliament is bad enough, but the loss of a separate voice for Maori is damaging for the whole country.

First a wee history lesson. We’re a very young country. There were no people here until around 1300. Then Maori came, settling all over the country in a single mass migration. Europeans made their “discovery” of the country in the 17th century (Abel Tasman) and the first European to land here was the English Captain James Cook in 1769.

The Maori and the British came to an agreement about sovereignty and government about seventy years later and in 1840 came the signing of our founding document, the Treaty of Waitangi or Tiriti o Waitangi.

The establishment of our parliament came in 1854 with 99 seats. As a British colony, we had British rules for voting eligibility. That meant men had to own, lease or rent property above a certain value (then £50) to vote. (Women got the vote in 1893.)

Property ownership was difficult for Maori to prove as most land was held in common by iwi (tribes) or hapu (extended family). Thus 1867 saw the establishment of the Maori electoral roll and all Maori men over 21 became eligible to vote whether or not they met the property qualification. Other voters still had to meet that prerequisite until 1879.

At the same time four of the seats in parliament were reserved for Maori, which was relative to the number of eligible voters at the time. (Maori can now choose whether to enrol on the Maori or general roll. There are currently seven Maori seats, which means around a third of Maori choose to be on the general roll.)

Maori mostly give their party vote to the Labour party, though since the 1990s have often given their electorate vote to MPs in other parties. In the 1980s and 1990s there was a lot of talk about Labour taking the Maori vote for granted, but it didn’t change election results. Labour still got a majority of the party votes in the Maori electorates.

The Creation of the Maori Party 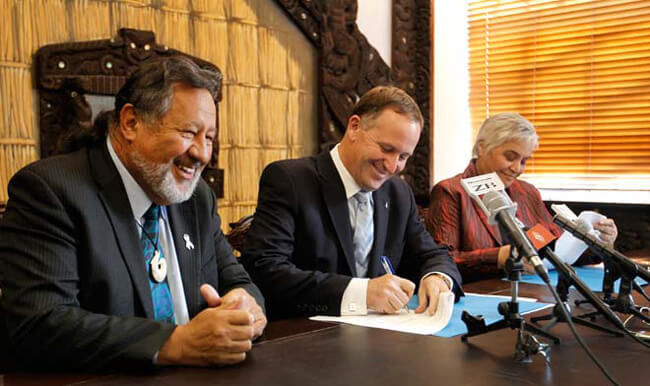 Then in 2004 the Foreshore and Seabed Act led MP Tariana Turia to resign from the Labour Party and form the Maori Party with co-leader Dr Pita Sharples. That Act was seen as a major betrayal of Maori.

The National Party was in opposition to the Act.

Turia won the subsequent by-election with 90% of the vote, but most the major parties didn’t put up candidates against her.

At the 2005 election the Maori Party won four seats of the then six Maori seats, but Labour would have nothing to do with them. Labour Prime Minister Helen Clark famously called them “the last cab off the rank” when it came to coalition talks.

In 2008 the Maori Party won five of the seven Maori seats. The Labour Party lost badly and the National Party got the most seats overall.

National didn’t need the Maori party to have enough seats to lead a government, but they offered to make them part of the coalition anyway. After consultation with their members, the Maori party agreed.

The Maori Party in Government

Since then, the Maori Party have always been part of a National-led government and held several portfolios. They have made enormous gains for Maori. In particular, their Whanau Ora (Family Health) initiative has been exceptional.

However, many Maori continue to be unhappy with the Maori Party allying itself for the National Party. Support for the Maori Party has fallen because of that and as memories fade re 2004. Thus, in the latest election, all the Maori seats went back to Labour and the Maori Party is out of parliament.

This is a terrible loss for both Maori and all New Zealand. The two co-leaders of that party in particular, Marama Fox and Te Ururoa Flavell, were excellent MPs.

The saddest thing about this election is that the Maori party is not returning to parliament. I hope their voice is not lost.

Proportionately, there are more Maori MPs in parliament than in the population. Further, there is not actually a problem with the policies of Labour, National, or the Greens in relation to Maori. However, it’s easy for the voice of Maori to be lost when they’re part of a bigger party. That’s what happened in 2004.

Big losers this election? Māori. I think parties did Māori a disservice all to claim more more more for themselves.

Further, with all the Maori seats going to Labour, they’re with a party that probably won’t be in government. That means none of the MPs representing specifically Maori electorates are in a position to do much for Maori.

There is a lot of comment that the Maori Party damaged itself by aligning itself with the National Party during the last nine years. However, by doing that they were part of government and were thus able to get things done for Maori.

National got the most votes again in 2017 and will probably lead the next government. (We won’t know for at least a week due to ongoing coalition talks and the counting of special votes.) If the Maori Party were still there, they could continue with the work they were doing.

Marama Fox put if quite clearly when she heard all the Maori seats had gone to Labour. She said it was like a family violence victim going back to their abuser.

The tweets were just as blunt. People were referring to those in Maori electorates who gave their vote to Labour as stupid, idiotic, brainless, and multiple other words besides. Before the election, most of the abuse was going the other way. There were even accusations of threatening behaviour towards those contemplating voting anything other than Labour. Feelings are running very high on both sides.

The Future of the Maori Party

The good news is that former Rotorua GP Dr Lance O’Sullivan will stand for the Maori Party in the next election in 2020. I can see this leading to a big comeback for the Maori Party. It’s been the fate of all small parties that are part of a coalition government that they don’t get the recognition they deserve. Three years without the Maori Party in parliament will, I think, make people realize just how much they did.

Former Rotorua doctor Dr Lance O’Sullivan has announced he will stand for the Maori Party in the 2020 election – https://t.co/zGVjB8r3SP

I expect to see the Maori Party back at the next election. I hope I am right. Three years with Winston Peters and NZ First as part of the governing coalition will have everyone begging for a bit of sanity again.