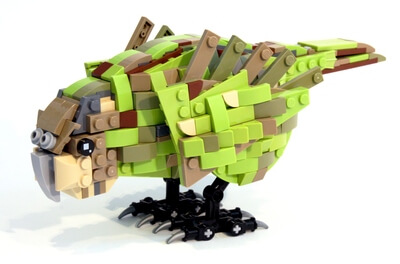 Regular readers will be aware I’m a Lego fan. I didn’t have any when I was a kid, but I’ve bought some as an adult. Nieces and nephews coming along was really cool, because it gave me an excuse to buy a lot more. It’s amazing how much of it stays at my place … (For when they visit, you understand. ) Now I’m hoping I’ll have a new reason to buy Lego – a Lego kakapo.

I’m a member of the Lego ideas website, on which people present their own ideas for new Lego sets. I must admit I usually delete the weekly e-mails because I’m busy with this website. If I hadn’t, I might have come across this really cool idea more quickly. It came up in May, but I only saw it a couple of days ago on a NZ Lego fans Facebook group.

It’s a Lego Kakapo and the maker, who goes by the name “FlancrestEnterprises”, has done a b£ood¥ fantastic job. As you can imagine, it’s getting a lot of publicity and support in New Zealand, such as from Newshub, but that’s not going to be enough to get it over the line. I’m hoping I can persuade a few of you lovely readers, who are mostly from outside New Zealand, to give this project your support too. Here’s a bigger pic of the beast in question: 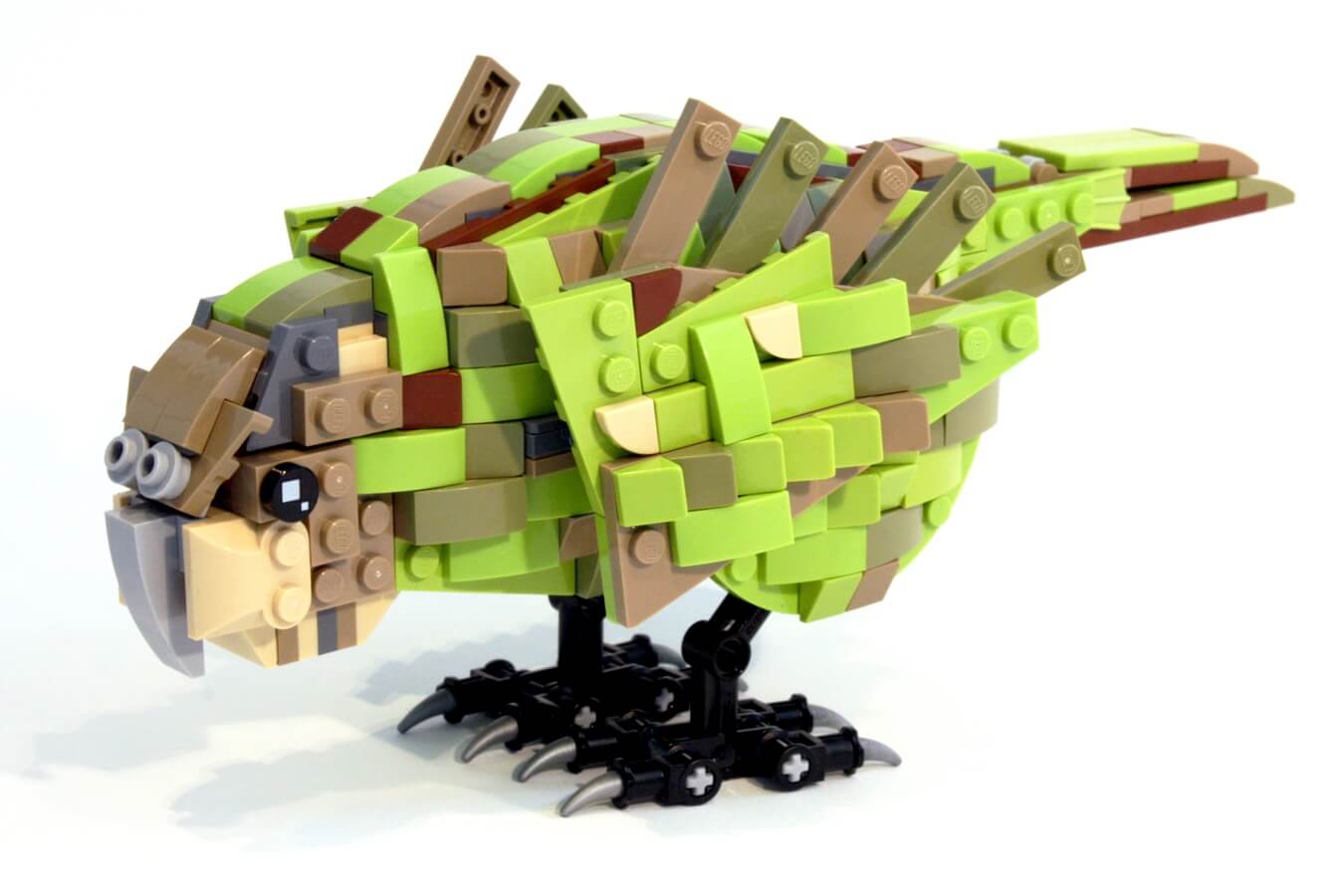 If you’re not already a member of Lego Ideas, you will have to become a member to vote. It costs nothing, but of course I will understand that many of you may not want to do that. You can still check out the Lego kakapo’s page though, which is here. That’s also where you go to vote.

There has been a lot of Twitter support recently too. Of course, I sent a tweet to my 7,200+ wonderful followers. Much better was Sirocco, who has almost 17,000 followers. He’s the Spokesbird for the New Zealand Department of Conservation. In a wonderful coincidence, he just happens to be a kakapo himself. Here’s his tweet:

Skraaarrk! Support the kākāpō set over on LEGO Ideas, we need 10,000 supporters to help make it an actual thing: https://t.co/B36dewHVny pic.twitter.com/2RpWPIHEL9

“FlancrestEnterprises”, the Lego kakapo designer reports the following about the set:

I’ve already got a fantasy that Lego will get together with this designer and produce the kakapo set. It will be so successful, Lego will cooperate with the Department of Conservation and Tourism New Zealand to go on to do a whole range of our native birds like the kiwi, kea, tui, fantail (piwakawaka), morepork (ruru), and kereru.

Please consider helping the cause!

Robespierre: The secret of freedom lies in educating people whereas the secret of tyranny is in keeping them ignorant.#Trump: “I love the poorly educated.” (And makes #BetsyDeVos Secretary of Education.) pic.twitter.com/2suGR13fUC

It’s not just the bit that the tweet below points out. Listen to Bannon at the end. He calls those people that he wants to motivate for Trump by treating the DACA kids badly “deplorables”.

CAN YOU BELIEVE THIS? Steve Bannon JUST SAID He opposes citizenship for DACA recipients Because Gop will “lose 50 seats in the House.”

THIS IS JUST HEARTLESS pic.twitter.com/q0pR5Ya9wp

Hillary wouldn’t have done it. Further, she says that what Trump was proposing would rip the country apart, and that’s just what it’s doing.

FLASHBACK: “I don’t want to rip families apart. I don’t want to send parents away from children.” — @HillaryClinton stands up for immigrant children and predicts how evil Trump’s immigration policy would be. pic.twitter.com/LhnRaYqljL

I’ve begun on post on this. As so often, whether it comes into a form fit for public consumption is another matter. But at least I can bring a few tweets to your attention.

unacceptable
unjustified
unabashed
unexcusable
untenable
In short: un-????????
This is on you, @realDonaldTrump.
You ordered this.
You could stop it in a flash.
Your attempt to shift responsibility onto others is repugnant.

Evolution of the #GOP … pic.twitter.com/clvQGAhgDq

#KimJongUn made a video for #Trump too … pic.twitter.com/ZxaCiaipb9

Negotiations between Trump and Kim reach an impasse – neither is willing to give in … pic.twitter.com/zEFdlb7KV5

Thank goodness for democracy. Once day there will be a new president, and the US president will put the democracies of the world first again and not consistently praise the world’s despots: Kim, Putin, Xi, Duterte, King Salman, Erdogan etc. pic.twitter.com/fuf51pO8v2

And there are a$$hole$ out there who say Sandy Hook was a false flag operation. The right to freedom of speech is the most important we have as a society, but it’d be nice if Alex Jones and his ilk just shut up.

A heartbreaking Father’s Day message from a dad who lost his 7-year-old child in the Sandy Hook shooting pic.twitter.com/db8DLas6NW

Where do these people come from?

This man harassed a Black mother vacationing with her 5-year-old daughter about hygiene because he was concerned about diseases in a hotel pool pic.twitter.com/mwyJC3nawX

Again, where do these people come from. How do they find each other? Why are there so many of them? How can so many be filled with such hate, ignorance, and fear? WTF is wrong with them? One question we can answer: “who makes them feel they can be so open about their racism?”

No, this is NOT a colorized photo from Nazi Germany in 1939.

This is a photo taken in Draketown, Georgia, USA a few weeks ago.

This is what I will continue to Fight against! and This is not America! pic.twitter.com/xhPRFRLYMB

Aunt Crabby gets it right again.

Tell me if you’ve heard this one…

A Nazi, an asshole, and a bigot walk into a bar… pic.twitter.com/PAFpbxMUL6

This is why I put up that Aunt Crabby tweet about Steven Miller. I think there might be one problem with this video though – someone please tell me in the comments – didn’t the Duke lacrosse players turn out to be not guilty? Or am I getting them mixed up with something else?

Stephen Miller has been waging war on society’s most vulnerable for over a decade pic.twitter.com/V5swg30Aye

A couple more tweets in the ongoing story of the brave Iranian women trying to make wearing the hijab (headscarf) a choice in their country.

This video is really important. Please watch it!

Iranian Feminist on How Western Liberals Are Making Women’s Lives Worse in Her Country: Do not legitimize a discriminatory law when Iranian women have risked our freedom to repeal this law…. https://t.co/TdQAJSzczO

There was another time kids were taken away and promised humane treatment. #KeepFamiliesTogether pic.twitter.com/7vvL8PcdO6

Rob Rogers, the cartoonist who created this cartoon, was previously fired from The Pittsburgh Post-Gazette after 25 years for criticizing the Trump administration. #KeepFamiliesTogether pic.twitter.com/lH7iXPqrZC

This is one of the sickest things I have seen in my life! Because of the teachings of the Catholic Church, this poor kid is worried that his dead father isn’t in heaven. At least Pope Francis tells him that his father is probably in heaven because the fact he had his kids baptized shows he’s a good man.

This pope is one of the good ones. He has always been prepared to say that good people, even atheists, can get into heaven. But most of the senior clerics don’t agree, and no previous pope would have said that. But this situation says everything about why religion is a scourge of humanity. It truly poisons everything.

This boy asked the Pope if his atheist father was in heaven — and received a touching response pic.twitter.com/jaTOi0VEkF

The video in this article is about 10 minutes long iirc, but it’s worth the time.

Our Nation’s Values Are Not Built on a Judeo-Christian Foundation https://t.co/gCgngNleVA via @hemantmehta

Staying with the Lego theme.
(Via Ann German.)

“The Walker” is a sculpture made from LEGO bricks by Danish artist Jørn Rønnau pic.twitter.com/Qo8t0eu9SN

I love this portrait.

Gustav Klimt with his life companion & muse ~ fashion designer Emilie Floge, Villa Oleander 1910 ■ and his 1902 portrait of her pic.twitter.com/4Ig61BNZwe

It’s not Fathers’ Day in New Zealand. (We have it in September) It’s not even Sunday. But I know it is for most of you, so here you go.
(Via Ann German,)

Great dad! (I think this was up last year too? There must be some more great dads since then?)

He can’t help lying, especially in the service of making himself look better.

DOOCY: “How are you going to celebrate Father’s Day?”

Trump is currently at Trump National Golf Club in Sterling, VA, according to the pool report. pic.twitter.com/IbKzHJ7HQK

I always think of lava as something that goes slow and you can move away from it easily. But this is amazing, and it’s real footage. It apparently hasn’t been sped up or anything!

A raging river of lava is moving at terrifying speeds across Puna, Hawaii pic.twitter.com/BPXyvLJfD6

Remember that machine that patched the road? Here’s a similar one for railway sleepers. Science is cool.

How this machine, with the help of two people, easily replaces a railroad tie [full video: https://t.co/EniNfdGxQL] pic.twitter.com/9WDFlnnkFW

Interesting. I didn’t know this, though a knowledgeable friend tells me he’s know about it for a while, so I’m probably just ignorant. Anyway, just in case some of you didn’t know either.

One of Psychology’s Most Famous Experiments Was Deeply Flawed https://t.co/AGizXqkTpZ via @LiveScience

I’ve left some parts of my garden unmown and look what’s popped up – only a bee orchid #30dayswild pic.twitter.com/fxAUwi4J7S

Roughly the size of your thumb, pelagic red crabs are not true crabs – rather, these crustaceans are a species of squat lobster that normally live off Baja California. But in exchange they are very curious https://t.co/b73Nj9aoB1 [source and full video: https://t.co/pyhhuVrNcf] pic.twitter.com/PXjWD2IdAl

As long as it leave me alone, I’m good.

a very flat spider found on or under dry bark pic.twitter.com/UVDVGQaxLZ

It takes NOTHING away from a human to be kind to an animal!

What the #Racoon was really up to … pic.twitter.com/3f11tmarbp

Another tweet from Sirocco. Isn’t this wee white kiwi gorgeous?

Skraaarrk! My friend Manukura, the little white kiwi, will be away from home (@PukahaMtBruce) for her seventh birthday due to a beak infection. She’ll be getting the best care at @WildbaseNZ. I hope she makes a quick recovery: https://t.co/3zgoydFil1 pic.twitter.com/3S6ILVAzbr

On this day in 1987, the last individual of the dusky seaside sparrow subspecies (Ammodramus maritimus nigrescens), named “Orange Band”, died in captivity under a failed breeding program. Human destruction of the habitat brought about its demise. RIP, lovely bird. pic.twitter.com/w2bXWKXeXc

This happens in New Zealand with sheep and cattle. But this is a new one on me!

Short dogs got no reason to live! (You remember that song about short people? Well, you do if you’re short and as old as me anyway!)

Beautiful dog, but she really doesn’t want anyone playing with her pup!

When this guy decided to foster a few kittens, he had no idea how emotional the experience would be ???? #FathersDay pic.twitter.com/J9zvZnmHsG

This cat dad’s so proud of his babies, and he’s making sure they’re all snuggled up with Mom ???? #FathersDay pic.twitter.com/GmTf7EIZef

This is a cat with mana! (NZ version of mojo.)

Do not be like the cat who wanted a fish but was afraid to get his paws wet.#ShakespeareSunday pic.twitter.com/8CA2P8MWot

It’s all in the eyes!

I sent this to Jerry Coyne (WEIT) and he used it this morning. But now I want it back!

“exactly which part of ‘stay in the box’ did you not understand, Glenn?”#Caturday pic.twitter.com/BNMTAWsnnH