Kaine vs Pence: The Thriller in Vanilla 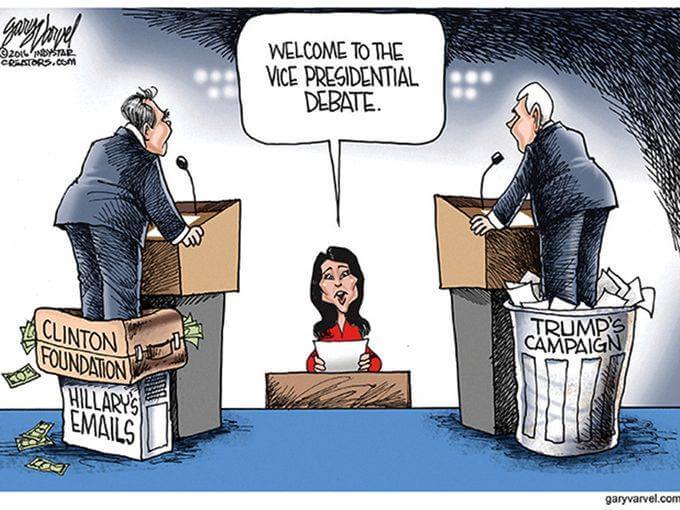 No, I didn’t make that up – the credit goes to Greg Gutfeld of Fox New’s The Five and The Greg Gutfeld Show. I like it though, so I’m using it!

So, one hour and 40 minutes before the vice-presidential debate even started the RNC (Republican National Committee) released a press release on their website stating that the Republican candidate, Mike Pence, won the debate. It was a “clear” victory they said, and he was best when he was discussing the economy and Clinton’s scandals. No need to watch the debate then I suppose! 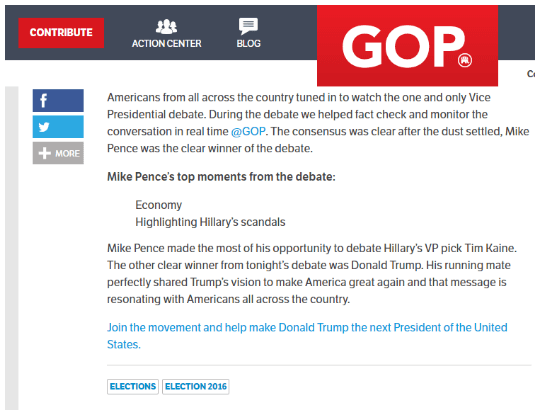 Americans from all across the country tuned in to watch the one and only Vice Presidential debate. During the debate we helped fact check and monitor the conversation in real time @GOP. The consensus was clear after the dust settled, Mike Pence was the clear winner of the debate.

Mike Pence made the most of his opportunity to debate Hillary’s VP pick Tim Kaine. The other clear winner from tonight’s debate was Donald Trump. His running mate perfectly shared Trump’s vision to make America great again and that message is resonating with Americans across the country.

They took down the press release shortly afterwards, presumably to send again after the debate is over, but not before every major news outlet picked up on the error and posted it on their websites.

Anyway it turns out that, according to a CNN/ORC poll Mike Pence did win the debate, though only narrowly (48% to 42%). In my opinion the win was on style rather than substance. However, the times where I thought he was weakest were on the economy and the Clinton scandals – the times the RNC press release said he was (would be?) strongest. Most of the time he was a pretty smooth talker, but he got a little flustered on both those questions, and he used standard tactics to give himself time to think of an answer. (i.e. When you’re asked a question that stumps you initially a tactic is to say something else to give your brain a chance to catch up such as, “That’s a very good question, I’m glad I get a chance to talk about that,” before proceeding with your answer.)

There were several times when Pence, though he remained pleasant, completely ignored the question he was asked by debate moderator Alicia Quijano. We have no idea what he would do about homegrown terrorism because he started talking about Syrian refugees in Germany being arrested. And he doesn’t seem to have any idea what to do about North Korea either because in his response he promoted conspiracy theories about the Clinton Foundation instead.

On the whole, Pence remained relatively calm throughout the debate while Tim Kaine came across as agitated and petulant. There was a good reason for that though – extreme frustration. Pence lied over and over again and Kaine’s lack of experience led him to constantly interrupt every time. That meant a whole lot of interrupting. Kaine was right each time he corrected Pence, but it came across as whiny. Kaine clearly knew his stuff, and he was keen to get everything in. Sometimes that sounded like he was delivering prepared lines, which counted against him.

There was one occasion when he got a good hit with that tactic though. The third time he mentioned how Trump had called Mexicans rapists and murderers, Pence scoffed, “You’ve whipped out that Mexican thing again.” This dismissive way of referring to a line that has massively alienated Mexicans in particular and Latinos in general is a tone-deaf comment from a candidate who must know that their campaign needs a minimum of 40% of Hispanic voters if they’re going to win the White House. Pence then said that Trump added to his comment that “many of them” were good people. Trump did not actually say “many” he said “some” but the Trump campaign has repeatedly tried to change that phrase in people’s minds ever since. They may even have succeeded in some cases, but it doesn’t make it any less of a lie.

I watched a fact-checking segment on the debate by James Rosen on Fox New’s Special Report with Bret Bair today. I normally have a bit of time for Rosen – he’s a smart and fair journalist – but I lost a bit of respect for him after this. The segment was set up as saying that both candidates were accused of “stretching the truth” at times. Rosen then fact-checked only two statements made by each candidate, and judged all four of them lies. It was presumably to give the impression that both candidates were mendacious at times. The truth is, as I said above, that Pence lied multiple times with a benign expression on his face that was exceedingly maddening for anyone who knew that he was lying, which Kaine naturally did. Further the two statements Pence made that were checked were outright lies, while the Kaine statements that were checked required considerable spin and a partisan point of view make them appear lies. 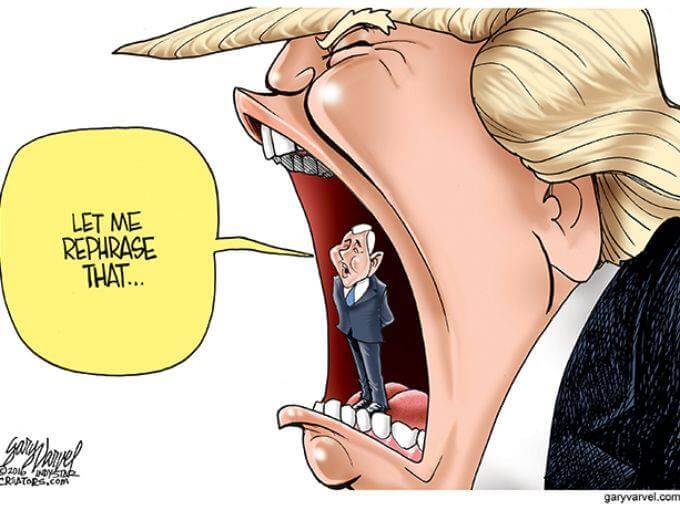 The Pence statements checked were:
1. Pence denied that he had praised President Putin of Russia. Kaine said:

Well, this is one where we can just kind of go to the tape on it. But Pence said, inarguably, Vladimir Putin is a better leader than President Obama.

Politifact has a full analysis of the back and forth on the issue, but what Pence said previously was:

I think it’s inarguable that Vladimir Putin has been a stronger leader in his country than Barack Obama has been in this country, and that’s going to change the day that Donald Trump becomes president.

2. Kaine asked Pence to defend Trump’s position that other countries should get nuclear weapons. Pence outright denied that Trump had ever said this. This is another statement that Politifact checked out. Their assessment here was also that Pence lied. (Their assessment was “Mostly False,” the “mostly” as it’s really hard to pin down Trump’s position because it changes so often.) They show that on 27 March Trump stated in an interview with the New York Times in relation to the threat of North Korea:

If Japan had that nuclear threat, I’m not sure that would be a bad thing for us. 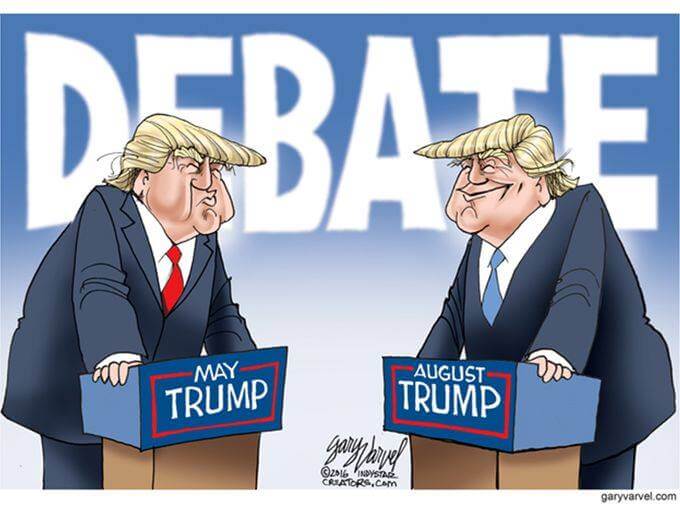 Then on 3 April in an interview with Chris Wallace on Fox News Sunday Trump added South Korea to the list of countries he thought should have nuclear weapons. Politifact also found other occasions (which can be checked out in the link to their investigation above) where Trump confirmed his support for the proliferation of nuclear weapons.

The Kaine that statements checked were:
1. That Clinton helped negotiate the Iran nuclear deal that eliminated their nuclear weapons programme. Rosen said that the deal preserves the regime’s nuclear programme because they are still permitted to enrich uranium. However, the truth is they they are no longer capable of enriching uranium to weapons grade. They are capable of enriching to less than 4% – weapons grade is 90%. He also says that because of the treaty’s future sunset clauses, they may be able to resume their programme in the future. This is true, but that does not change the fact that their programme is currently not operating, and will not for at least ten years. Further, many people are of the opinion that when the deal runs out Iran can just pick up where they left off. This is not true. The parts of their nuclear sites that were part of their weapons programme have either been completely dismantled and removed or buried under tonnes of concrete. It will not be the simple task to start up again that opponents of the deal like to make it appear. (Please read this Fact Sheet on the Nuclear Deal from the The Center for Arms Control and Non-Proliferation.)

2. Pence accused Clinton of failing to negotiate a SoFA (Status of Forces Agreement) to allow troops to remain in Iraq beyond 2011. Kaine said that there was no agreement because Iraq didn’t want the US there. Rosen supported the Pence position and pointed to a recent interview by Bret Baier with former general David Petraeus. Petraeus stated in that interview that there are currently almost 5,000 troops in Iraq without a SoFA so maybe the US could have “taken the risk” to be there without one in 2011. Personally I’m quite shocked he’s saying that and can’t help wondering if his personal animus towards the Obama administration because of his own circumstances (which were of his own making – it’s not Obama’s fault Petraeus gave confidential information to his mistress) are making him say such things to try and damage them. To say that the United States should stay in a country when that country doesn’t want them there and without a SoFA is technically an invasion, and an illegal one at that. Any US soldier that even has a minor MVA that injures a civilian could be charged with a war crime. The forces that are there at the moment are not combat troops, and they are there at the invitation of the government. It is a completely different situation.

I think if there were better and more examples of Kaine lying that Fox would have used them, and I think the fact they didn’t is indicative.

Other statistics besides who won in the scientific CNN/ORC polls taken immediately following the debate were a bit of a mish-mash. 38% thought Kaine did a better job than expected and 67% thought Pence did a better job than they expected, and I don’t know whether or how that played into the result. Both got a raise in their favourability, but Pence’s raise to 57% was much better than Kaine’s (56%) at seven points as opposed to one point.

Both candidates are considered capable of serving as president by a vast majority, but again Pence did better at 77% as opposed to 70%. As for how the electorate saw other common characteristics and qualities looked for in a vice-president: 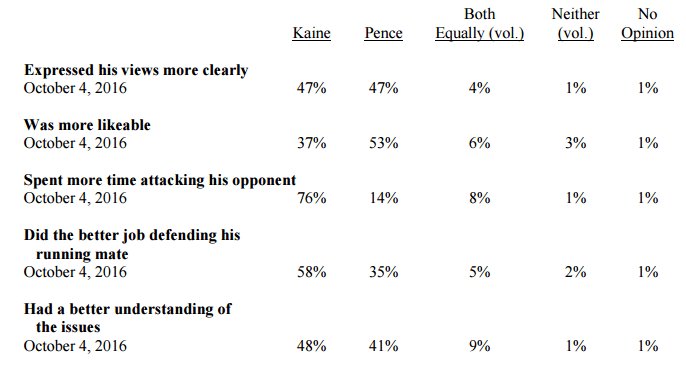 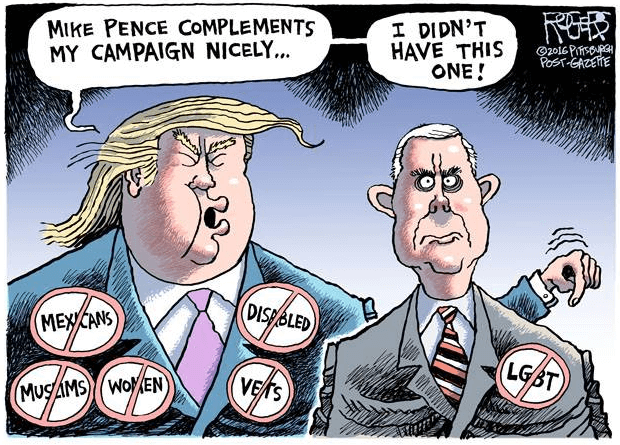 The category “Did a better job defending his running mate” is an interesting one. There are several policy points that Trump and Pence disagreed on before Pence became Trump’s running mate, and during the debate Pence effectively kept himself separated from them. He didn’t provide any sound bites supporting policies that he he may want to back away from in the future like trade, immigration, and same-sex marriage. Other than that, those House and Senate Republicans in tough races will feel a bit more confident than they did before the debate – Pence did bring a bit of dignity back to the Republican side of the campaign.

The one party member who won’t be happy is Ted Cruz. He’s clearly banking on Trump losing this election and positioning himself for a 2020 run of his own. He even eventually threw his wife and father under the bus and came out and endorsed Trump recently after party chairman Reince Preibus announced there was no future for anyone within the party who didn’t do that. Pence’s and Cruz’s policies are similar and both appear to be dominionists. Pence though comes across as much more likable than Cruz ever has and, importantly in US politics, he has “the look.” The extreme right-wing of the party are going to be lining up at Pence’s door next time around, not Cruz’s.

The presidential candidates reacted as one would expect. Trump called Pence’s showing “the best vice-presidential debate performance ever.” After asking a rally the next day if they’d seen the debate, his next sentence ended, “… and I’m getting a lot of credit for it.” Why you ask? Well, because he chose Pence as his running mate, so it was all his doing. Clinton has spoken in support of Kaine, clearly appreciative of the support he gave her.