Just Catching Up (plus Tweets) 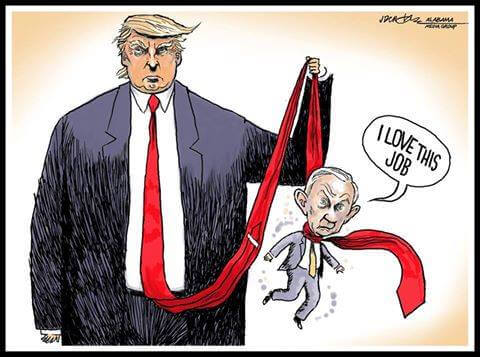 The sacking of FBI Deputy Director Andrew McCabe last night by US Attorney General Jeff Sessions was to be the subject of today’s post. However, thing’s aren’t going to plan. The post is not going to be worthy of public viewing today. Further, I’m going to be busy in the real world for the next few days. So my disgust at this whole situation is going to have to mostly pass without comment. And as I’m not going to be able to do a Proper Post for another few days, I’m reverting to a Tweets Post.

There is one piece of good news re Heather’s Homilies though. The site is now secure. You can see the wee padlock icon in the left of the address bar, and the change from http to https in the address itself. I’m very happy about this, and I know many of you will prefer this too.

Another story that I was planning to tackle is the situation in Britain with the murder of Russian emigrés by Russia. It’s not the first time of course, and I doubt it will be the last. It appears clear that these murders came at the direction of President Putin himself. Perhaps one of you lawyers can help with this questions I have. Can there be a charge of murder against Putin in The Hague? I know the International Criminal Court is for genocide, crimes against humanity, and war crimes. Surely Putin’s actions are crimes against humanity? If the ICC can’t do anything, what can be done? Does it matter that Russia withdrew from the ICC? I assume that even if his crimes meet the criteria, that means there will be no charges.

And in the meantime, Putin is about to succeed in Russia’s election. Russians know the election isn’t fair, but they don’t seem to care. (I have data on that, but it’ll have to wait.)

And that’s a useful segue to the case of the Philippines. President Duterte’s war on drugs, which of course involves the approval of multiple extra-judicial murders, has seen the ICC charge him with a crime against humanity. Duterte’s response was to withdraw the Philippines from the ICC. I note there are several people in the US criticizing this move by Duterte. While I agree with the criticism, it’s pretty hypocritical of them. George W Bush did the same with the US in 2002, which was a disgraceful move in my opinion.

Here are the current members: 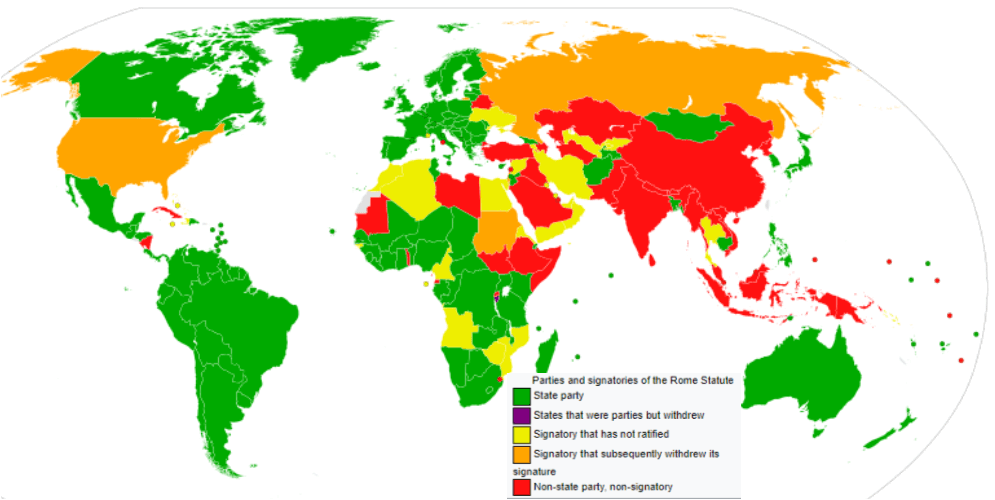 (Cropped and adjusted from Wikipedia source. Click graphic to go to source.)

As can be seen from the map, it is largely the countries that are abusing international law that are not members of the ICC.

Very interesting. I’ve just been re-watching a documentary series about the rise of Hitler. It’s amazing how many parallels there are between the way Trump has taken power and the way Hitler did it. I’m not saying they are the same sort of people necessarily – I’m just comparing the process. There’s no doubt though that more than any other demographic, it’s authoritarians who are attracted to Trump.
(Via Ann German.)

Interesting to note that the very same kinds of “personality tests” used by Cambridge Analytica to harvest Facebook data were developed in the 1940s to identify potential fascists. https://t.co/0QN3UZO9Y1

The video in this tweet is c. 1 hr 20 mins, and I didn’t watch it. I just saw the beginning couple of minutes. It’s of General Michael Flynn, convicted felon, still in his uniform, getting a long standing ovation and more, as he arrives and is introduced in stellar terms, at a fundraiser for Republican candidate Omar Navarro.

Michael Flynn (convicted felon) gets a standing ovation at a republican fundraising event.

Andrew McCabe (defended America from terrorist threats post 9/11) gets fired without a pension.

This is a shining example of what the republican party has become.https://t.co/ByCbYUu1Jk

One of the amazing Parkland shooting survivors.

Another brave woman in Iran. Change is coming there I think. It may take a few more years, but the women’s movement is strong and increasing in strength. Unlike many other countries in the region, a lot of Iranian women have experience of democracy and freedom. That makes a difference.

Protect your info!
(Via Ann German.)

What you should know: never take surveys on Facebook, or basically click on anything from Facebook that may even remotely be granting permission to anyone to use your data. Which is just about everything — especially surveys. https://t.co/DY85f82DzT

I’ve seen this before, but I’m glad to get the opportunity to post it again. Franklin Graham really is a revolting pile of scum.
(Via Ann German.)

i have nothing else to add to this. ???? pic.twitter.com/YaLkSkCVAX

This is bloody brilliant! best thing I’ve seen in a long time! This idea needs to quickly move all over the world! I hope several someones in New Zealand take it up, especially in places where there isn’t enough housing, or it’s too expensive. Millions of people who can’t afford homes could afford one of these homes.

Wow! No need to pray for your arm to grow back. Science has got this!
(Via Ann German.)

Looking for new WRP content? This never-before-seen extra is from the afternoon @grantimahara spent with actual cyborg @aannggeellll! pic.twitter.com/Nnb3JohFsQ

I’m sure she means well …

Women and the internet.

Author Claire L. Evans wants the tech world to remember that women are responsible for turning programming into an ‘art form’ pic.twitter.com/y2ryZ8NTUg

Beautiful. I could be very happy living here.

Turtles are so cute! I wish I was this guy!

This guy kept finding newborn baby sea turtles who had gotten lost in the sand. He figured out the cutest way to help them get all the way to the ocean! ????❤???? pic.twitter.com/hUiKvrkkTN

I’d like to see it all in one pic, but it’s still cool.

How deep the ocean really is pic.twitter.com/44lDsewZhQ

The SWCC Hedgehog Hospital is continuing to do a wonderful job caring for our prickly friends.

Sebastian and Derek are both doing well and now over 800g! Thank you all for your ‘get well’ messages! Here is Sebastian ???? pic.twitter.com/vGEqHHwJIl

Isn’t it lovely?! I didn’t know there was such a thing as a pink robin.

Another robin. I wish it was Batman to the rescue!

I’ve got my thinking cat on. pic.twitter.com/VHXtzYwtEj

Gorgeous animals! And there’s a next generation!
(Via Ann German.)

Not often we leave #trailcams set for video, but this week we did…and actually got something! A bit of Momma #cougar & her playful kittens. #wildlife #cabinlife pic.twitter.com/4V4vUxdQUj

This cat shows the appropriate level of interest …

What is it? And why do I love it? pic.twitter.com/GMIMUUqNNw

Just a rescued black jaguar trying to figure out what to do with his day pic.twitter.com/1mgCyd3X5k