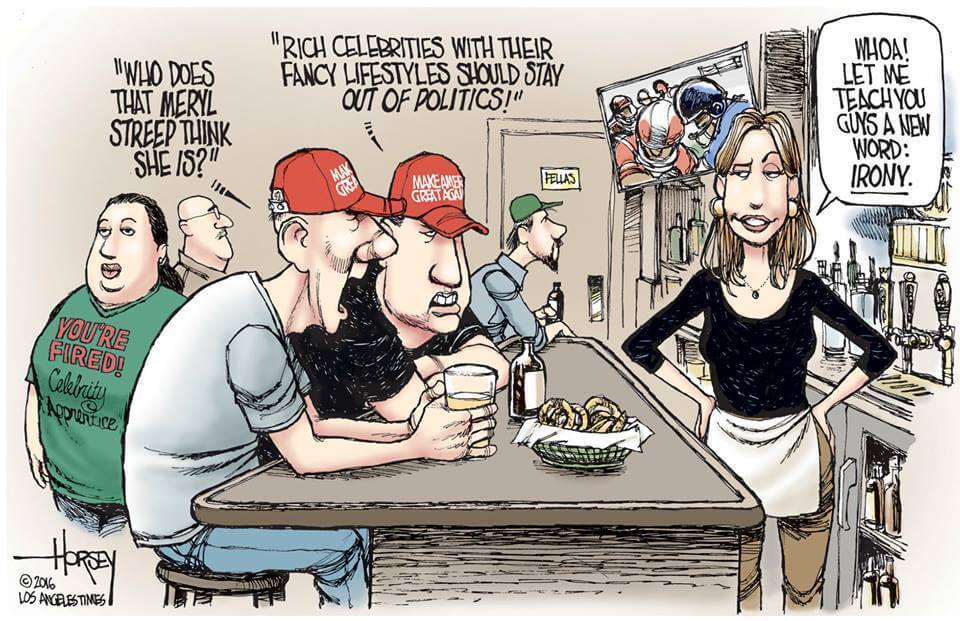 Televangelist Jim Bakker has had a chequered history. His career started with the dreadful Pat Robertson, and he had a lot to do with making him so popular. Originally, he was a strong proponent of the prosperity gospel and at one point was said to be receiving US$1 million/day. He then had a dramatic fall from grace which ended with him in prison and his first wife, the well-known (late) Tammy Bakker divorcing him and marrying a former colleague.

According to Wikipedia, he paid hush money of US$279,000 to a women after she accused him of raping her. An investigation into his finances by the Charlotte Observer resulted in a grand jury probe. As a result, he served five years of what was originally a 45 year sentence for several counts of fraud and conspiracy, and he still owes the IRS (US-equivalent of IRD) around US$6,000,000.

The original sentence was reduced because it was said the judge took against Bakker for making Christians look bad. He made a comment in his ruling to this effect and it was said to be evidence of personal animus.

Wikipedia provides this quote from his book I Was Wrong, in which he also said that prison was the first time he’d read the Bible in full:

The more I studied the Bible, however, I had to admit that the prosperity message did not line up with the tenor of Scripture. My heart was crushed to think that I led so many people astray. I was appalled that I could have been so wrong, and I was deeply grateful that God had not struck me dead as a false prophet!

According to him, his focus is now End Times and Survivalism and he’s a new man. He’s written three books on the subject. The titles show his new focus: Prosperity and the Coming Apocalypse, The Refuge: The Joy of Christian Community in a Torn-Apart World, and Time Has Come: How to Prepare Now for Epic Events Ahead.

Quite frankly, I don’t believe in his remorse though. I watched only fifteen minutes of The Jim Bakker Show, but he still looks like a huckster to me. 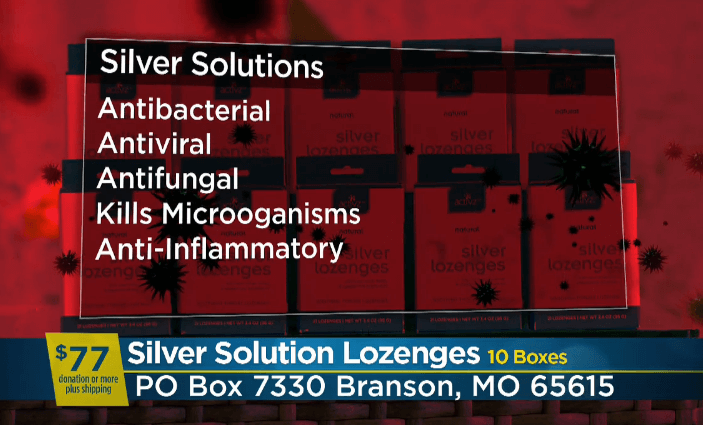 In the short portion of his show I saw, Bakker, his wife, and five others were spreading the glory of ‘Silver Solution Lozenges’.

They started by talking about the 1918 ‘flu epidemic, which they said was bird flu, and how many it killed. Then they moved to a recent press release from the CDC (US Centers for Disease Control) which they said stated that the ‘flu season this year was worse than last year. They made a direct link between the two events as if millions of deaths from ‘flu were imminent.

One of the panelists, Dr Sherrill Sellman, then states that the ‘Silver Solution Lozenges’ had been tested on bird ‘flu and killed it to oohs, aahs, and applause from the crowd. 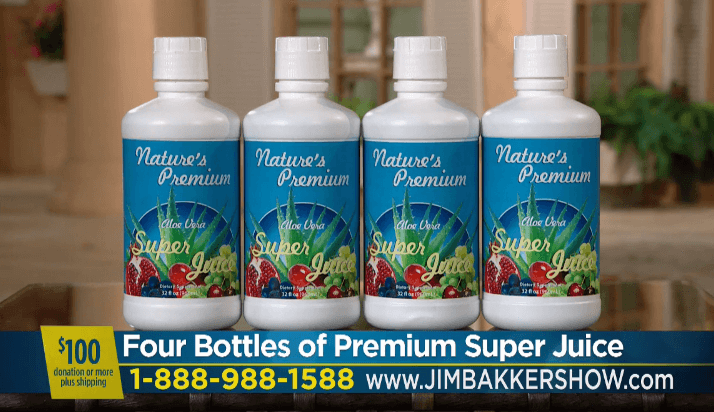 They then went on to ‘Super Juice’. Dr Sellman touted this juice as being particularly good for people undergoing chemotherapy and radiation therapy, among other things.

“That’s so good to know, I love that,” gushes Lori Bakker.

“Wow,” says Lori, “That’s amazing.” Because she didn’t know the offer was coming, of course!

It get really angry seeing people, especially sick and vulnerable people, being shilled like this. (Is Dr Sherrill Sell-man her real name?)

Bakker and his cohort are strong Donald Trump supporters. They believe that it was the intervention of God that brought Trump to the presidency of the United States.

On 19 January this bizarre offering was broadcast on Bakker’s TV show.

At this point Bakker grabs the Bible his wife passes to him and waves it around. His speech becomes all but incoherent as he contemplates what he believes the Women’s March represents. He manages to calm himself again though, with the help of the Bible he clutches. He slams it down on the desk with the words.

Jim Bakker: A million women march for the right to kill their babies. Women don’t do that if it’s normal! Women fight to save their babies! That’s natural.

Jim Bakker: You wanna know why I know that Donald Trump is born again? Because I talked personally to Paula White. And Paula White has personally prayed with him. Not just him, the family. And she ministers to them through their trials. How many years has it been Lori?

Lori Bakker: It must be fifteen at least.

Jim Bakker: Fifteen years, preparing him to be president of the United States. Come on. Stop your judging. Just say, God, you take that, you take it God. You judge ’em all. And you can let God handle it. God’s a big guy.

Seriously, I really think that if there was a God, or at least one who interfered in human events, he could have found a much better and more worthy representative than Donald Trump. A God who can do no better than Trump is really not very impressive.

Then the panel and audience go into paroxysms of joy about the possibility that we’re looking at the start of a Trump dynasty.

Zach Drew:You know we’re looking way in the future … you’ve heard of the Bush Dynasty. Maybe we’ll see a Trump Dynasty. … Some of the people that are really connected to the Trump family have even told me that Eric Trump is a firm believer in Jesus. So what is the Lord planning? Exciting times.

Pastor Carl Gallups: I was just going to say, tagging onto that, I’ve been thinking along those lines. That’s why I think the demonic power represented in the flesh in the globalist community are freaking out because of what he possibly represents not only in his own family, but think of this.

So he goes in, so we’re just talking humanly and politically but at Times End very spiritually, so if he goes in four years, and he’s appointing Supreme Court judges and federal courts, and you’ve probably heard about the 9th District Court of Appeals that there are judges getting ready to retire off of there, so that’s the most liberal federal court system in America. He could re-appoint and change the whole, the whole atmosphere of the federal courts.

But he could do that in four years; what if he goes in for eight? And what if Pence comes in behind him for four years, or eight years? That could be sixteen years. What if he puts in people in his own family?

Bakker isn’t the only one of course. Rick Joyner thinks Trump is a threat to the “Jezebel spirit” that’s taken over “so many women in America”. He goes on, clearly with no recognition of irony, about crudeness of language, worship of celebrity, and other such things that many of us see best represented in Trump himself.

Now, their delusion has increased by another order of magnitude. Right-Wing Watch brings us this clip from 24 January in which Bakker informs viewers he can actually see demons coming out of the eyes of Trump critics.

Jim Bakker: I watch a lot of news because I’m trying to find out what’s going on. Have you ever looked into the eyes of some of these people? Even the Republicans that are so mean right now. Did you ever see so many mean Republicans? … I’m telling you, there’s some people that I’m concerned that are demon-possessed. I mean they’re just going crazy!

Bakker: … They look, their eyes like demons coming out of ’em.

Baker: I believe the spirit of Anti-Christ. And I’m tellin’ ya, there’s a warfare in the heaven right now.

Baker: And, and, I’ll tell you want. The Church – we used to sing ‘Church Triumphant’ you know, and ‘Onward Christian Soldiers’. And I’ll tell you, I have never seen the Church step up like this, so dramatically, that it’s literally turning a nation around. 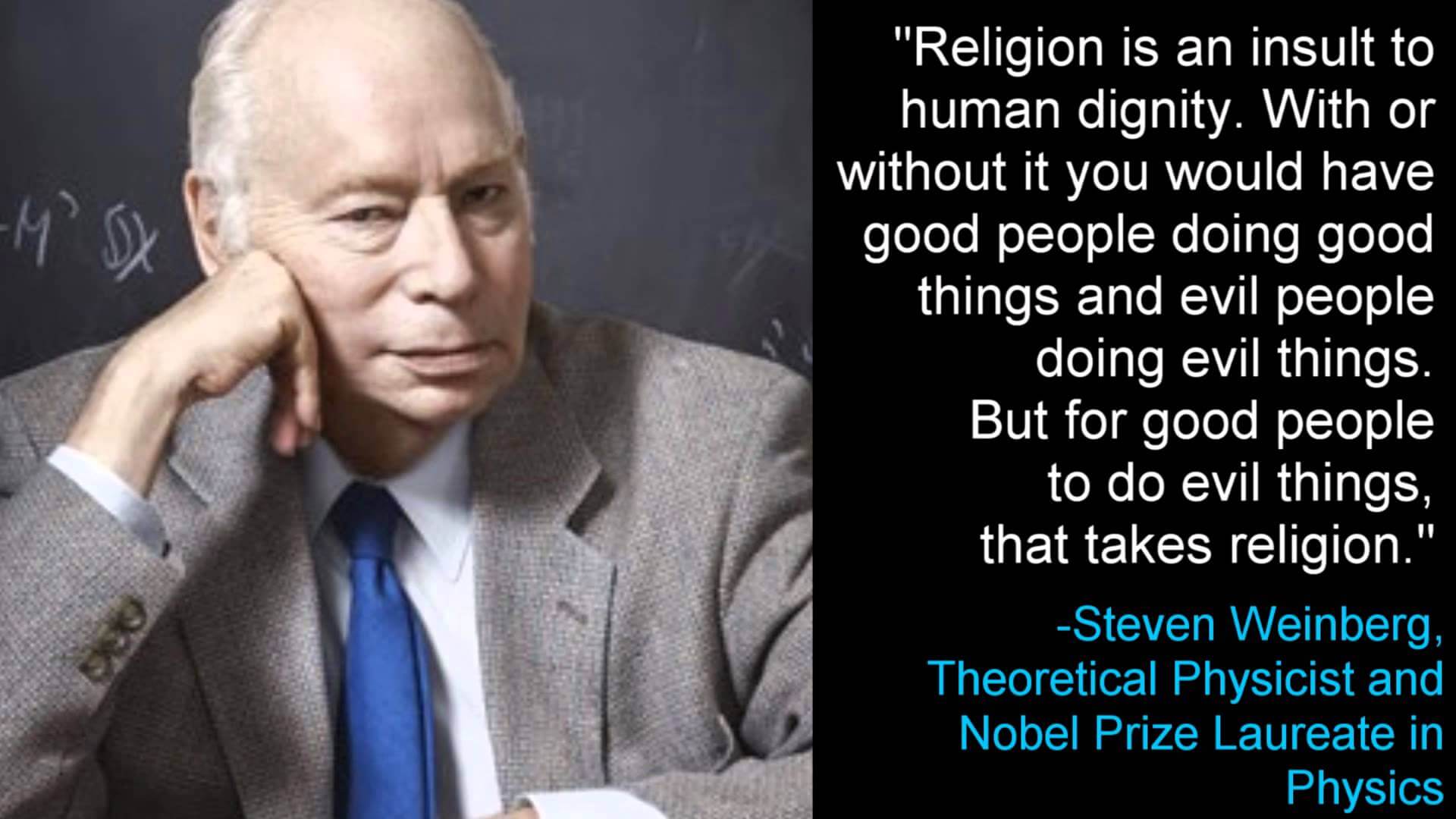 The Problem is Religion

This origin of the delusions of these people is, of course, religion. There are of course many good religious people, and many who are inspired to do good because of religion. However, because of religion they believe in things for which there is no proof, like demons, and their imagination takes over from there.

Further, people can be persuaded to do some pretty awful things because of religion. Over the centuries millions have been tortured and killed just for believing in a different version of the same god, or worshiping the same god in a different way.

Currently, one of the biggest threats on the planet is because a group of extremist Muslims want to wipe everyone off the face of the earth who doesn’t share not only their religion, but their version of that religion. 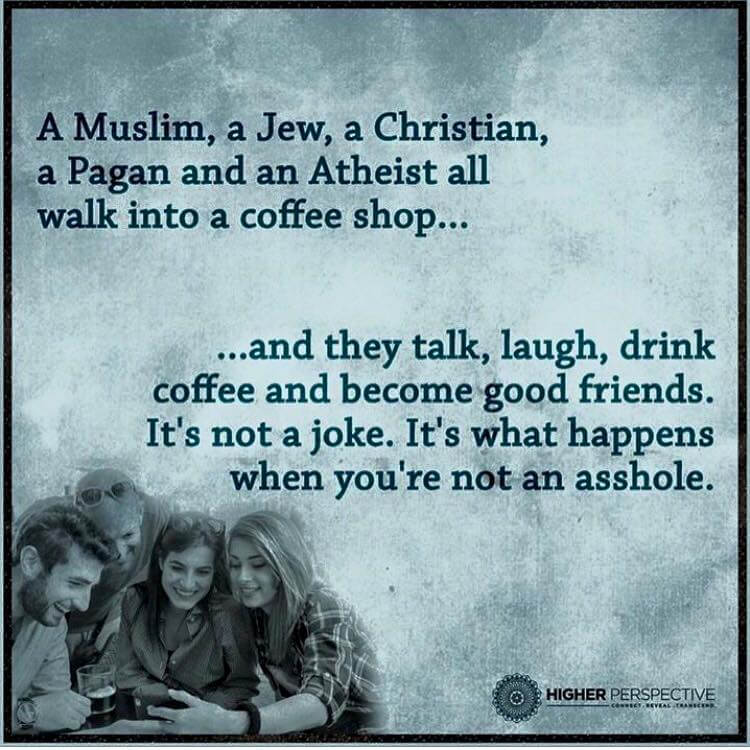