I’ve Finally Found A Use For Trigger Warnings!

As I said in my post yesterday about The Donald’s response to the tragedy in Orlando, such events bring out the best and worst in people. Here are some of the most revolting responses by average US citizens. There is a good one at the end to finish up as a balm for shredded nerves.

Some people we already know are The Worst and they responded accordingly. It took me several tries to get through this video posted by the Westboro Baptist Church on 12 June 2016 called ‘God Sent The Shooter To The Orlando Gay Nightclub’. At the time I watched it, thirty people had clicked the “Like” button. How do people get so screwed up and filled with hate?

Next is Alex Jones at Infowars.com. Unlike the Westboro Baptist Church, he’s actually got a following – almost 1.5 million are subscribed to his YouTube channel. His new video is entitled, ‘Obama’s Controlled Demolition Of America Leaves Door Wide Open To A Jihad Army’.

He opens, “I have confirmed from high level sources that there are six cells in six cities preparing to attack homosexual targets.” This is supposedly a big story, but if these are real and known about, they will presumably be stopped. Then he adds that “obviously Los Angeles and Orlando are two.” He says he got this information from the Pentagon, which would mean if this was real that they knew about the Orlando shooting beforehand and did nothing. As for the Los Angeles incident, the suspect, James Wesley Howell of Indiana was a young bi-sexual with a gun collection on his way to attend the gay pride parade there. He is not Muslim and never said, as initially reported, that he wanted to harm anyone there. His political beliefs appear to be more in line with those of Alex Jones than anyone else – for example, he made Facebook posts comparing Hillary Clinton to Adolf Hitler.

Jones went on to say this about people who don’t agree with him:

People aren’t sophisticated enough to know that two plus three equals four if they don’t get this.

As his rant continues, watch the screens that flash in the back. At 3:23 one says, “SECRET VIRUS HIDDEN IN GMO CROPS.” Where does he get this stuff? From 3:30 Jones says:

Our military said “no” to Obama because he’s not the president. He is a globalist, Wahhabist, and (unintelligible) not believe it, it’s true. I knew they were manipulating Islam, and he was acting like he was for it, I know he went to mosques when he was a kid in Indonesia, and I knew he could speak perfect, you know, Pashtun and all the rest of it.

But people like Alex Jones have hundreds of thousands of followers who hang onto their every word. They don’t seem to put what they hear from someone who appears as an authority figure in their community through any filter, they just believe everything they say. Even when it’s pointed out to them that what he says is wrong, they either make excuses or go into denial mode.

Then there are the Twitter and Facebook posts. I got these examples from the Thought Catalog blog. 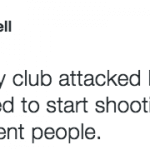 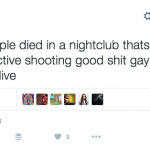 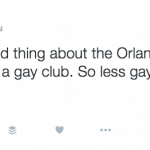 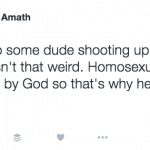 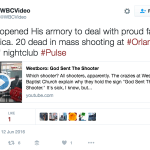 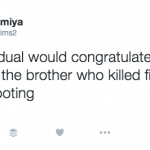 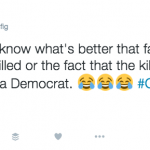 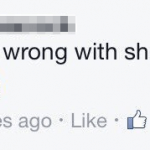 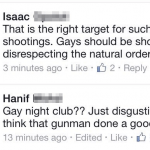 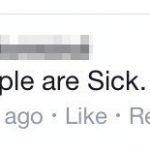 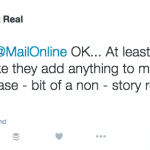 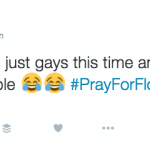 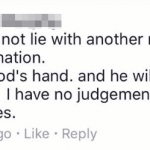 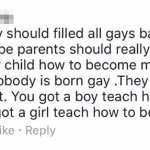 This is what religion does to people – teaches them to hate, takes away their normal compassion for their fellow human beings and makes them cruel, selfish and nasty.

There are reports that the shooter may have been gay himself. His first wife thought so – she said so to a Brazilian newspaper but was apparently told by somebody in law enforcement not to mention it to the US media. There have been multiple reports that he frequented Pulse himself and was comfortable there, and that he was a member of a gay dating site. Statements by his father show that he was vehemently anti-gay and that combined with conservative Islam is likely to have had a strong negative effect on Omar Mateen growing up and may be why there are so many people noting how angry he was.

Even if it’s not the case with Mateen, there are many LGBT people who grew up in conservative religious environments who can testify to how hard that was. There is considerable statistical evidence that the suicide rate for LGBT youth is significantly higher than for other young people. We know that Mateen’s father praised the Taliban and therefore the idea that killing for his god is a path to heaven is one he would have had significant exposure to. He may have felt that his homosexual feelings meant he needed to do something significant to enable his acceptance by Allah.

This is what an atheist had to say:

Religion was the root cause of the murders at the Pulse night club, and we’re better off without it. Because of it 49 people lost their lives, 53 were injured, and hundreds are suffering the loss of people they love.