I’ve Been Ministered To; It Didn’t Work 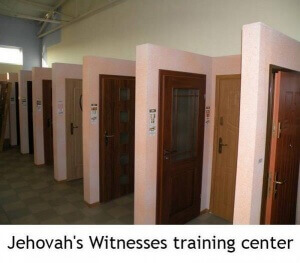 My front door is a ranchslider, so when two women knocked on it yesterday I could see they were missionaries. I answered it anyway, and let the one who did the talking give her spiel.

I told her I thought Seventh Day Adventists were evil with all their rubbish talk of the end of the world going around frightening vulnerable people.

I laughed, but I was losing already, so I couldn’t let her go.

“They’re just as bad,” I said. (So much for being master of the brilliant comeback.)

“Why do you think that,” she asked, sounding like she was really interested in what I had to say. Her head was tilted to the side and everything.

I talked about this wonderful world we have being divided by religious people, and we didn’t need belief in a supernatural being. I wasn’t at my best – it was still morning after all, and I wasn’t prepared – so I’m afraid I can’t say I gave a brilliant argument for atheism. I made my point though.

And you’ll never guess what she said next. <— That was sarcasm, because I bet you can.

“Have you had a bad experience?”

Classic! Now this has never actually happened to me in real life. It’s happened on Twitter, but not in the real world. It was quite cool actually to be able to tell her that I’d never had a bad experience with religion, that many of the people I loved were religious, and that my decision had nothing to do with any negative occurrence in my life.

That surprised her, and although she did her best to hide it, she clearly didn’t really believe me. We continued to chat, and every argument she came up with I was able to counter. There was quite a bit about how do you know what is right, and who decides what is right without the Bible. She conceded every point I made, but at the end still said we needed the Bible to tell us what’s right. It was very frustrating.

“You’ve obviously read the Bible, and know it well,” she said. “Why is that?”

I told her I thought everybody should read it as it’s an extremely important book in our culture, (More barely concealed amazement) that a lot of the sayings we use everyday came from the Bible, and many words became part of our language via the Bible.

Throughout our conversation so far she was having trouble with her right eye, and it was obviously very uncomfortable and distracting for her. She seemed to have got some mascara in it, though I couldn’t see it when I looked for it. So at this point I went and got my makeup wipes. I invited them both in and we sat at the dining table while she fixed her eye, and we continued talking. 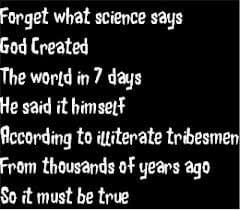 The conversation turned to evolution – she asked me if I believed we evolved or were created. I told her (naturally) that I thought we’d evolved – that I accepted the scientific evidence for that.

“You know,” she opined, “there’s actually a lot more evidence that we were created.”

“No,” I said, “there isn’t. There’s a lot more evidence that we evolved, and only someone who doesn’t understand evolution could possibly say otherwise.”

“There are some scientists who’ve come to believe in God and accept that we were created after looking at the evidence for a creator.”

“Yes, there are. but most don’t. The vast majority of scientists accept evolution.”

And so we went back and forth for a bit, and she (who did tell me her name just before she left, but I’ve never been good at remembering names) moved onto Adam and the Garden of Eden. She talked about how Adam had sinned by eating the tree that God had told him not to, and so we all inherited that sin. That gave me a heap of scope of course.

I started by using an argument I’ve heard Dave Silverman of American Atheists use: God is omniscient, he knows everything, so by putting that tree in the Garden of Eden he knew Adam would eat from it. He set him up. It was all down to God. Adam didn’t even know what sin was, and he hadn’t been told the consequences, but God did know so it was his fault, not Adam’s.

That one actually hit home. Yes, I know, she’ll chat about it with her coreligionists and they will come up with a reason why it’s not God’s fault, but I had a moment.

Then I argued that even if you accept Adam was wrong and he had to be punished, it’s wrong that not only should he suffer for the rest of his life, but so should all of his descendants for the rest of eternity. They did nothing wrong. If your child does something wrong, you don’t suddenly send your child’s child off to time out at some point in the future for their parent’s misbehaviour forty years earlier, for example.

She handed me her Bible at that point, asked me to read Romans 1:20

For since the creation of the world God’s invisible qualities—his eternal power and divine nature—have been clearly seen, being understood from what has been made, so that people are without excuse.

Perhaps she was making a point, but it was lost on me. Maybe she just wanted to make sure I could touch it without bursting into flame?

The “fact” we inherited Adam’s sin seemed to be a point she really wanted to get across, so I went into the evidence that we didn’t descend from only two people – that the smallest number our planet ever got down to was around 12,000. She seemed a bit shocked by that one, and read some of her Bible to me.

I told her God didn’t create man, man created God. I checked Google and got the full verse:

James 4:8: Draw near to God and He will draw near to you. Cleanse your hands, you sinners; and purify your hearts, you double-minded.

No wonder she didn’t want me reading that one myself. 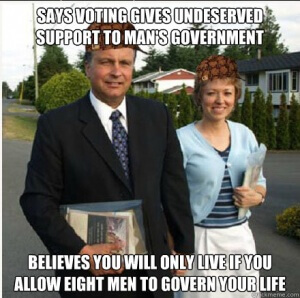 “So,” she said, “how do you explain evil?” Then went on at great length about all the evil in the world, and how we can’t get the the world’s leaders, but God listens to all our prayers.

“So,” I said, “God has this plan for how the whole of creation is going to go, then you pray for something, and he changes his mind?”

I got the woo talk then about positive vibes making a difference.

“Do you really believe,” I continued, “that He checks some prayer-meter and thinks He’ll change his plan because enough people have prayed for something.”

I think I scored a (temporary) point there too.

We’d been going for a good 45 minutes at this stage, and I’d been letting her off big time really. These strangers turn up on my doorstep pushing their myths as if they were the truth. I can handle them, but there are plenty who are vulnerable to that kind of bovine manure. So I turned the conversation to defellowshipping.

I told her that I thought the practice was appalling and that any religion that made its members choose the church over their family was disgusting. She tried to defend the practice and said it was a free choice. Nothing I said made a dent in her rote answers, but she was clearly unsettled. The older lady who was with her, who hadn’t said a word throughout was watching her like a hawk.

Then I moved onto children. She was quite excited by this, and thrilled to tell me that children are encouraged to take a full role. I told her I thought it was awful that the children were denied so much of the world (they are not allowed to go to university, for example). She again proudly quoted the Bible about teaching children while they’re young. I told her that children naturally accept what parents who love them tell them, whether it’s true or not, but that if religious instruction was left until they were older most wouldn’t believe it. I didn’t go full-on, which would have been getting her to justify all the children who died because of Jehovah’s Witness practices re medical care, and whose pictures were proudly displayed on the cover of their magazine Awake! as martyrs, but I made my point.

We’d been going for a good hour, and our conversation reached it’s natural end. She told me that even though I was an atheist, I was obviously a Good Person. Yes, I got the Christian Seal of Approval. I was probably supposed to be pleased and grateful, but if I’m looking for a character witness, I’m darn sure I won’t be going to the nearest Kingdom Hall. The woman was very friendly as she left, but still the older woman she was with still said nothing to me. In fact she never even looked at me throughout. Looking back it was rather weird.

Anyway, I plan to read up on the Jehovah’s Witnesses now in preparation for their next visit.

It’ll probably be the Seventh Day Adventists who turn up.