It’s Time for Bernie Sanders to Step Down 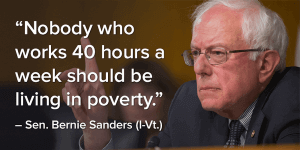 I admire the way Bernie Sanders has conducted his campaign to be the Democratic nominee, and support may of his policies. However, it’s time for him to admit it’s over and to step down.

It’s got to the stage where Sanders is coming across as a sore loser. He did a good job. He motivated a lot of people. But more people want Hillary Clinton to be the Democratic nominee.

If he’s still there saying he’s going to “carry on to the convention” when President Obama comes out in support of Clinton in the next couple of days he will look a fool.

This has got nothing to do with progressing the socialist cause either, it’s become about himself. He’s already in a position where he will be given a good spot at the convention, but that’s no big deal in the long run. How much sympathy do you think he’s going to get in the Senate over the next four years if he carries on fighting against Clinton over the next six weeks?

Step down gracefully Bernie, and maintain the respect you’ve deservedly gained before you lose it.