It’s Not the Facts, It’s How you Present Them: The Reza Aslan Tactic

In his self-appointed role as an apologist for Islam, Reza Aslan is determined to prove that the religion is a wholly benign influence. His position is that Islam itself should not be blamed for the negative attitudes and behaviours of its adherents. This is an untenable position and it seems to me that Aslan himself actually knows this. He wants to be the happy face of Islam and will say anything to maintain that. His denial of the role of Islam shuts down honest discussion, and makes it harder for the world to move forward.

In an op-ed in the New York Times a week ago he said:

On one hand, people of faith are far too eager to distance themselves from extremists in their community, often denying that religious violence has any religious motivation whatsoever. This is especially true of Muslims, who often glibly dismiss those who commit acts of terror in the name of Islam as “not really Muslim”.

This is exactly the point those of us he calls “New Atheists” are trying to make. It also demonstrates he knows Islam is not without fault when it comes to finding the motivation for aggression and brutality. However, he then spends the rest of the op-ed explaining why religion bears no responsibility for the acts of its adherents:

No religion exists in a vacuum. On the contrary, every faith is rooted in the soil in which it is planted. It is a fallacy to believe that people of faith derive their values primarily from their Scriptures. The opposite is true. People of faith insert their values into their Scriptures, reading them through the lens of their own cultural, ethnic, nationalistic and even political perspectives.

Aslan then goes on to reference conflicting verses in the Bible and the Qur’an and tells us: 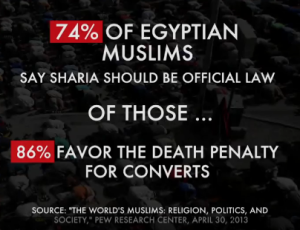 The Pew Research Center statistics, as presented on MSNBC

A few days later he appeared on MSNBC with Chris Hayes. (We don’t get MSNBC in New Zealand, so I was unaware of Reza Aslan’s latest TV appearance until reader Shwell Thanksh brought it to my attention – thank you.) In the interview, Hayes appeared to be dedicated to little more than showing Aslan in the best light possible. Despite this, Aslan managed to show his true colours. Hayes brought up the issue of the large numbers of Muslims who believe death is an appropriate punishment for apostasy, and illustrated this with statistics from the Pew Research Center. Hayes described the statistics as “troubling” and appealed to Aslan to agree with him. Aslan wasn’t able to do that, but instead diverted the conversation:

Hayes: Now that’s a troubling polling result; I think both you and I would agree, right?
Aslan: The second number is a troubling –
Hayes: Right.
Aslan: – poll result. The first one you have to understand that those very same, that very same poll showed that of those 70-something percent that there was a massive variety of views on what they even meant by Sharia Law –
Hayes: Right, right.
Aslan: – you’re talking about marriage and divorce laws as well as inheritance laws as well as penal laws, but you’re right, 64% wanting the death penalty for converts out of Islam becomes incredibly frightening until you read the rest of the poll wherein 75% of Egyptians also wanted religious freedom.
Hayes: Right, right.
Aslan: If that sounds like a contradiction, it is, because religion and religious-lived experience is full of contradictions. So 64% wanting the death penalty, that’s scary. But, of course in neighbouring Tunisia it’s about twelve percent, in let’s say Lebanon it’s one in six, in Turkey it’s five percent. So the larger issue is can you look at a scary poll of a place like Egypt and, the largest Arab country in the world, and use that to make some kind of broad generalizations about the lived experience of 1.6 billion Muslims all around the world? You can’t. And here’s the problem: I think what Maher and Harris are getting at is they want to condemn beliefs.
Hayes: Right.
Aslan: Frankly, look, I’m gonna be honest with you, if you are some kind of ultra-orthodox Muslim who believes every word of the Qur’an is literal and that gays are going to hell, and that anyone who converts should be killed, I don’t have a problem with you, as long as it’s just your beliefs. I don’t care what you believe. It’s actions we should be focusing on.
Hayes: Mmm.
Aslan: We need to condemn actions, not beliefs. You can criticize beliefs if you want.
Hayes: Well let me push back on that for a second, I think if you, I think it’s fine to condemn beliefs actually, but I think the more demeaning issue is the one you raise in your op-ed. People saying they are a religion is as much about identity, right? And the perfect example of this is the Catholic Church, right?
Aslan: If it’s just your beliefs … There’s a fundamental misunderstanding about the difference of religious text and the lived experience of the religious community and I think that’s what a lot of the simplistic, knee-jerk, criticism of religion doesn’t seem to get. You can scour the scriptures for some awful bits of savagery and say, “Ah ha, that’s the religion,” except that for the people who live the religion, some of them agree with that savagery, some of them don’t, you just ignore it, some interpret it away, some focus on other aspects of the scripture. Religion is an infinitely diverse experience… .

Aslan pretends the decision on how a believer interprets scripture is an entirely independent one, and has nothing do with the religion itself. This is simply not true. A person’s interpretation of scripture comes from their religious leaders. This is particularly true within Islam where mosque attendance is monitored and questioning of doctrine is discouraged.

In all countries, there are Muslims who believe apostasy is a crime deserving of death. In secular democracies with independent judiciaries, apostates are generally safe from those who hold such a revolting belief not because of any particular virtue of the Muslims in those countries, but because of secularism. A vigilante Muslim, acting on their belief that following the law of Allah as taught by most Imams is more important than any other consideration, may still act on that belief, anywhere. A person who doesn’t believe apostates deserve death will never kill a person for apostasy, wherever they live. Belief IS important, and offensive beliefs must be confronted and condemned.

When the Roman Catholic Church was the dominant political player in Western Europe in the Middle Ages and preached that deviation from core doctrine (heresy) was a sin that deserved death, we had the Albigensian Crusades and the Inquisition. Then there was a ground swell within Christianity led by men like Wyclif, Luther and Calvin. Christianity moved on, and the discussions continue throughout the Christian world. Pope Francis is currently leading ground-breaking talks at the Vatican that will bring the Roman Catholic Church’s teachings further in line with current values. Islam, on the other hand, continues to do its best to shut down criticism.

As long as Muslim religious leaders continue to teach that apostasy is not only a sin, but a crime deserving of death, individual Muslims are going to continue to support the practice. For this to change it needs prominent imams to speak out against it. Like the Qur’an, the Bible has passages that say apostates and non-believers should be killed. However, as far as I’m aware, no Christian religion endorses this practice any longer. In fact, many specifically condemn it. This is why Christians no longer support death for apostasy. There are still many who, disgustingly, disown family members for apostasy, or who come out as atheists as gays, but murder is not on the cards within Christianity.

As much as Reza Aslan says the level of brutality in the implementation of Sharia law is dependent on the country, the fact is these countries derive their values from Islam. They are implementing Sharia law because of their devotion to Islam. If it wasn’t for Islam’s teachings on apostasy, homosexuality and atheism, this wouldn’t be an issue. The root cause of the problem is Islam. Until that is addressed, nothing will change.

I think it’s pretty indisputable that any religion that can manifest itself in the form of something like ISIS in any period in history is in a very bad way. I know they’re outliers – even with respect to al Qaeda. But, leaving these mass murderers and sadists to one side, any religion that still cannot allow its own texts to be subject to scholarly and historical inquiry, any religion that denies in so many parts of the world any true opportunities for women, and any religion whose followers believe apostasy should be punished with death is in a terrible, terrible way. There is so much more to Islam than this – but this tendency is so widespread, and its fundamentalism so hard to budge, and the destruction wrought by its violent extremists so appalling that I find Affleck’s and Aslan’s defenses to be missing the forest for the trees. 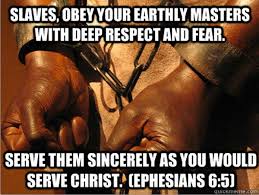 Moving forward within religion in contradiction with sacred texts is possible and there’s no reason why Islam cannot do it. There are multiple examples within Christianity. Slavery, for example, is well supported within the Christian Bible and it’s not that long since the Bible was used to justify this abhorrent practice. Now, as far as I know, there are no Christian religions that continue to teach that slavery is God’s will. Even the most fundamental religions that tout their version of Christianity is based on a literal reading of the Bible that dismiss evolutionary theory as a lie and homosexuality as an abomination, do not support slavery. Slavery still occurs in majority Christian countries, but whenever it is discovered it is universally condemned and the perpetrator is prosecuted. If parts of Christianity were still teaching that slavery was acceptable, Christians would still be fighting for the right to practice it. 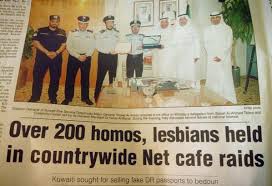 Sharia Law at work in Kuwait

There’s a more modern parallel with the different views of homosexuality in different religions. In most Western countries not only is homosexuality no longer illegal, but so is any discrimination on those grounds. However, because there are still Christian churches that teach that homosexuality is a sin, many people in the LGBT community suffer unnecessarily. The fact that suicide is far more common among LGBT people is, in my opinion, a crime against humanity. There are even businesses in the United States actually fighting for their “right” as Christians not to do business with gay people. For these people, their religious beliefs inform their actions. It is not a problem with the laws or governance of America, it is the fact that some religions teach that it’s okay to hate certain people because of the way they were born.

So when Reza Aslan says it’s a Saudi Arabian problem, not a Muslim problem, that sees that country regularly hanging and beheading people for the “crime” apostasy, atheism or homosexuality, he is simply wrong. The root cause is that Islam teaches that not believing, atheism and homosexuality, are sins punishable by death. As long as that is the case, atheists, apostates and LGBT people will continue to suffer in Muslim communities, whatever country they are in.