Islamophobia-phobia is the fear of appearing to be Islamophobic. I have to give credit to author and television personality Greg Gutfeld (Fox News’s The Five, Red Eye) for the term. The Five is a guilty pleasure of mine, and it was while watching this show that I heard Gutfeld come up with the expression “Islamophobia-phobia” a few months ago, and he’s used it frequently since. Gutfeld is The Five’s resident libertarian Republican and I disagree with 90% of what he says. However, as I’m yelling at the TV telling him why he’s wrong, I can’t help but admire the wonderful way he expresses himself. His use of words is a real treat.

And he’s right when it comes to Islamophobia-phobia. It’s a condition a lot of my fellow liberals exhibit. They’ve bought into the idea that any criticism of Islam denotes a hatred of Muslims. They have such a fear of being tagged with any label that may make them seem other than progressive, they’ve become apologists for one of the world’s most intolerant belief systems. They’re unable to recognize that criticism of Islam is not necessarily criticism of Muslims themselves. They have no problem, for example, attacking those sects within Christianity that teach homosexuality is a sin without anyone thinking it’s an attack on all Christianity or all Christians, but they’re unable to do the same with Islam.

Following the now infamous exchange on Bill Maher’s show with him and Sam Harris on one side and Ben Affleck and Nick Kristoff on the other, the issue has been widely discussed. I’ve written about the part Reza Aslan played a couple of times myself. It’s been well addressed by Sam Harris in his blog entitled Can Liberalism be Saved from Itself two weeks ago too. Jerry Coyne has done a couple of great posts on the subject: Islam vs Liberalism and a couple of days later, Sam Harris responds to the Islam Fracas. The Canadian Atheist site also has two excellent articles on the subject: Liberals Acting Badly: The Smears Against Sam Harris continue by Diana MacPherson and Tone Deaf Atheism and Context by Joe.

There is evidence of this phenomenon in New Zealand too – roll TV3’s The Nation on 18 October. I listened with disgust to investigative journalist Jon Stephenson, backed up by host Lisa Clark, as he displayed the same faulty logic as Aslan, Affleck and Greenwald when it comes to DAESH (ISIL). The complete illogic was appalling. 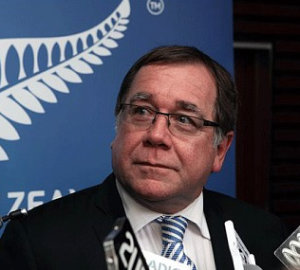 New Zealand has just been elected to one of the temporary seats on the UN Security Council, and those on the far left seem determined to criticize this achievement. Lisa Clark interviewed foreign minister Murray McCully about this and the possibility of New Zealand getting involved in Iraq and Syria on more than just an humanitarian basis. As she got further into the interview it deteriorated into a partisan hack piece. Clark, for example, compared Saudi Arabia with DAESH (ISIL) and said as a principle that if we’re going to take military action against DAESH we should be doing it against Saudi Arabia.

Saudi Arabia and DAESH are not, or course, comparable. Saudi Arabia’s laws, however abhorrent we find them, don’t threaten New Zealand. We should as a country (and, in fact, we do) speak out against non-humanitarian laws, wherever we find them. China is one of our biggest trading partners and we have a lucrative FTA (free trade agreement) with them, but we continue to speak out against human rights abuses there. DAESH is a threat to the security of New Zealand. The US-led coalition against them has sixty members which have also identified them as a threat. Like us, none of them is taking military action against Saudi Arabia either because Saudi Arabia is not a threat to their national interests. 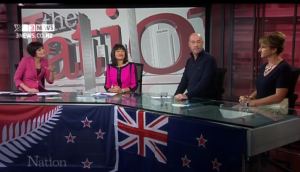 The panel discussion following the interview was led by Clark and included renowned constitution lawyer Mai Chen, foreign correspondent Jon Stephenson and Trish Sherson, PR Consultant and former staffer for right-wing political party ACT. Stephenson, with whom Clark clearly agreed, dominated the discussion and both expressed their animosity towards the current National-led coalition. (National is a centre-right party.) National has expressed their desire to ensure any action taken by the government in regards to DAESH has broad-based support, and has committed to debating such action in parliament. Chen was cut off when discussing the legal issues facing the government and the following exchange ensued:

Stephenson: I think it’s absolute scare-mongering. [I loved the expression on Chen’s face at this point – at least she’s got her head screwed on properly.] I’ve done a couple of stories on this issue and I can say from what I’ve observed and the people I’ve interviewed that this has been grossly overstated by the prime minister and I think it’s appalling political judgment, but more importantly it’s appalling in the sense that the very people that you need to win over when you’ve got a potential terrorist threat are the local communities from which those people are derived. And when you alienate them and you marginalize them as has happened in Australia you create the very conditions that lead to that (Clark nodding), so I think it’s appalling, appalling judgment by the prime minister.

Chen managed to get a comment in at this point:

Stephenson and Clark really don’t get it. They’re still at the place Obama was when he first came into office and went on what the Republicans called his “Apology Tour”. He thought if you were nice and recognized all the political and civil issues faced by these groups they would no longer see America as the “Great Satan”. Of course we have to work to ensure everyone enjoys the same type of society we have in New Zealand. The problem is, much of the attitude towards the West by many Muslim people isn’t related to the tough political and civil issues they have to deal with. For those who join terrorist groups like DAESH, the hatred is based on religious belief, and the only thing the West can do to ameliorate things in their eyes is convert to Islam and adopt to Sharia law.

Sam Harris put the following interview with former Iraqi MP Ayad Jamal al-Din on his Twitter feed today. It needs to be seen by all those who think we’d be better off ignoring DAESH.

Al-Din is intimately aware of the issues facing his country, including the threat of DAESH. The Iraqi government has asked for help is dealing with them. The US-led coalition includes several Sunni majority countries such as Saudi Arabia, UAE, Jordan, Bahrain and Qatar, all of which have participated in air strikes against DAESH. That is remarkable – that Sunni countries are joining the USA against a Sunni terrorist organization. All this should give those who are opposed to operation Inherent Resolve (yes, that’s what the Americans are calling it – it’s not all good!) pause for thought.