Is New Atheism a Cult? 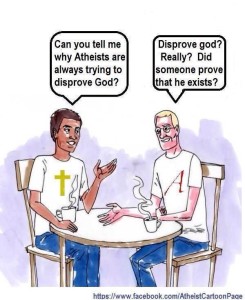 New Atheism is a social and political movement that began in the early 2000s in favour of atheism and secularism promoted by a collection of modern atheist writers who have advocated the view that “religion should not simply be tolerated but should be countered, criticized, and exposed by rational argument wherever its influence arises”.

A commenter put this link on Jerry Coyne’s Why Evolution Is True website this morning on a post about the kid in Texas who got arrested when he brought a clock he’d made to school, because they thought it was a bomb. It does seems likely, though the facts aren’t all in yet, that 14-year-old Ahmed Mohamed was treated badly because he’s Muslim. Coyne was decrying the appalling treatment of Mohamed. The idea that a child, who had clearly done nothing wrong, was handcuffed, perp-walked, and interrogated without being allowed to contact his parents is horrific.

The link goes to a post on the Vridar blog called Atheism, Cults, and Toxicity. The author, Neil Godfrey, is in the camp that thinks New Atheists like myself are a pretty nasty lot. He has a particular dislike for, among others, Jerry Coyne, and considers that Coyne’s opinions are unjustifiably sympathetic towards Jews and Israel and bigoted towards Muslims. There’s been a fair bit about that on the Vridar site lately, though I confess I haven’t read much of it. I suspect the commenter on Jerry’s site was questioning whether Coyne’s sympathy for Mohamed was genuine, or whether this post was in response to the recent attacks on him – that he’s trying to prove he’s not bigoted towards Muslims.

As someone who has been following Coyne’s website for a while, I can attest to the fact there have been several posts in the past that have supported Muslims who have been the victims of bigotry and this post is not unusual in tone or content. Further, Coyne has anti-racism credentials that go back decades. Anyway, so far no-one on Coyne’s site has taken the bait.

Godfrey’s post proposes that New Atheism is a cult. The definition of cult he uses is from the American Family Foundation. They are a group of committed Christians who do outstanding work in the rescue and rehabilitation of people from cults. Their definition of a cult (which I copied from Vridar) is:

1. The group members display an excessively zealous, unquestioning commitment to an individual.

2. The group members are preoccupied with bringing in new members.

3. Members are expected to devote inordinate amount of time to the group.

4. Members are preoccupied with making money.

5. Members’ subservience to the group causes them to cut ties with family and friends, and to give personal goals and activities that were of interest to the group.

6. Members are encouraged or required to live and/or socialize only with other group members.

Due to some interactions Godfrey has been having with New Atheists recently, mainly via his blog, he has decided New Atheism is a cult. (A regular commenter on this site has noted in the comments that he has come to agree with him, although he has also noted that he considers I personally do not fit the criteria.) Personally, I think the assertion that New Atheism is a cult is ridiculous. If anyone can demonstrate that New Atheists meet the above criteria I’ll eat my one and only hat! 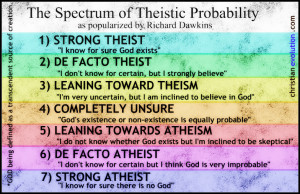 In The God Delusion, Richard Dawkins developed a theistic probability scale (at right), and many atheists define themselves according to this scale. Atheists are a 5, 6, or 7 on this scale. Most who use the word “atheist” are a 6 or 7, but few would claim to be a 7. I’m a 6 on this scale as I don’t think we can know for sure there’s no god, which is the position most atheists, new or otherwise, take.

The important thing to note however, is that being an atheist does not bring with it any belief system whatsoever. There are dozens of analogies for this out there. Here are a few.

You can probably come up with some good ones yourself.

On Coyne’s website, he included a clip from the atheist YouTube channel The Young Turks, where they talk about Mohamed’s arrest. The presenters on that show, Cenk Uygar and Anna Kasparin, are firmly in the anti-New Atheists camp. (Uygar has become known for his criticisms of leading New Atheist Sam Harris.) Their analysis of Mohamed’s arrest is solid, but in the clip they blame New Atheists for the attitude that lead to his arrest. They also, in their anti-New Atheist way, say Christians, Jews and Muslims should be able to have their own church courts for minor non-criminal issues if they want to. Live and let live when it comes to religion is their opinion.

I’m bugged by TYT [The Young Turks] blaming New Atheists for the attitude to this poor kid. Tens of millions of conservative Christians are suspicious of ALL Muslims, while NAs [New Atheists] speak against Islam to a greater or lesser extent in a more general way, but somehow this is the fault of NAs, and in Texas, a bastion of right-wing conspiracy theorists.

I also don’t agree with his support of religious tribunals, whatever the religion. Women and the socially powerless are frequently victims of these. They do not have a choice whether they use them, as he seems to think. Secular justice is, in principle at least, blind, and we should not be sanctioning other forms of justice if they cannot guarantee to operate on the same basis.

I screwed up the grammar a bit, but WordPress comments doesn’t have an edit function, and you’re all smart enough to work out what I mean. (A couple of people made some good responses to what I said too, but I don’t want to put them here without their permission. You can go to this link to see them.) My personal principles mean I can’t just stand idly by when I see others suffer. I think most people are the same. For me, that means when it is religion that is causing the suffering, whatever the religion, I don’t stand by either. 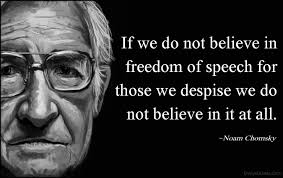 He’s right, so why not New Atheists?

Many people think New Atheists have a particular animus towards Islam, that we are bigoted towards Muslims. This is simply not the case. I think many on the far left have got the issue a bit mixed up with racism. Because a majority of Muslims are people of colour, they think criticism of Islam is racism and they have a gut reaction against racism (which is a good thing of course).

Godfrey says this: “Many of the West’s leading thinkers, from Finkelstein to Chomsky, from Gray to Hedges, have publicly denounced New Atheism as “idiotic,” “imbecilic,” and “racist,” but he has come to a different to conclusion to me – he believes the New Atheists really are racist. Further, he seems to think calling New Atheists “idiotic” and “imbecilic” is helpful. Those words aren’t any more useful from a “leading thinker” than they are from a child.

Anyway, back to New Atheism being a cult. The first criterion in the list is, “The group members display an excessively zealous, unquestioning commitment to an individual.” Now there are certainly some people who show excessive admiration towards the leaders of New Atheism. They have a star quality to them in the same way as a movie star or popular singer. That is not any different to any well known person – I’m sure Chomsky has his groupies too. That is not the standard behaviour of atheists though. In fact, Dawkins referred obliquely to this in the The God Delusion – he mentioned the saying that organizing atheists is like trying to herd cats. So while you may come across some individuals who get a bit carried away, that’s neither usual nor encouraged.

Godfrey refers to a survey where atheists scored highest in terms of dogmatism. I have no idea whether that survey is a valid one or where is came from. However, the result is not typical and is possibly an outlier. Dr Phil Zuckerman, who has been studying secularists and atheists for years has concluded that:

Godfrey also uses the argument that anti-theists were found to be “the third most toxic group on Reddit”. This ridiculous argument raises many questions to which we’re not told the answers. Who took positions one and two? Are they religious groups by any chance? How do they know that all the anti-theists are New Atheists? New Atheists are not always anti-theists, they’re just mostly anti-theism – there’s a difference.

The whole article is all about that first criterion, attacking New Atheists as being toxic, and in support of CJ Werleman’s new book, The New Atheist Threat: The Dangerous Rise of Secular Extremists. (And frankly, anyone who uses CJ Werleman as their authority is a poor judge.) He ignores the other criteria completely and it’s obvious why – none of them apply to New Atheists. New Atheism is not a cult, and the whole idea is a bit silly.