The celebration of an International Women’s Day was first proposed at an international socialist women’s conference in August 1910. It was partly inspired by a women’s day celebrated by the Socialist Party of America in New York the previous year. Initially it was about promoting suffrage for all women, and was not celebrated in New Zealand, Australia, Canada, Great Britain, or the USA, among many others. In fact, initially it was celebrated only in Denmark, Switzerland (whose women didn’t get the vote until 1971), Austria and Germany. However, as New Zealand women had obtained the vote in 1893 and Australian women in 1903, perhaps they can be forgiven. It was first held on a 8 March in 1914, and has remained on that day ever since, with more countries joining the celebrations each year.

Since 1996, the United Nations has been promoting themes for International Women’s Day, and for 2015 it’s ‘Empowering Women, Empowering Humanity: Picture It! Well, Google have done their bit, and have done one of their Google Doodles for the occasion. The speeches by the usual luminaries have been about promoting gender equality, something everyone should be able to agree is a good thing. It’s also something we’re better at in New Zealand than most countries, although we’re not there yet.

The World Economic Forum produces an annual report on the global gender gap, which takes multiple factors into account in four areas: economic participation and opportunity, education attainment, health and survival, and political empowerment. In 2014, New Zealand’s overall rank was 13th in the world. In the four categories we were 30th in economic participation, 1st in educational attainment, 96th in health and survival, and 14th in political empowerment. Below are the rankings of the top six countries, six other selected countries, and the bottom six countries: 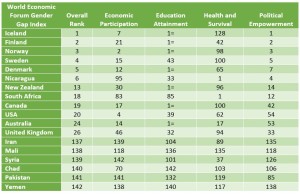 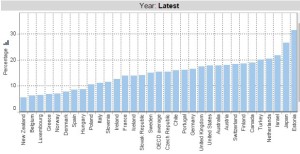 New Zealand’s result is variable. When it comes to the gender pay gap for example, New Zealand is doing better than any other country in the OECD, and the gap is steadily reducing. We’re also doing well when it comes to the education of women. Although the World Economic Forum shows 27 countries have full gender parity in education and are therefore first equal, New Zealand heads that list as we have 1.46 females enrolled in tertiary education for every 1 male. This translates to a much higher number of women than men in our professional and technical sector: 1.25 women employed for each man. There are plenty of areas where we need to improve though. Despite the fact that New Zealand women got the vote in 1893 – years before any other country – we still do not have equal representation in parliament. Further there are issues with high numbers of women smoking and having children at a young age, which is having negative long-term health effects. 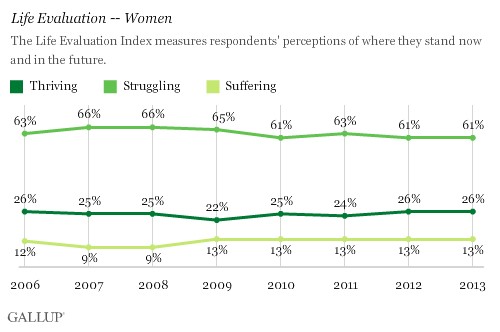 The survey was carried out in more than 160 countries. Here are the results of the top and bottom ten countries – I was pleased to see New Zealand made it into the top ten – just: 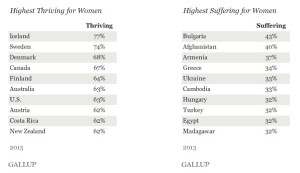 The result for the top ten countries show a pretty high correlation with the results of those from the World Economic Forum. The bottom ten in this list have likely changed since 2013 as the world’s conflict zones have changed.

The Independent has a pretty depressing report of some of the things women around the world still have to deal with. Globally, one in three women will be beaten or raped in their lifetime, 130 million women around the world have undergone female genital mutilation, and 1.2 million children (80% female) are trafficked into slavery each year.

The lot of women in secular countries has been steadily improving over the last century, but those countries where religion dominates have continually lagged behind. And the stronger the hold of religion, the worse it is for women. Europe, for example, is generally considered a pretty good place for women, and it is in most countries. But there are some countries where religion, usually Catholicism, still has a very strong hold and in those countries things aren’t so great for women. Poland, for example, comes in at 57 in the world rankings, Italy at 69, and Greece 91. 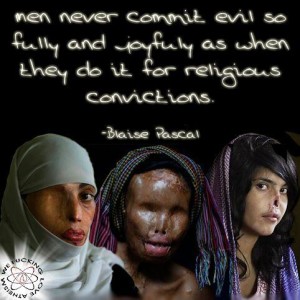 This permeation of traditional religious attitudes into government occurs in many religions in many countries with a subsequent negative effect on the lives of women. Fundamentalist Christian lawmakers in the United States, for example, are constantly trying to introduce laws based on their faith which, if they pass, are later thrown out as unconstitutional. In countries like Russia such laws pass muster, and they have seen laws introduced in recent years that have steadily reduced the rights of their citizens. In India, despite things like the caste system, child brides and bride immolation being illegal for years, they still occur often without interference from authorities because of religious beliefs. In Africa and the Caribbean, witchcraft is still a strong belief.

In countries where Sharia is the official law everyone, whether or not they are Muslim, is obliged to follow religious law. In some countries, that means women are legally obliged to obey their husbands and have lesser rights in some circumstances. Often too, the interpretation is up to the judge such as in Saudi Arabia where there is no penal code.

In my opinion, women will never receive full equality while religion, which so often elevates men over women, is allowed to be such a big part of the governance of our society.