Reader and attorney Ann German has had

bumper stickers (see below) printed. In you live in or near Missoula you may see this vehicle, belonging to a friend of Ann’s. He’s apparently happy to have his number plate in the picture too, but blurring the numbers is the printer’s policy, hence the grey blob on the number plate. 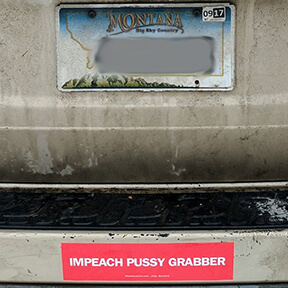 The printer, Northern Sun, won’t be putting these stickers in their catalogue, so the only way to get some is via Ann. Anyone can have up to twenty for free by contacting her.

Is a Trump Impeachment Likely?

Of course, there’s no way of knowing. However, you may recall Professor Allan J Lichtman. He has a model for predicting presidential elections and has correctly called every one for thirty years, including the election of Trump.

Anyway, he made a second prediction: that Trump would be impeached by his own congress. As the Washington Post reports:

“I’m going to make another prediction,” he said. “This one is not based on a system; it’s just my gut. They don’t want Trump as president, because they can’t control him. He’s unpredictable. They’d love to have Pence — an absolutely down-the-line, conservative, controllable Republican. And I’m quite certain Trump will give someone grounds for impeachment, either by doing something that endangers national security or because it helps his pocketbook.”

There’re already plenty of indicators that conflicts of interest are likely to arise in a Trump presidency. He will be retaining ownership of all his businesses and his three eldest children are on his transition team and sitting in on meetings with foreign diplomats. Trump has asked for security clearances for all three, and daughter Ivanka and her husband Jared Kushner will be part of the Trump administration. Personally, I think both are more capable and honourable than the president-elect, but it still looks dodgy.

Lichtman’s comment about Trump endangering national security is quite possible too. There are so many delicate situations in the world at the moment, and Trump could easily blunder in and mess something up without realizing what he’s done. He’s neither a diplomat nor a nuanced thinker, and has not been taking the opportunity to learn from the State Department. 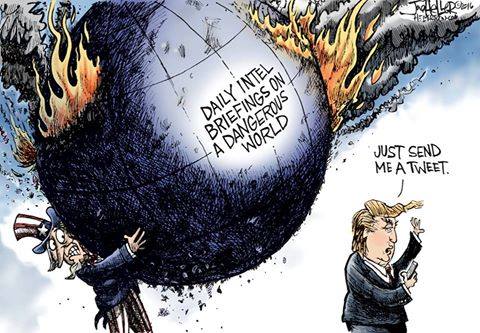 I’m worried about what will happen on the international scene with a Trump presidency. In the US itself though, I think they’re better off with Trump than Pence. His extreme conservatism could do considerable damage. For example, Trump won’t change marriage equality – Pence will try to reverse it.

What’s that Chinese curse? May you live in interesting times.