It’s been a while, but I’m back. The main problem hasn’t been me, but my computer. It’s been in the hospital most of the last two weeks, but a lovely young man called Benjamin has sorted it for me. He’s been very reasonable with his charging too, but New Zealand’s health system doesn’t extend to laptops so don’t be surprised if a begging button appears on my website in the next few weeks.

A lot has happened while I’ve been gone, and my head’s full of things to write about. The most obvious today is the result of the New York primaries. Despite looking like he was going to come close, in the end Bernie Sanders was well beaten by Hillary Clinton. The momentum he gained in the last few races has thus come to an abrupt halt, and the states coming up in the next few weeks are mostly looking more favourable for Clinton.

My teenage nephew, knowing his Aunty Heather pretty well, sent me this:

The Democratic Party is now relying on Clinton being vindicated in the FBI investigation into her use of a non-government server for her e-mails. There’s another possibility still poking his head above the parapet every now and then though – Joe Biden. 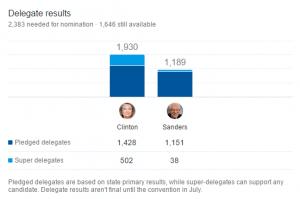 If Clinton is charged with a crime, the Democratic Convention could be as messy as the Republican one is going to be, and the party is going to want to look like the adults in the room. Enter Joe Biden, who has just given another interview on what he thinks of the current race.

John Harwood of the New York Times interviewed Biden as he took the train he has for decades between Washington DC and his home in Delaware:

“If you notice, I beat every Republican in every poll when they thought I was running,” Mr. Biden said. “You notice that my favorability was higher than anybody that’s running for office in either party.”

He’s right. However, Clinton’s favourability was extremely high before she started running for office too. Her entry into the race meant the attacks started, especially from the conservative super-pac America Rising and they have had a big effect on the public’s perception of Clinton. There’s no doubt that if Biden rode in on his white charger to rescue the party that he would become a target of negative ads as well. 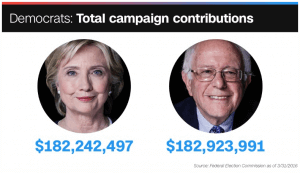 The New York primary result means that Bernie Sanders now has no path to win the Democratic nomination. There’s no reason for him to drop out of the race though. Hr still has a powerful message to present, it’s not him personally that’s doing most of the damage to the Clinton brand, and he has plenty of money. In fact he’s currently raising a lot more money than Clinton. Robert Yoon of CNN reports:

Sanders slightly edged Clinton in contributions in 2015’s fourth quarter, but his fundraising operation didn’t kick into high gear until 2016. His campaign has outraised Clinton’s every month this year by at least 50%. In March alone, “Bernie 2016” received $44.7 million in contributions, compared to $26.3 million for “Hillary for America.”

My impression is that Sanders is so good at playing the poor relation that people think his campaign doesn’t have any money. While abusing Clinton for her big money fundraising dinner with George Clooney, most of which actually went to down-ballot candidates, he’s raking in the millions.

There’s no doubt though that Sanders has raised awareness of USians that most other OECD countries, which they have been told for years they are better than, actually have it a lot better than them in many ways. And, despite being told that things like free healthcare for all would destroy the economy, countries like New Zealand and Australia have economies that are just as good or better than theirs. Socialism is a spectrum, and more of it doesn’t necessarily mean you will go the way of Greece, Venezuela, or North Korea. For all the Fox News rants about no toilet paper (that did happen in Venezuela), it’s just not reality.

In thirty years time, when the United States has single-payer healthcare and everyone wonders why anyone ever thought it would be a bad thing, the candidacy of Sanders will be looked back on as a turning point. True, others have talked about it before, including Clinton during her husband’s administration, but Sanders was the one that talked about it as a part of a whole programme and change of direction. It’s a change that the US actually needs and will occur sooner or later. I hope Sanders is around long enough to see what he achieved.