In Which I Sit in Judgment: Pat Robertson is EVIL

In the past I have taken little notice of Pat Robertson. I largely write him off as a kook, or laugh at his extreme pronouncements. Last week I thought it was a great joke to post the first video below from him. Once again, here was evidence of my opinion that he’s a complete fool.

Right Wing Watch has this to say about Robertson’s pronouncements on the American Health Care Bill:

“It’s going to go through the Senate, and we’re all going to rejoice that we’re going to pay less on health care,” he said, despite the fact that if enacted, most people would see their premiums skyrocket.

Robertson said that “he knew that the Lord was going to give Trump victory” and that God is using the president to do great things.

Of course, to the relief of millions of USians who would have lost decent health care if it had, the GOP Health Bill didn’t pass.

However, this latest pronouncement may tell us why Pat Robertson thinks his fellow countrymen don’t need health care. If they’re sick, it’s their own fault.

Multiple Sclerosis is Demonic: Rebuke it and Healing Will Occur

In the e-mail questions section of Robertson’s show the 700 Club, he dealt with this missive:

First, I just want to say I love you. (“Well, we love you too,” interjects Robertson’s sidekick.) I pray, I read the Bible, I’ve asked for healing and have been prayed over many times. What hurts the most is I feel abandoned by God when I have loved Him so much.

I have MS [and] I am chemically and environmentally sensitive, which means I am allergic to many everyday things – there are only a few foods that I can eat. I feel forsaken. I’ve been watching your show for a long time now, waiting for my name to be called when you have word of knowledge.

I’m so happy for those who say they are healed … but is healing not for everyone?

Robertson’s response to Tiffany is appalling. He starts by telling her that there was no one Jesus didn’t heal. There were some that had to go through a testing time, but he didn’t say “No” to anyone. Robertson goes on ( via Right Wing Watch):

“I know this sounds strange but I do believe there is a spiritual component in MS, it’s like a demonic—it’s one of those things that you literally have to cast out,” … “I have seen people with MS get up out of a wheelchair and push the wheelchair out of the room where we were. I’ve seen it. I’ve been involved in it.”

While he did tell the viewer to “check with an endocrinologist to see if there’s something, some chemical or something that could be done that would build up that immune system that you’ve got or if it’s something that you’re eating that’s causing a problem,” Robertson assured her that “you need in the name of Jesus to rebuke that thing and to say to your body, ‘You will be whole!’”

It’s bad enough to say these things at all. But in this instance, Robertson is saying them to someone who believes deeply in him. He’s telling her that it’s her fault that she has MS, and she would get better if her belief was strong enough.

This poor women told him she feels “forsaken”. She’s been watching his show for years, desperate for relief from her illness, believing that he can help her get better. She will feel worse than ever after this – I know from personal experience.

I was never someone to look to a character like Pat Robertson or any of the other personality cult preachers. From childhood I was pretty disdainful of religion. I found the way it saw women disgusting from a very early age, and there was a lot that didn’t make sense. Also, I was never one who thought illness or injury was susceptible to cure via prayer. However, I did have a pretty strong faith that there was a God, and He was all about love.

I’ve had a lot of really bad things happen to me and have to live permanently with the result of them. Because of my faith, there was a time when I wondered what was so bad about me that I had to deal with all this. What had I ever done that was so wrong? (Perhaps God knew I was going to become an atheist! 🙂 )

So I understand to a certain extent what Tiffany feels. She’s in a far worse situation than I ever was though. She’s constantly deteriorating, her condition will kill her, and she believes prayer can heal her.

In a way, becoming an atheist made me better able to cope with all that life has thrown at me, and continues to throw at me. It’s not my fault. It just is.

I doubt that Tiffany is in a situation where she will be able to have a better relationship with reality. I hope at least she there’s someone close to her who can give her the illusion of a loving God. One who is non-judgmental and doesn’t blame her for her circumstances.

She needs to be rescued from the evil that is Pat Robertson before her mental health suffers permanent damage, if it hasn’t already. 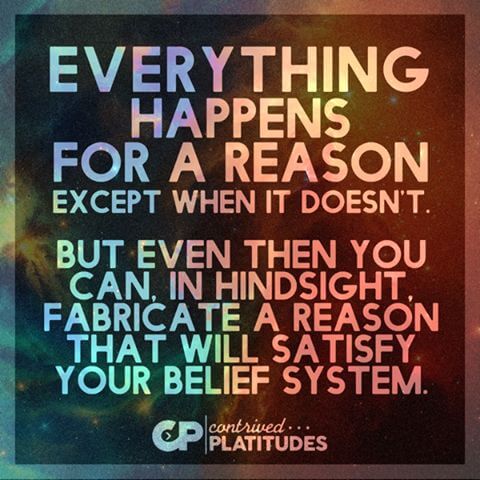